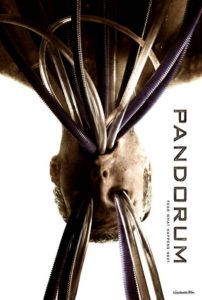 Pandorum wants too much. It wants to be eerie science-fiction. It wants to scare you with monsters and gristly horror. It wants to involve you in a mystery. But it also wants to be an action movie, so it inserts martial arts-laden fight scenes here and there. And it wants one of those all-too-popular twist endings everyone loves nowadays, so much so that it has two. Ultimately, it wants to transcend several genres at once, and by doing so become something original. Except it doesn’t realize these many goals, nor does it accomplish maybe just one or two.

The story begins in deep space. Ben Foster (from 3:10 to Yuma) wakes up in his cryogenic tube after a long sleep, so he’s left with temporary amnesia and no memory of his name nor the mission of his ship, the Elysium, a massive transport carrying thousands of earthlings, all of them frozen for their journey, or missing. The ship’s many hallways are empty. He is alone. Dennis Quaid wakes up with amnesia too. He’s the commanding officer, one in a series of shift supervisors that was to watch over the craft until they reach… where? They can’t remember. He’s in the fifth rotation of administrative officers, but there’s no sign of his predecessors. They’re only certain that the ship’s reactor is failing and they need to reboot it.

Quaid’s character, Payton, stays behind at a control station, monitoring Foster’s character, Bower, as he voyages into the unknown, during which he recalls memories about his wife and wonders where she is on the Elysium, if anywhere. But Bower discovers that he and Payton aren’t the only ones awake. Monsters of some kind scurry about the ship, screeching and setting traps for human prey. Other humans hide from the monsters where they can, doing what they must to survive. There’s an interesting scene involving one passenger, the ship’s cook no less, who holes-up in a safe room and cannibalizes anyone who comes along to keep alive. Bower teams up with the cannibal (Eddie Rouse), and a couple of other survivors (Antje Traue and Cung Le), to fight the monsters and reach the reactor, because if it shuts down everyone dies. Meanwhile, Payton never leaves his control room, but he’s not alone either. A mysterious crewmember, Gallo (Cam Gigandet), stricken with a nasty case of paranoia, surfaces and confesses his secrets, which leads to one of those twists mentioned earlier.

Space madness. Moon already covered this material earlier this year. Here’s the low-brow version, brought to you courtesy of producer Paul W.S. Anderson (Resident Evil and Death Race). That means there’s plenty of nonsensical bloodshed, loud music, and gross B-movie monsters. The creatures move about the ship, at first only shadows, and then later when they emerge, they’re seen blurred by erratic camera movements. Still, they seem familiar. Remember those white-skinned bat things from The Descent? And remember those wild alien zombie guys who constructed makeshift blades and armor in John Carpenter’s Ghost of Mars? Imagine the hellspawn produced if those two movie monsters had a bunch of babies; that’ll give you an idea of what we’re dealing with here.

Shooting in darker than dark surroundings, with only the occasional fluorescent red, green, or blue glow stick to break up the monotony of blackness, German director Christian Alvart, it must be said, has an eye for style. This is Alvart’s second film in Hollywood, the first being the maligned Renée Zellweger horror-thriller Case 39, which completed production in 2007 but has yet to find a stable release date in the United States (it’s been shifted around since 2008, so maybe we’ll see it on DVD soon). Alvart’s sets and visuals are impeccably designed. He’s clearly inspired by Ridley Scott’s Alien, probably Carpenter’s works, and most definitely Anderson’s Event Horizon, which is the closest that filmmaker will ever come to a solid film.

Foster and Quaid have more than enough onscreen intensity to keep us entertained, but what seems defunct is the script, written by Alvart and Travis Milloy. Between monsters, space madness, and the various twists throughout, it relies on cliché after cliché, and anyone familiar with the hodgepodge of genres therein will have more fun pointing out from where this or that plot point was derived than actually watching the movie. Remove one or two of the many ongoing genre threads, and Pandorum could’ve been a creepily brooding picture with class, something akin to Solaris. But the director, more likely the producer, preferred to tell a muddled story more interested in flesh-eating beasties than thoughtful science-fiction.