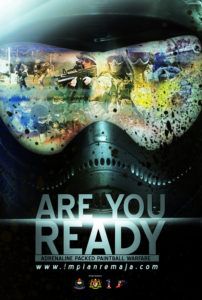 Imagine it. You’ve paid big bucks to be shrouded and driven into the woods with a group of people you’ve never met. Armed with a paintball gun that shoots painful but otherwise harmless pellets, you’re ultimately playing war, the next step up from videogames simulating combat. Other teams are in the woods with you, and you’re all competing for the same goals. At each checkpoint, a flag marks a box with a helpful item left inside. Luckily, your team finds the box first. Inside is a bullet-proof vest, but why would you need that on a paintball field? You find out why when one of your teammates goes down, dropped by a headshot from a real gun.

According to director Daniel Benmayor, the intention of his movie Paintball was to make a thriller that offers the same exhilaration of the game being played onscreen, and then twists the game into something deadly and real and confrontational. To accomplish this, Benmayor uses gritty handheld photography to give his audience a sense of being there. He places his characters and audience in the middle of nowhere and gives them no idea what’s going on. Then he slowly reveals, piece by piece, an absurd conspiracy, while never easing up on the tension. In a way, what Benmayor has done is brilliant. In another way, his approach is far too simplistic to keep his audience involved.

Consider the characters. There are none. Sure, names are uttered and dialogue is spoken. But not until the last twenty minutes, when there’s only one player left, is there anyone to root for. Everyone’s decked out in camouflage and goggles so they’re hard to distinguish from one another, and their personalities meld together in a mess of shouting and arguing about what to do next. The group of strangers gets whittled down one by one in gory violence, by a lone hunter observing them from afar through thermal imaging goggles, picking out the weakest of them. Eventually, we learn the hunter is being instructed by someone on a walkie-talkie, telling him who to kill and who to let be. But to what end?

Instead of being a dynamic, tension-ridden venture into the nature of our desire for self-exhilaration, the movie crumbles into a thinly disguised combination of a slasher movie and Hostel. It seems to dwell on the blood and gore a little too much to mean anything significant. Indeed, this is exploitation, well directed though it may be. The camerawork makes sure to use point-of-view shots from the hunter’s thermal images to get close-ups of his victims’ gruesome deaths. And though the carnage is rendered in whites and grays, its effect still places the audience in the disturbing, uncomfortable position of the killer.

There’s no commentary made about much of anything, no smarts, and certainly no remarks about the inanity of yuppies suiting up in the woods to shoot each other with fake bullets. What Benmayor does best is create a stage for anxiety and chaos. The frenzied characters scream and behave without much logic behind their actions, and panic becomes the main emotion of the film. Had Benmayor taken the time to build tangible characters, his directorial flourishes may have paid off, perhaps even enough to forgive the slasher setup.

IFC picked up the film, which debuted at the Tribeca Film Festival last year, for U.S. distribution. Made in Spain, the languages spoken are in English, not dubbed. The movie isn’t something that will play at a theater near you, but that’s probably for the best. It’s not exactly worth seeking out. Paintball is an experience that will work best on the small screen. Watch it now On Demand or pick it up for a rental. The temporary thrills are an empty if entertaining way to spend (almost) 90-mnutes.