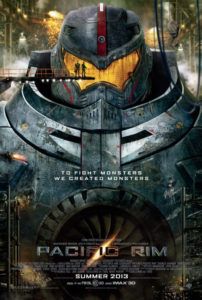 When towering monsters emerge from another dimension to destroy our planet, humanity puts its differences aside to fight the threat with giant robotic suits. Whether you call it an enlarged rethinking of the Japanese kaiju genre popularized by Godzilla (1954) and the TV show Ultraman, or a live-action take on mecha anime like Neon Genesis Evangelion, Guillermo del Toro’s Pacific Rim certainly has its inspirations. The director of Hellboy and Pan’s Labyrinth borrows familiar elements from countless movies—including Gamera (1965) and Michael Bay’s Transformers—to create his own distinctive visual interpretation of geeky genre tropes. Though, even the uninitiated will notice Travis Beacham’s screen story and characters are formulaic at best. However, moviegoers familiar with the Monsters vs. Robots trend, with its origins in Japanese culture, will appreciate the ever-abundant details del Toro incorporates into this giant-sized blockbuster, which has been seemingly designed to fanboy specifications.

In a lengthy expositional preamble, intermittent narrator Raleigh Becket (Charlie Hunnam) sets up the not-too-distant future where giant alien creatures materialized out of a portal coming from who-knows-where. Rising from the depths of the Pacific Ocean, these slow-moving, mostly amphibious, colossal monsters destroyed cities and killed thousands, until humanity launched the “Jaeger Program” that is. Pooling inconceivable resources, the world’s governments joined forces to build dozens of skyscraper-sized robots, each co-piloted by two humans connected to one another in a psychic link called “The Drift.” Soon the kaiju grew stronger and emerged more frequently, though, until jaegers were no longer seen as a viable option. When the alternative—a massive security wall built on every coastline—proves ineffective, the oddly named jaeger program leader Marshal Stacker Pentecost (Idris Elba) organizes one last shot for the jaeger to save humanity.

As Pentecost’s crews prepare themselves for a final showdown, the script co-written by Beacham and del Toro degrades into a jaeger pilot soap opera. First, there’s the hotshot pilot Raleigh, whose brother dies in the prologue. He’s convinced to rejoin the program by Pentecost himself, and then he must find a suitable psychic match with whom he’s compatible. Ushering Raleigh through the selection process is specialist Mako Mori (Rinko Kikuchi), and a good portion of the film is spent asking whether or not the most obvious candidate—Mako herself—is ready to be Raleigh’s co-pilot. The quick answer: She’s ready. Meanwhile, two comic relief scientists played by an over-caffeinated Charlie Day and an over-acting Burn Gorman try to determine what makes the kaiju tick. This leads to Day’s Dr. Newton Geiszler seeking out a monster brain from Hannibal Chau (del Toro favorite Ron Perlman) in a silly-but-sort-of-fun role as a black marketeer of kaiju body parts. All the while, characters reference the uncertain notion of the psychic “Drift,” but nothing very compelling develops from this unnecessary plot element aside from a predictable romance.

Although del Toro incorporates a needed degree of humanity into this decidedly inhuman yarn about immense monsters and robots smashing each other to bits, the least involving aspects about Pacific Rim are the characters and their often cheesy, clichéd interactions. The heroic American never breaks his cool, ever level-headed and ultimately boring. The Japanese girl peeks from behind her door at the shirtless American across the hall, and then she scurries away when she’s caught spying. The stone-cold leader addresses the troops just before the final battle, and we expect that, at any moment, he’ll break into Bill Pullman’s presidential speech from Independence Day (“We will not go quietly into the night! We will not vanish without a fight! We’re going to live on, we’re going to survive. Today we celebrate our independence day!”). The scientists jabber on with their endless psychobabble, causing the occasional chuckle with their wacky eccentricities. It’s all very familiar but certainly watchable, while del Toro’s handling of the more fantastical material is never less than expert.

From the design of the monsters and jaegers to the full realization of this futuristic sci-fi world, del Toro has injected several full doses of detail into his production. It’s teeming, overflowing with visual stimulation—the stuff that makes Pacific Rim worthwhile. His color palette pops with bioluminescent monster fluids and glowing robot technologies. His world has been wonderfully conceived and ornamented by his production designers, Andrew Neskoromny and Carol Spier, particularly the last half of the film in futuristic Hong Kong, where neon lights and ever-present rain recall a more radiant version of Blade Runner. Buildings are constructed around the remains of fallen kaiju; the tall interior of the jaeger home base known as the “Shatterdome” continues endlessly into the backdrop; and the most thrilling fights are set amid tumultuous ocean waves. As the movie’s enormous titans collide in grandly conceived battles, cities crumble under their feet, and there’s more destruction than in some Roland Emmerich movies.

But unlike the genre samplings that preceded Pacific Rim, del Toro isn’t working with scale models on a B-movie set somewhere on the Toho backlot. He’s playing with a reported $180 million budget and virtually complete creative freedom. Soaring special FX achieve inspired CGI sequences where size and gravity seem to have a real bearing on these sky-high robots and monsters, who move with a speed relative to their considerable weight. Del Toro’s attention to detail in this regard is crucial, leaving the movie’s more exhibition-based fight sequences feeling as though they’ve each been shaped by the director’s personal touch. Sure, the characters may be dull, but they’re just interesting enough to keep us involved until del Toro’s pure showmanship takes over. And when it does, it’s nothing short of wowing. Made to be seen on a stories-high screen with a jumbo tub of popcorn on your lap, Pacific Rim is serviceable summer entertainment, recommended based on the sheer scale of del Toro’s onscreen spectacle.