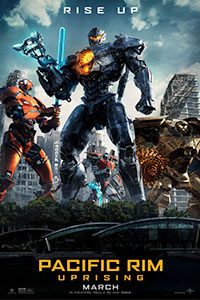 Despite its hollow characters and thin anime plotting, 2013’s Pacific Rim featured loving attention from director Guillermo del Toro by way of a million fascinating details embedded into the dazzlingly realized mise-en-scène. Del Toro’s rain-drenched, nighttime fight sequences between towering robots and bioluminescent monsters called Kaiju made enduring an otherwise absurd movie worthwhile for theatergoing audiences (less so for home viewers). But the Mexican auteur wisely chose not to helm the sequel, Pacific Rim Uprising, and instead shot an Oscar-winner for Best Picture and Best Director, The Shape of Water. For this megabudget sequel, Steven S. DeKnight, with just a few television credits to his name (Angel, Smallville, Daredevil), makes his feature film debut on a tentpole no one in the U.S. really wanted. Nonetheless, the original performed extremely well overseas, and so will the follow-up, even though it continually reminds us of how unnecessary and bland it is.

In case you’ve forgotten, or maybe you’ve just stumbled upon this review by accident and have decided to keep reading, Pacific Rim involved the Kaiju arriving on Earth through an interdimensional portal in the Pacific Ocean. The colossal, city-toppling beasts were sent by an alien race determined to wipe out humanity because, well, that’s what aliens do. Responding to the threat, humans built gigantic machines called Jaegers, each with names like Gypsy Danger and Crimson Typhoon seemingly designed to sell trading cards and toys. They look like larger versions of the robots in disguise from Michael Bay’s endless Transformers series, yet they move with a silly weightlessness. Each Jaeger requires two human pilots to be “drift-compatible,” meaning they must complete a “neural handshake,” because the Jaeger’s mental interface would “be too much for the human brain” otherwise—not that any of this makes much sense. Regardless of the first movie’s conspicuous property damage (and presumably high amount of collateral damage) in the wake of Kaiju-Jaeger battles on the cityscape, the humans saved the planet and sealed-off the alien entrance into our dimension.

Fortunately, Pacific Rim Uprising has a more compelling leading man than Charlie Hunnam, whose character Raleigh Becket doesn’t appear here and remains mentioned only once. John Boyega plays another rambunctious and playful hero, following similar roles in Attack the Block and Star Wars: Episode VII – The Force Awakens, as Jake Pentecost, whose father (Idris Elba) sacrificed himself in the first movie’s climax. Boyega’s motormouthed Jake faces his father’s legacy, as he’s wrangled back into the Pan-Pacific Defense Corps after being captured selling scrap parts on the black market. Scott Eastwood plays Nate Lambert, the straight-arrow next to Boyega’s wiseacre. Alas, Hollywood keeps trying to make a star out of the young Eastwood, not realizing that just because he looks like his father Clint doesn’t mean he carries the same screen presence, gravitas, or talent. Much livelier is teenage orphan Amara (Cailee Spaeny), a loner mechanic who’s assembled her own smaller, cuter Jaeger named Scrapper (the resident Bumblebee). Amara joins a classroom of new cadets under the training of Pentecost and Lambert, and our young heroes engage in a lot of juvenile banter and forced, unfunny humor that’s supposed to bond us to the characters but doesn’t.

The screenplay by DeNight and three other credited writers introduces several threats that keep the viewer’s head spinning from their nonsensical progressions. There’s the Jaeger rival, Shao Corporation, led by Mrs. Shao (Jing Tian), who’s trying to replace all Jaegers with autopiloted drones designed by wacky scientist Dr. Newton Geiszler (Charlie Day). There’s a mysterious unregistered Jaeger that seems intent on destroying the Pan-Pacific Defense Corps. But soon Shao’s drones mutate into dangerous Jaeger-Kaiju hybrids capable of opening another interdimensional portal to bring more Kaiju into this dimension. Before long, several Kaiju combine into a super-Kaiju-monster-thing that sets its many-eyed sights on destroying the planet through Mt. Fuji. All of the action takes place during the daytime, allowing for a sunnier, more cartoony, less dynamic looking experience than Del Toro’s original. And as the three editors cut between the Jaeger pilots and the CG-animated battles, one cannot help but note the distinction between two worlds—a live-action world of actors in Power Ranger costumes, interacting with digitized controls in front of lousy green screens; and a world composed entirely of computer animation. Altogether, the humans feel out of place.

A dopey production, Pacific Rim Uprising somehow denies the viewer the mindless joys or sense of discovery of Del Toro’s movie. Beyond the hyperbolic scenario of giant robots and even more giant monsters attacking each other with building-sized weaponry, the script boasts a notable twist involving an unlikely human villain, but the result is laughably hammy, and not in a pleasant way. DeKnight seems determined to avoid emotionally resonant characters or situations, leaving the experience entirely uninvolving, even for a Hollywood blockbuster. It doesn’t help that two of the best performers (Jing Tian and Rinko Kikuchi) have comparatively less screentime next to the teen cast, but then DeKnight seems to aim the material at a younger demographic. The entire movie has an uncomfortable Independence Day: Resurgence feel, in the sense that the sequel is pointless, doesn’t understand what made the original work, and it’s too eager to appeal to a new audience (after all, it’s only been five years). The whole thing has a forgettable quality that almost deletes itself from your memory in the minutes and hours after seeing it. In thirty years, one suspects Pacific Rim Uprising will make an appearance on Mystery Science Theater 3,000 alongside various chapters from the Gamera, Gorgo, and Godzilla franchises.