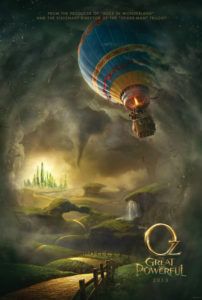 In 1939, Metro-Goldwyn-Mayer produced the cultural milestone The Wizard of Oz, based on the works of L. Frank Baum, a fantastical adventure and top-notch production forever saturated into our pop-culture awareness. In the years since, an excess of references to that film—from its enduring visual iconography to almost religious recitations of “we’re not in Kansas anymore” at the hint of dangerous displacement—have left it so overexposed that, except for the very young, it might be impossible for cinephiles to lose themselves in the story anymore. It’s a classic whose immeasurable popularity has hindered its initial delight. When Walt Disney Pictures took over the rights, they attempted to recreate the original’s magic in 1985 with Return to Oz, a morbid “unofficial sequel” that opened with Dorothy in a mental institution about to receive electro-shock therapy at her insistence that the Land of Oz really exists. That film all but flopped and never captured the hearts of anyone outside of cult audiences. Disney’s latest endeavor to revive Baum’s wonderful world, Oz the Great and Powerful, will no doubt perform well for the studio, but there’s nothing so timeless about the production to forever establish its place in film history.

An “unofficial prequel” to the original and not based on any particular Baum text, the film comes from director Sam Raimi (the Spider-Man trilogy) and a screenplay by David Lindsay-Abaire (Rise of the Guardians) and Mitchell Kapner (The Whole Nine Yards). More than $200 million was put into the production, including big bucks for its all-star cast, exhaustive computer-generated FX, and a 3D presentation. Using Tim Burton’s billion-dollar earner Alice in Wonderland as a blueprint for success, Raimi ushers the audience into a green-screen world of animated creatures and contemporary humor for an unimaginative ride. Although Raimi’s bland film is far more watchable than Burton’s popular abomination, Oz the Great and Powerful never wisps the audience away and remains only a serviceable family adventure. Characters are just mildly charming, the CGI backdrops are at times surprisingly cheap looking, and the story tick-tocks along in a predictable fashion, hoping to distract its audience from the dull narrative by employing a profusion of spectacle. When it’s over, we realize how almost every aspect of the production has been boringly attuned to crowd-pleaser specifications, and the film’s banal qualities are altogether forgotten.

Opening with a slick use of black-and-white and early cinema’s 1.37:1 Academy aspect ratio, the film’s impressive title sequence is followed by scenes mirroring the original’s opening: an introduction to the protagonist, followed by a tornado that carries us away to the Land of Oz, where the frame expands to widescreen, and the color palette dial turns up to eleven. Our hero is Oscar Diggs (James Franco), a low-brow circus magician performing under the name Oz. A con-man and heartbreaker, Oz finds himself in the adoring arms of Theodora (Mila Kunis), a good witch who believes Oz will fulfill a prophecy to save the Land of Oz by killing the wicked witch Glinda (Michelle Williams) and taking over the throne at the Emerald City. Just one look at Theodora and her sister, the good witch Evanora (Rachel Weisz), and we know the adjectives “good” and “wicked” have been labeled incorrectly. It takes more than half the film for Oz to figure out what we’ve gathered from Theodora and Evanora’s dark visages and Glinda’s blonde locks. Meanwhile, much like Judy Garland’s Dorothy did, Oz accumulates friends on his yellow brick road journey, including the flying monkey butler Finley (voice of Zach Braff) and the porcelain China Girl (Joey King). The degree to which Oz the Great and Powerful borrows its structure from The Wizard of Oz in this respect is negligible, but apparent, and speaks to the film’s lack of creativity.

Eventually, the wicked Evanora turns her lovelorn sister into the green-skinned Wicked Witch of the West to exact jealous revenge on Oz, and Kunis demonstrates how splendidly miscast she was in the role. She’s incapable of duplicating Margaret Hamilton’s grating laugh or demonic presence under her silly-looking makeup. The same miscasting conundrum applies to several cast members, the most obvious being Franco, who worked with Raimi on the Spider-Man trilogy. He’s a tremendously modern actor, incapable of behaving with required old-fashioned mannerisms from behind his patchy goatee; it never feels like a magician was transported to the Land of Oz from Kansas circa 1905, rather, that he was transported from 2013. Although humorous at times in his pathetic swindler routine that endures and endears throughout the film, Franco was the wrong choice. On the flip side, Weisz is an actress capable of acting on the appropriate timeline. She’s an epitome of alluring evil, just as Williams’ heartwarming beauty is pitch-perfect in the role of Glinda. Williams is just gorgeous in her role. As for Finley and China Girl, their inclusion feels perfunctory at best, with almost no dramatic arcs of their own; unlike their Cowardly Lion, Tin Woodsman, and Scarecrow counterparts, they feel present only to keep the kiddies entertained with something cute onscreen.

Occasionally, Raimi’s camera utilizes the director’s signature in-your-face style, such as the deadly Dark Forest flower POV shot, or during the finale when a witch resembling one of the “Deadites” from Raimi’s Army of Darkness (1992) shows up for a jolt. Evident is how Raimi’s strengths reside in either unrelenting horror like Drag Me to Hell (2009) or tempered thrillers such as A Simple Plan (1998). As is, Oz the Great and Powerful feels more like the unfocused overabundance on display in Raimi’s disappointing Spider-Man 3—another film more concerned with FX than a cohesive storyline. His orchestration of the admittedly funny and clever climax, where Oz uses a projection of himself to outwit the wicked sisters, doesn’t make up for the rest of the film’s inability to make us love these passable characters. The result isn’t bad and incites the intermittent chuckle, but it ultimately fails to fill The Wizard of Oz’s shoes (Or should it be ruby slippers?). Granted, no film could live up to those expectations, and so why bother? That’s how we end up feeling about the entire production—Why bother? If only someone involved would have realized the futility of Oz the Great and Powerful earlier, we might have been spared a middling effort from a director whose films are more often than not artfully made and inspired visceral experiences.