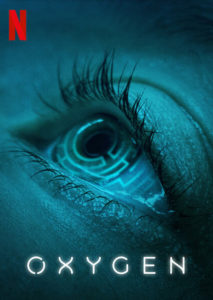 Alexandre Aja surprised everyone in 2019 with his creature feature Crawl, a simple thriller that pitted one woman against two alligators during a hurricane. His latest, Oxygen, offers a similarly claustrophobic scenario and the first French-language movie helmed by Aja since his 2006 breakout, High Tension. Like the minimalist Crawl, it proves Aja knows how to enliven and maneuver around a limited space, giving his performers room to shine. Here, Mélanie Laurent takes center stage as an unnamed, amnesiac woman who awakes in a cryogenic chamber and discovers her air will run out in about 100 minutes, the length of the movie. Accompanied only by the resident computer program named MILO (Mathieu Amalric), Laurent must squirm around a tight space and uncover secrets from her past that will lead to her survival. Best viewed as a showpiece for Laurent, star of Inglourious Basterds (2009) and Beginners (2011), Oxygen is a tense but unsatisfying experience.

Aja’s output since coming to Hollywood has been notably gory but usually disappointing, if only because his visual sense shows obvious skill—the scripts have been the problem. Crawl was a step up from the French director’s gristly horror remakes, the defensible The Hills Have Eyes (2006) and the deplorable Piranha 3D (2010). Like Crawl, Oxygen shows that Aja can do more with less, and the script by Christie LeBlanc offers a single location for Laurent to explore, albeit not without twists and digressions. When Laurent wakes up, she frees herself from a thin membrane only to see that she has been strapped down inside a Cryoslide-brand pod with tubes and wires penetrating her body. She has no memory of who she is or how she got there, and MILO explains that her name is listed as Omicron-267. She must have been deathly sick and frozen in cryo-sleep, she assumes, while doctors figure out how to cure her. Unfortunately, only 34% of her oxygen reserves are left, and those will run out in just over an hour.

The first third of Oxygen reminds us of Rodrigo Cortes’ Buried (2010), a superb thriller that never leaves the coffin in which Ryan Reynolds was buried. Aja remains with Laurent for much of this time, exploring the limitations of her situation and gizmos that will prove essential later on. Cinematographer Maxime Alexandre moves fluidly within the chamber, often employing POV shots to explore the space. Aja and Alexandre shoot Laurent from every conceivable angle, so the visuals never become stale. Much of this first section involves Laurent asking questions to MILO, who was clearly modeled after HAL from 2001: A Space Odyssey (1968). However, it doesn’t have the quiet menace of HAL—it’s more of an unthinking, functionary system with limitations Laurent must learn to help herself out of her predicament. MILO answers what questions it can, but it doesn’t intentionally conceal information. It’s only threatening in the sense that it doggedly follows protocol and doesn’t help Laurent problem solve.

Aja’s commitment to this sci-fi-infused buried alive situation breaks down before long. LeBlanc’s screenplay and editor Hervé Schneid find reasons to deviate from the single location and cramped interior world of the cryogenic pod, whether through flashes into the main character’s memory or the occasional hallucination. Laurent also has access to elaborate data files, videos, and images from her past—displayed in the hand-swiped format borrowed from Minority Report (2002)—that she uses as clues to find a way to escape. For example, when she watches a video of her former self or husband (Malik Zidi), Aja takes us into the video for some visual variety. Meanwhile, the recurring image of lab rats makes us wonder whether this is all some behavioral experiment. Indeed, Aja doesn’t commit to the trapped-in-a-pod setup as thoroughly as other filmmakers like Cortes have, and it feels like he’s conveniently bypassed making a more difficult film.

Still, Oxygen is entertaining for its duration, though not without moments of questionable credibility for even casual sci-fi aficionados. And despite its loose devotion to the claustrophobic setting, it’s nonetheless an impressive example of slick filmmaking under pandemic conditions. Aja shot the film in July 2020 during the COVID-19 pandemic, and scheduling difficulties meant the originally cast leads, Anne Hathaway and then Noomi Rapace, had to back out. The finished product has landed on Netflix, where it plays in English on default, requiring the viewer to pause the movie and select French language and English subtitles for the original experience. There, it aligns with the standard disposable-but-watchable content usually featured on the streaming service. If there’s a reason to pass the time with Oxygen, it’s Laurent, who convincingly portrays a character going through psychological and physical strain, even if her performance is better than the movie that surrounds it.