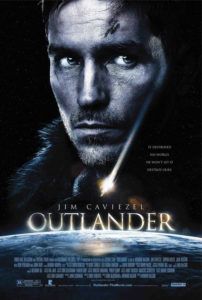 Guilty pleasures and B-movies. For avid movie watchers, they fill late nights, rainy days, and lazy Sunday afternoons. Almost universally panned by critics, fans make them into “cult classics” and “campy hits”—movies that generally don’t find their audience until cable television or home video. To make up for their meager budgets and lack of star power, entertainment value becomes the priority, ironic or otherwise. So while production quality may be lower, their desire to keep you amused is admirable, if not sometimes pitiable because of their desperate failure to be something better.

Outlander presents an exception because underneath its B-movie appearances are notable actors engaged in an exceptionally strange mishmash of genres that somehow elevates itself beyond its limitations. The chief drawback is the scenario, which involves a space traveler in ancient Norway who teams up with a band of Vikings and hunting a dragon-like alien. Explain that plot to anyone with enthusiasm, and justifiably, you’ll be labeled a nerd. Indeed, the material is best suited for a Sci-Fi Channel Original, in the same category as Attack of the Sabretooth and Frankenfish.

Co-producer Barrie Osborne (The Lord of the Rings and The Matrix) might have something to do with how this film’s setup lifts itself to the level of high drama, or at least high fantasy. Then again, perhaps the relatively unknown director and co-writer Howard McCain’s desire to extract the severity of Beowulf comes across onscreen too. But permeate a sense of seriousness, and allow the quality of the production to wash over some of the more obvious low-budget effects, and suddenly this bizarre combination of science-fiction-meets-period-swordplay-epic becomes something that deserves your attention.

James Caviezel (The Passion of the Christ) stars as Kainan, a human-alien who crash lands on the “abandoned colony” of Earth circa 700 A.D. His spacecraft sink to the bottom of a lake, and he quickly finds himself held captive by an unruly bunch of Vikings who call him “Outlander.” King Rothgar (John Hurt, perfectly cast) believes the stranger decent, whereas the warrior Wulfric (Jack Huston) doesn’t trust him. No one believes his claims that a dragon of sorts has attacked and killed everyone in a nearby village, ruled by violent warrior Gunnar (Ron Perlman, also perfectly cast). And when Kainan slays a massive bear, everyone is more than happy to blame the animal for the recent attacks. At least his kill earns him the affection of the King’s feisty daughter, Freya (Sophia Myles).

Only when seeing the creature that Kainan has warned them about does the village finally believe his story. Dubbed a Moorwen, the creature is the last in a species Kainan’s people wiped out while terraforming another planet. It glows like a neon light to attract its prey and kills everything in its path. Creature designer Patrick Tatopoulos, whose work appears in Bram Stoker’s Dracula and Stargate, conceived the bioluminescent Moorwen to resemble a predator of the lion or tiger variety, only ten feet tall and sporting a flickery tail. Kainan leads the hunt for the creature, yet he harbors feelings of guilt for making it an endangered species.

McCain shoots through dark, muted filters, using bluish exteriors and ocher interiors, and refreshingly, he doesn’t employ any hip camera tricks to overly finesse his otherwise straightforward kill the monster tale. But take the skeletal story with a grain of salt. While you could argue that McCain’s yarn delves into classical themes of heroism and honor, the cynical reality is that his adventure cares more about snarly Vikings, hungry aliens, and the spraying of blood when the two engage. Plenty of ewww moments occur, like when the Moorwen’s tail decapitates Gunnar, and instead of clapping and hooting, we gasp. Another filmmaker might prefer the clapping and hooting during these scenes; McCain wants his story taken seriously despite itself.

Directors like Paul W.S. Anderson and Uwe Boll give B-movies a bad name by making them notoriously tacky and just plain awful—any screening of Death Race or In the Name of the King: A Dungeon Siege Tale confirms that. McCain has a way of keeping his story entertaining while also imbuing a sense of dignity, all while maintaining a B-movie sensibility.  Of course, hold the product up to any A-list motion picture and its allure falters. But look at Outlander for what it is, what it’s trying to do, and just go with it. Though not for everyone, just those with a taste for multiple genres blended in an offbeat manner, the result might surprise you.