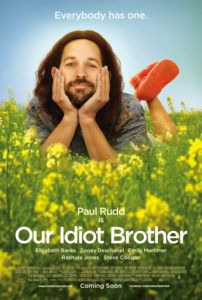 Our Idiot Brother is a different kind of comedy, a refreshing one, not one driven by typical Hollywood plot contrivances, though the majority of its performers have all made those kinds of movies. Taking a low-key cue from its main character, the oh-so kindhearted biodynamic gardener and general space-case Ned Rochlin (Paul Rudd), the film plugs along without much confrontation or dire conflict. Ned is an incurably sweet man, always smiling, and very dumb in a common sense way. The trouble is he’s too honest. In one scene on a subway, he counts a wad of cash and suddenly drops his can of soda; he apologizes to everyone around him for spilling, and then hands his cash to a stranger to hold as he cleans himself up. Ned’s philosophy toward life is simple: Put your trust out there, and chances are people will respond with kindness. This philosophy rarely works in Ned’s favor.

Case in point, the film opens when a uniformed cop approaches Ned’s farmer’s market stand and tells Ned he’s had a tough week, and then asks Ned for some marijuana. Ned offers him a bag for free, out of the kindness of heart. But the cop insists on paying, so Ned accepts the cash. Busted. After he gets out of jail early for being named “model prisoner” four months in a row, Ned returns to his small farm where his girlfriend (Kathryn Hahn) has assumed the property and left him for another stoner (T.J. Miller). The worst of it is, his ex won’t give up his beloved dog, a retriever named Willie Nelson. Ned isn’t stupid per se; he simply doesn’t understand that most people lie and cheat their way through life; whereas Ned is honest to a fault, but never in an intentionally cruel way. He just says what he feels, but sometimes that gets him into trouble.

Homeless and worst of all dogless, Ned moves back in with his mother, Ilene (Shirley Knight), the sort who always has a full glass of wine in her hand. From there he’s handed off to each of his three sisters, beginning with Liz (Emily Mortimer), an overprotective mother who’s considerate enough to convince her crabby, documentary filmmaker husband (Steve Coogan) to give Ned a job. Before long, Ned inadvertently destroys Liz’s family and he’s passed to another sister, Miranda (Elizabeth Banks), a cutthroat writer for Vanity Fair who uses Ned’s uncanny ability to get people to open up to secure herself an exclusive interview. Of course, Ned botches Miranda’s plans and he’s discarded to his final sister, Natalie (Zooey Deschanel), a sexual being who betrays her lesbian lover Cindy (Rashida Jones) when she cheats with a man.

Rudd is perfectly cast here, his customary genial presence augmented by his Lebowski-esque performance, complete with bushy beard and Crocs. As Ned’s high-strung sisters shout at him for ruining their lives by divulging their secrets, Rudd has this incredible blank, everything’s-gonna-be-okay look to him that’s almost indescribably funny. His expressions of confusion and obliviousness are the film’s primary source of laughs, while the drama, disguised as realism, approaches pure (and joyous) sentimentality by the end. The rest of the A-list castmembers fulfill borderline one-dimensional roles and are never more interesting on their own than they are when Ned’s in the room. Rudd is so perfect and innocent that the greatest moment in the film comes not when Ned inevitably patches things up with his sisters, but when he’s reunited with Willie Nelson.

There are some apparent on-and-off-screen parallels here, since Our Idiot Brother was directed by Jesse Peretz and co-written by his sister Evgenia Peretz, an editor for Vanity Fair, and David Schisgall, a documentary filmmaker. Is Jesse the idiot and Evgenia the snooty sister? How much is true and what’s imagined, frankly, I’m not very interested in. The Weinstein Company picked up their film from Sundance this year and have given it a strong end-of-summer push, easing audiences out of the abrasive, raunchy comedies from earlier in the year (The Hangover Part II, Horrible Bosses, The Change-Up) and into the elevated arena of autumn cinema. But given the studio’s track record, the filmmakers are lucky it was released at all. We’re lucky too, as Rudd’s performance and the lighthearted laughs make this an easygoing comedy, one whose laid-back protagonist and casual vibe are easily consumed, enjoyed, and fondly remembered.