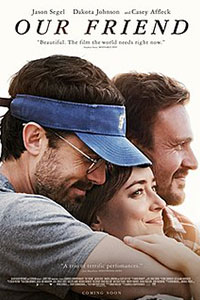 Around Christmas in 2013, Dane visits his close friends, Matt and Nicole, a couple with two young girls. Nicole is in the hospital after a cancer diagnosis, and so Dane agrees to take the family’s sick pug to the veterinarian. The poor dog has to be put down, for cancer no less. Matt doesn’t want to tell the girls, because it could lead to the girls linking cancer and death to their mother. At this, Dane offers to be with the dog in her last moments; then, he offers to live with the family for a while, helping as a caregiver and handler of other, more practical matters. He uproots his life in New Orleans and moves to Alabama, where he takes a small bed in their laundry room. The initial plan for “a couple of weeks” turns into two years. Our Friend tells a true story, based on Matthew Teague’s essay “The Friend,” published in Esquire in 2015. The essay acknowledges the mundane reality of death and considers how unprepared we are for what’s coming, and how most support systems have limits. The film, directed by Blackfish (2013) helmer Gabriela Cowperthwaite, proves just as devastating.

Our Friend dramatizes Teague’s account with raw performances and only a touch of sentimentality. Screenwriter Brad Ingelsby resists adapting the source material into the saccharine style of a tearjerker. The story centers on Matt (Casey Affleck) and Nicole (Dakota Johnson), whose mutual friend Dane (Jason Segel) helps relieve some of the pressure throughout Nicole’s battle with ovarian cancer. He’s just immature enough to entertain their daughters, but he’s also responsible and caring enough to take some of the burden off of Matt as Nicole continues to decline. Thankfully, no one goes into the situation a saint: Dane struggles to find direction in life, working thankless jobs and managing his depression; Matt’s career as a journalist keeps him away from home; Nicole has an extramarital affair. In a cruel twist of fate, they all manage to be their best selves while managing Nicole’s cancer. You can feel their friendship deepen and the easygoing warmth between these people in their scenes together.

The film’s structure resembles how Teague’s essay makes emotional connections with no interest in linear storytelling. Remembrances are like that; they leap around in time, flowing with the inner thoughts of the author. While that may work in an essay or novel, it can be somewhat difficult to keep the progression of events straight in a film. What begins in 2013 leaps back 13 years earlier or other temporal landmarks along the way. Titles appear onscreen to announce the time and place, as if being typed on Teague’s laptop, suggesting the film is the written story. But Cowperthwaite and editor Colin Patton might have been better served by making a more straightforward narrative, perhaps with more purposeful reasoning for the flashbacks. For instance, flashing back to Dane’s solitary journey into the wild provides background for his decision to devote himself to Nicole and Matt. But in the film’s flurry of flashbacks, its significance isn’t as pronounced as it might’ve been in a structure with fewer flashbacks. 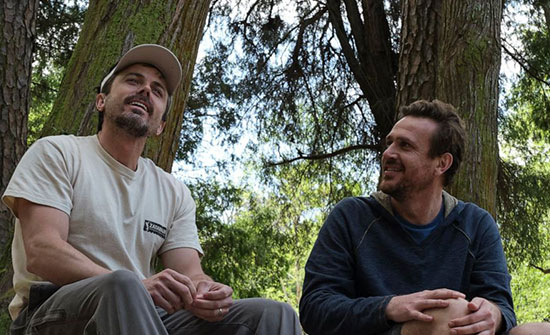 And frankly, I could be a cynical bastard like some critics and demean Our Friend for exploiting maudlin material, for not getting into the grotesque details of Nicole’s suffering. Stories about patients afflicted by cancer, from My Life (1993) to My Sister’s Keeper (2009), often ignore some of the more horrific things that happen to the human body as death approaches. They prefer to tug at our heartstrings in a barefaced manipulation of our emotions rather than show the detail, such as, for example, excrement coming out of Nicole’s front and stomach acid eating away at her flesh as described in Teague’s essay. But I appreciated the line that Cowperthwaite walks: somewhere in-between aggrandizing Dane as an angel and traumatizing the audience with every detail of Nicole’s suffering. The film does neither, preferring to exist somewhere in the middle, where it’s neither a weepy Hallmark movie nor a shuddering evocation of Michael Haneke’s Amour (2011).

Our Friend is at its best in the unpretentious scenes between Dane and the family, where the actors, uniformly excellent, breathe life into their characters. When Cowperthwaite attempts a kind of Malickian soulfulness as Joe Anderson’s camerawork begins to resemble Emmanuel Lubezki’s searching style, the viewer might begin to feel handled. Fortunately, those moments are few, and the performances remain central. Affleck’s presence brings to mind Manchester by the Sea (2016), which cannot help but evoke tears. Segel once more plays the ultimate best friend (see 2009’s I Love You, Man), a guy who seems effortlessly charming and would always have your back; though his dark side is achingly relatable as well. Johnson has the difficult task of capturing a woman who goes from a promising theater performer, to a mother and flawed wife, to a woman who tries, and slowly fails, to maintain her composure as she fades away.

By the end, Our Friend will leave you raw yet hopeful, just as Matt feels when Dane returns to New Orleans without an overwrought goodbye. The film isn’t trying to say anything inspirational about death or even friendship; it’s reminding us that death is an inevitability, and it wears on those around it. Some friends react out of awkwardness; they want to maintain what they perceive to be a respectful distance, or they stay away because they feel uncomfortable around death. Who doesn’t? But it’s friends like Dane who commit themselves to being there. That’s the root of Teague’s story and the essence of this film, and it feels every bit as personal, even if it navigates around the ugliest details along the way. When it’s over, you’re left wondering if you have any friends like Dane, or if you could ever be as selfless.