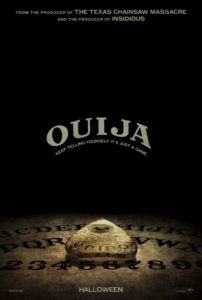 Given the two would-be spooky scenes that take place while a character flosses in front of the bathroom mirror, the producers of Ouija probably wanted some critic to write that it ‘does for flossing what Psycho did for taking a shower, or what Jaws did for swimming.’ However, no one is going to write such a statement (hopefully) except out of jest, because this movie is awful. Not guilty pleasure awful, but the kind of awful that’s just plain awful. It’s a thankless, unredeemable awful. Based on the longstanding Hasbro game, the movie features teens who hope to contact spirits from beyond the grave; all the audience finds is another in a long line of bland body count fare. The humorless, PG-13 rated result drags on for a painfully long 83 minutes and tests an audience’s patience with its tedium, predictability, and generally generic quality.

In a community that seems to consist solely of white, upper-class teens, all virtually unsupervised by their never-present parents, the genial Debbie (Shelley Hennig) finds an old Ouija board and, in short order, ends up dead. Her group of friends refuse to believe Debbie’s apparent suicide and, led by her best friend Laine (Olivia Cooke), seek answers by contacting her with the antique “spirit board”. Joining Laine is a roster of characters all played by actors closer to their thirties than their early twenties. Laine’s boyfriend Trevor (Daren Kagasoff) and his hair look like Patrick Dempsey’s younger brother. Isabelle (Bianca Santos) doesn’t believe in ghosts. Pete (Douglas Smith) was Debbie’s boyfriend. And Laine’s rebellious younger sister Sarah (Ana Coto) joins the fun too.

Debbie’s aged Latina family friend, who has some vague insight about the supernatural, warns them, “Don’t go seeking answers from the dead.” But these stupid, stale-bread characters meet at Debbie’s house for a Ouija séance anyway. They speak to a presence that identifies itself as “D” and communicates by spelling out “Hi Friend”. Must be Debbie, right? In the days to come, each of the group’s various members receives the same message in their everyday lives. Before long, they begin dying and they figure out it’s not Debbie but a malignant spirit bent on evil for evil’s sake. Of course, Debbie’s house has a sordid history of murder and witchcraft; though, one suspects this information was not disclosed by the realtor when her parents purchased the home.

After talking to one of the previous inhabitants (Lin Shaye), who’s elderly and wheelchair-bound and in a mental institution of all places, the non-teens learn what they must do to dispel their curse. It involves going into the dark, spider-web-laden basement and finding the corpse of a little girl. Ghosties come out of the woodwork, sporting those vertically elongated mouths special FX designers are so fond of these days (see Grave Encounters, The Conjuring, Insidious 1 & 2, the Paranormal Activity series, and so on), and the teens explore noises in the pitch black of night armed with failing flashlights. It’s all fairly common stuff you’ve seen before, just reorganized around a new device. But first-time director Stiles White delivers every scene with an unsurprising quality, and his script, co-written by Juliet Snowden (The Possession) doesn’t inject one ounce of lifeblood into the scenario.

More offensive and certainly less entertaining than a best-worst-movie type of thing, Ouija commits the crime of taking itself too seriously while also being an incredible bore. From Anton Sanko’s unremarkable score to the murky lensing by David Emmerichs, the production is undistinguished. White and company offer the audience a flavorless little programmer that results in a terminal case of indifference. But it will no doubt make profits and garner a sequel since it was produced for next to nothing and arrives a mere week before Halloween. Still, there’s nothing worse than a movie that does realize its potential, ironic or otherwise, and resolves to recycle ideas without presenting them in a unique or interesting way. To feel nothing about a movie is probably the worst reaction one can have, and Ouija is memorable only for how unmemorable it is.