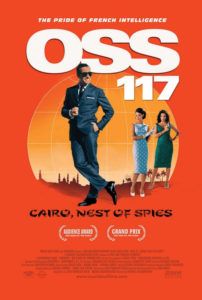 Years before Ian Fleming conceived the womanizing, martini-drinking, international sexcapades of England’s favorite top secret agent James Bond, Frenchman Jean Bruce developed his own debonair superspy, codenamed OSS 117 (meaning Office of Strategic Services). Bruce began his novels in 1949; Fleming didn’t bring Bond to the page until 1953. The first OSS 117-based movie (N’est Pas Mort) hit theaters in 1957; the first Bond movie (Casino Royale) arrived in 1967. Change the ones to zeroes and you have double-0 seven. Coincidence? You be the judge.

OSS 117: Cairo, Nest of Spies is a spoof comedy derived from reoccurring themes in both Bruce and Fleming’s texts. Set in Bruce’s world but in Fleming’s popularized motion picture style, director Michel Hazanavicius’ film is a revival of Bruce’s now forgotten spy yarns, embracing their clichés while exploiting their dated idealisms. Our hero Hubert Bonisseur de La Bath, codenamed OSS 117, is played by comedian Jean Dujardin, a physical comic who in the correct light resembles a young Sean Connery. The setting is the mid-1950s—clear when we see Agent Bonisseur pays his tips with a pocket-size photo of French President René Coty (1954-1959).

Bonisseur is a devoted Frenchman and a ridiculously stupid spy, world unaware. His mission begins when he’s sent to Cairo in search of his missing ex-partner, Jack (Philippe Lefebvre), who we learn from Bonisseur’s dreamy memories is an avid paddle-ball player. Typical sexy female guide Larmina (Berenice Bejo) exposes him to her native Egyptian culture, like her Muslim religion, which Bonisseur waves off saying, “It won’t last.” His first night in Cairo, our suave agent is awakened by a Muezzin echoing the daily prayer. Being a superspy, Bonisseur “takes care” of the racket so the city can sleep peacefully. Perhaps that’s why Larmina arranges for Bonisseur’s cover to be a live chicken merchant, which, he seems to actually enjoy.

Hazanavicius increases the production’s credibility with an impressive 1950s and 1960s mise-en-scéne. During flashbacks, he saturates the film with blue-green colors, giving it that washed-out look. The costumes, hairstyles, and makeup are vintage—but authentically so, not in a faux modern back-to-the-fifties style. The filmmakers’ devotion to recreating the era-specific genre is extended to humorous degrees. Observe an early scene where Larmina drives Bonisseur out to the Suez Canal. As rear projection screen suggests the car’s “movement,” Larmina’s cigarette smoke drifts calmly upward, clearly unaffected. Or when Bonisseur is attacked in his hotel room, the assailant carries an inch-thick blade, visibly made of plastic. Such intentional omissions and oversights keep our attentive eyes busy, while the film’s more boisterous humor engages our basic desires for raw entertainment.

But the bawdy humor never goes over-the-top and never reduces itself to the crude language or pervasive nudity frequented in today’s cinema. The production plays by its era’s rules: during sex scenes, the action occurs offscreen; swearing is mild; and violence is never more than a sock in the jaw. It’s all very innocent in a childlike way, exploring the limits of PG-rated vulgarity. Bonisseur’s fixation with his chickens, for example, provides an amusing ongoing joke wherein his company’s success—the agent dwells over papers, calculating budgets, despite its pointlessness to his mission—seems to preoccupy his mind. And then, when the lights are dark, he switches the lights on and off, wowed by the poultry’s reactions: shrill bocking in light, silence in dark. Later those chickens become nunchuck-like weapons for a hooded assailant.

Forget the whole Austin Powers goofiness that excludes anyone not accustomed to Mike Myers’ brand of humor and his same few accents long-since-established since his SNL years. The French have conceived the ultimate James Bond spoof, in the same kind of doting, lovingly cinematic embrace that Walk Hard parodied Walk the Line and The Doors. OSS 117: Cairo, Nest of Spies was released in 2006 in France, but it’s finally made its way to America and now remains in limited release. Seek this one out for some hearty mainstream entertainment now, since there’s already a sequel in development. This film finds that unique balance where those looking to quench their base desires will be satisfied, while those of us needing some production merits can revel in the homage to vintage spy thrillers.