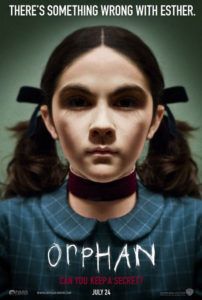 For some moviegoers, Orphan might seem silly at first glance. On the surface, it’s another in the long line of killer kid movies—a genre that includes Children of the Corn (1984) and The Good Son (1993). Many viewers might intend to watch it for a lark, laughing at what’s presumed to be some ridiculous horror nonsense. But this isn’t one of those cheesy B-movies, even though it hails from Dark Castle Entertainment, the production company responsible for the big-on-budget, low-on-brains remakes of House on Haunted Hill (1999) and Thirteen Ghosts (2001). Instead, director Jaume Collet-Serra, who made House of Wax for Dark Castle in 2005, has constructed an intelligent, disturbing thriller that builds tension slowly and meticulously. It involves us on unexpected emotional levels, making us care about the characters instead of just compiling a body count. Therein, it sends us writhing in our seats from the perpetual sense of unease and growing shock. Visually and thematically, the filmmaking aligns with the story, leading to a killer twist that makes Orphan unforgettable. But afterward, I found myself thinking more about the dimensions of the central couple, played by Vera Farmiga and Peter Sarsgaard, than the creepy kid.

Take the first scene, when Kate and John Coleman arrive at the hospital for the arrival of their third child. The images in oversaturated light suggest a nightmare—and sure enough, the baby has tragically died in Kate’s womb. Kate dreams of this; she sees John’s face as the doctor using heavy equipment to remove a bloodied newborn. And, as we will learn later, their mutual resentments over past traumas are buried deep. What’s more, Farmiga’s gut-wrenching scream at this shocker moment anticipates how much she’s putting into the performance. In the meantime, Kate says she wants to put that love for their lost child into somebody else who needs it, so they resolve to adopt. At the orphanage, they find Russian orphan Esther (Isabelle Fuhrman), a well-mannered and intelligent 9-year-old girl with pigtails in bows and a frilly dress. They find her painting by herself, away from the other kids. Articulate and composed, she casually mentions that she’s “different” and how people should “take the bad things in their lives and turn them into something good.”

Before long, Kate and John are signing the paperwork and arriving at home with their adopted daughter. They introduce Esther to their two biological children, the defiant adolescent Daniel (Jimmy Bennett, the young Kirk from Star Trek) and his younger deaf sister Max (Aryana Engineer). Esther has even learned some basic signs on the ride home for Max’s benefit. How charming and considerate. But gradually, everyone—except for John, that is—feels there’s something about Esther that isn’t quite right. Why is she the only child to never paint outside the lines? Why does she never remove the ribbons around her neck and wrists? Why does she only wear dresses that look best suited for a storybook character? At first, Max seems happy to have a sister to play with, whereas Daniel rejects her for taking his parents’ attention away from him. John believes Esther’s eccentricities are those of an understandably complicated youth jarred by a life of being shipped around from Russian orphanages to American ones. But, boy, is he wrong. 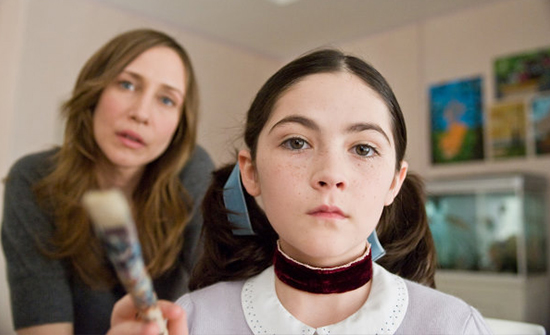 Kate doesn’t trust her, either; in fact, she believes Esther is responsible for several recent accidents: A girl at the playground slips off the slide. A nun (C C H Pounder) from the orphanage with questions about Esther’s origins goes missing. Then the new parents learn Esther’s family burned up in an arson fire. Kate remains the film’s center, looked upon with suspicion because her recovering alcoholism still potentially threatens her family’s stability and because an accident on some ice nearly killed Max some time ago. Both John and her shrink (Margo Martindale) doubt Kate’s suspicions. Meanwhile, Esther observes these dynamics in John and Kate’s relationship, and she creates a wedge between them, prompting terrified silence from Daniel and Max, seeming paranoia from Kate, and frustratingly doubt from John. As the family members get pulled further apart, Esther smiles in secret, manipulating them to frightening extremes. The film builds to a last half that twists your insides.

The script—written by David Leslie Johnson, from a story by Alex Mace—develops three-dimensional characters who feel authentic and draw out our sympathies. But the actors deserve much credit for elevating the material. Without their talent, the story could’ve turned into a series of stereotypes. Consider Farmiga, who’s given strong performances in The Departed (2006) and Nothing But the Truth (2008). She emotes enough in her expressive eyes to earn our compassion, forcing us to care as much about her character’s struggle with alcoholism and dynamic with John as we do her predicament with her psychotic adopted child. Sarsgaard makes his husband role understandably cold and distrustful toward his wife, given her history, though he should really trust her when she says Esther needs help. Really. However, it should be noted that the 12-year-old unknown Fuhrman steals the show by communicating a pitch-perfect Russian accent and by making the freaky twist ending utterly believable. More on that later.

Compare this film to Roman Polanski’s Rosemary’s Baby (1968), not only because they’re both disturbing films about the creepy possibilities of children, not only because the selfish husband doesn’t believe his wife’s claims that something sinister is afoot, but because they both contain equal parts of dramatic resonance and ghastly terror. Orphan isn’t a wholly plot-driven exercise; it allows for scenes that get to the center of Kate and John’s marriage and the fissures therein. Note the scenes where John attempts to prompt lovemaking, only to be shot down. Then, he comes on to Kate in the kitchen one night. With the kids almost to bed, it’s a risky proposition, but she lives in the moment anyway—a decision that leads to Esther spotting then, followed by an awkward conversion where Esther reveals she knows what “fuck” means. Both Rosemary’s Baby and Orphan take their time setting up fleshed-out characters and earn thrills by building on clever little details as the film progresses. Both suddenly become nightmares from which there’s no return. And both have very sudden climaxes. Although Polanski’s film eases away, Orphan makes an abrupt transition to the credits that should’ve been softened with one last scene. 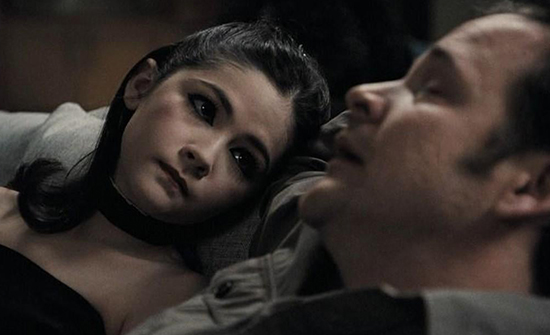 For those who wish to remain unspoiled, skip to the last paragraph. Those who continue reading probably know the secret about Esther. But if you’re lucky, you didn’t know about the twist beforehand—Orphan’s reveal is a shocker. When Esther allows Kate, a former Yale piano teacher, to give her lessons, despite being a talented player, it seems like the innocent deception of a child prodigy. When Esther pummels the nun to death with a hammer and blackmails Max, or she holds a razor to Daniel’s privates to keep him a silent witness, it seems like the work of a disturbed, maniacal child. Eventually, Kate uncovers the truth: Esther is a 33-year-old woman with a glandular disorder that makes her look like a kid, and worse, she’s an escaped mental patient. Knowing this, everything that’s happened before takes on a warped dimension—particularly her relationship with John. Orphan plays a bold, even dangerous game in casting Fuhrman in a manipulative, adult role, especially once the character’s plan of killing off the family and coupling with John reveals itself. But never once does Fuhrman seem like she’s faking it or giving a wooden child performance. Instead, she convinces us that she’s Esther.

Collet-Serra’s visual sensibilities—so impressively handled on House of Wax that one might be tempted to call it a good movie—continue here. The camerawork by Jeff Cutter proves just as patient and intentional as Timothy Alverson’s editing, save for those frenetic scenes where Esther loses her cool in a dizzying outburst of rage, including a memorable freakout in a bathroom stall. Production designer Tom Meyer takes advantage of John’s occupation as an architect, placing the film’s events inside Kate and John’s elaborate house—one of those secluded, immaculate homes that seem to only exist in movies. However, the wintertime setting and almost grayscale color palette are answered by the film’s clever visual and thematic flourish: When illuminated with UV light, Esther’s paintings and bedroom walls reveal hidden images depicting acts of violence against Kate and the children, and passionate lovemaking with John. The bright, luminescent light presents a sharp contrast to the film’s otherwise muted visuals, supplying a compelling metaphor for the hidden personality beneath Esther’s outward appearance.

Orphan plays with an audience’s expectations and avoids cliché setups, and therefore, it concentrates more on creating a sophisticated, layered psychological thriller around your typical bad seed yarn. Of course, you’ve seen kids gone bad before in movies. Hell, Farmiga starred in one of the best examples, the underseen Joshua from 2005. But none will so effectively get under your skin the way this one will. Your stomach will knot up, you will gasp in shock, and perhaps you will even cover your eyes. And then, after it’s finished, it will linger with you for hours, if not days afterward, itching at you and not letting you forget it. But Orphan’s greatest trick is Fuhrman, whose performance turns Esther into an unforgettable movie maniac whose terrorizing of this convincing family haunts us. If only more horror movies in this age of bad remakes and torture porn could be as scary, character-driven, and emotionally satisfying as this one.