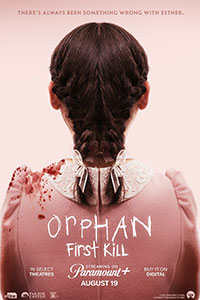 Orphan: First Kill is a prequel to 2009’s Orphan, a superb thriller in which Isabelle Furhman, 12 years old at the time, played a killer child named Esther. Besides its clever secret that Esther is actually a 33-year-old mental patient with a genetic disorder that allows her to pass as a child, the original cares about its characters. Esther infiltrates the central couple—terrifically performed by Vera Farmiga and Peter Sarsgaard—and uses their marriage’s deep-seated issues to divide them. Beyond the novelty of its twist, the actors sell every frustrating manipulation, every emotional betrayal, and eventually, every scare. Unfortunately, First Kill offloads all that character depth and resolves to be a campy B-movie. While its predecessor sold an otherwise preposterous idea with performances and psychological stakes that elevated the material, the prequel reduces Esther to gimmicky schlock, even though First Kill, too, contains a doozy of a twist—discussed in detail below, so consider yourself warned.

Part of Orphan‘s appeal is watching Furhman as a child actor give a performance that convinces us of two things: first, that Esther is a child maniac, and later, that Esther is an adult trapped in a child’s body. Those feats require incredible talent, rare for someone so young. Now in her mid-20s, Furhman remains an excellent performer. But she’s no longer a kid, and the novelty of a marvelous child performance has expired. Instead, the filmmakers resolve to de-age Furhman using in-camera trickery, including platform shoes on Furhman’s costars to make her appear shorter, smaller doubles in master shots, and forced perspective. It’s not entirely convincing or seamless. Furhman’s bone structure has changed since becoming an adult, and she never entirely disappears into the role, despite replicating her younger voice with perfect pitch. Watching the original, the viewer never had to suspend their disbelief, even when Esther wipes away her makeup and reveals the age lines of someone two decades older. The prequel doesn’t achieve the same illusion.

Such a detail might be dismissable if First Kill, originally titled Esther, invested in its characters as much as its plot. But screenwriter David Coggeshall (The Haunting in Connecticut 2: Ghosts of Georgia) and director William Brent Bell (The Boy) seem intent on exploiting the franchise’s pulpier sides, either ignoring or actively changing course from the original’s more dramatic tone. Instead of cleverly manipulating those she encounters, Esther doesn’t maintain her childish disguise for long. The movie opens in Estonia’s Saarne Institute, from which, as viewers of Orphan already know, Esther soon escapes. Going by her original name of Leena Klammer, she makes quick work of some guards and a new art therapist to gain her freedom. But there are already confusing details. For instance, Leena is dubbed the most dangerous patient in the hospital and, to my understanding, has killed before. So why is the prequel called First Kill when her actual first kill occurred before the events in this movie? 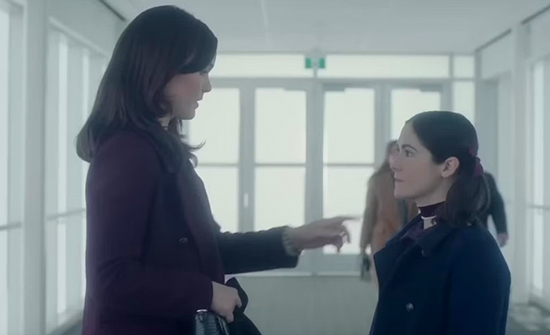 After her escape, Leena convinces the local authorities that she’s Esther Albright, a child who disappeared from her wealthy Connecticut family four years earlier. They reunite her with Esther’s mother, Tricia (Julia Stiles), artist father (Rossif Sutherland), and indifferent teenage sibling Gunnar (Matthew Finlan). They all have questions about what Esther’s been through, and why she now has a Russian accent. From this setup, the viewer might expect the proceedings to unfold similarly to Orphan, where Esther gradually seduces the resident father while sabotaging the mother and competing child. But the filmmakers have something different in store when, mid-film, they reveal that Gunnar murdered the real Esther, and Tricia orchestrated a cover-up. They know Esther is not Esther, and they plan to get rid of her. As it turns out, the only thing worse than a murderous mental patient is a privileged upper-class American family.

It’s a twist you’ll see coming, and it spoils the integrity of Esther as a villain. In this, the writers of First Kill make a common mistake among many horror franchises, which, in their sequels, turn their villains into antiheroes and rob them of their scare potential. When a horror movie maniac becomes popular, studios often respond by giving the audience more of what they want—the baddie. Usually, they achieve this by repurposing what made the villain menacing in the first place, and sometimes, by pitting them against an even more detestable foe. In A Nightmare on Elm Street (1984), Freddy Krueger started as a child killer who haunts the dreams of teenagers; after a few sequels, he became a quip dispenser whose burned face and razor fingers adorned lunch boxes. Hannibal Lecter transformed from a cannibalistic master criminal in The Silence of the Lambs (1991) to a chummy protagonist who outsmarts the FBI and other pursuers in Hannibal (2001). Most recently, the insidious blind man and kidnapper in Don’t Breathe (2016) received a redemption story in the 2021 sequel.

First Kill attempts something similar. And while it’s sort of fun to watch Stiles play against type, she doesn’t have much to do besides torment Esther and supply a hammy villain. Sutherland is sympathetic as an unaware and struggling painter who teaches Esther the UV technique that factors into Orphan. Finlan never escapes his angsty psychopath routine. Fuhrman, too, is limited by the movie’s few uses for Esther. Each character has two dimensions at most, one less than those in the 2009 film. The story doesn’t fare better. Take a subplot about Esther befriending a rat in her new family’s elaborate mansion. Suspecting that Tricia is trying to poison her, she feeds the rodent her bowl of macaroni and cheese. Later, the rat dies after eating nearly the entire bowl, but it’s unclear whether the rat died from the poison or eating its weight in macaroni. Indeed, most of the plot leads from one improbable situation to the next, each sillier than the last, because the screenplay takes no time to make the characters convincing.

Hitting a few hundred theaters and Paramount+ for a simultaneous release, First Kill feels like a cheap knock-off, about a decade too late, and not worthy of a theatrical release. What’s more, the prequel looks downright muddy compared to the visually accomplished original. Cinematographer Karim Hussain, who also shot this year’s dreadful Firestarter, renders every image in a dark, brown soup of colors and almost soft focus that only accentuate the bad CGI in the fiery climax. Most disappointing is how the filmmakers have stripped away the nuance and emotion from the storytelling, leaving us with 99 minutes of genre rubbish instead of the original’s more than 2 hours of dramatic thrills. Even if meant as mindless fun, First Kill proves predictable and tedious. The filmmakers have taken a smart stand-alone movie and given it the dullest possible addition, similar to those empty Friday the 13th or Saw sequels that are less about characters than furthering the franchise.