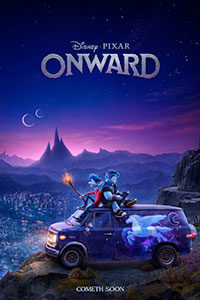 Pixar has a rare knack for setting stories in elaborately conceived yet familiar worlds that fire the imagination, and it has sustained their originality and accessibility for decades. No matter how small or expansive in terms of size, their films take place in worlds that feel larger than life: the bedroom of a young boy in their enduring Toy Story franchise, the ocean’s ecosystems in Finding Nemo (2003) and its sequel, the prehistoric terrain of The Good Dinosaur (2015), and the fraught headspace of a child in Inside Out (2015). The animation studio, serving under the all-encompassing Disney umbrella, continues to turn these spaces upside-down with Onward, set in a fantasy world of elves and trolls. Rather than embrace its enchantments and spells, which require skill and inborn magical abilities to master, the inhabitants of this world have given up any magic or sense of wonder for the ease of technology. Here’s a film where trolls and pointy-eared creatures spend their days scrolling through social media posts and visiting chain restaurants, as opposed to setting out on grand adventures worthy of Tolkienian lore.

Besides the detailed world-building, Onward tears another page from the Pixar playbook in its story of young people processing death, separation, and aspects of life that could be perceived as negative—growing up, feeling down, facing change, and overcoming fears. It’s the stuff that made the opening of Up (2009), a few simple images that gave us an entire lifetime of emotion, such a profound gut-punch, only to be matched by its spirit of adventure. Similarly, their brilliant Coco (2017), set amid the imagery of Mexico’s Land of the Dead, epitomized the studio’s willingness to talk about death. Of course, the studio’s famously collaborative story conferences always result in screenplays that are life-affirming and resoundingly bittersweet, even as they stun with their visual splendor and sheer entertainment value. All of this is true of Onward, which director and co-writer Dan Scanlon based on his real-life experiences with loss. When he was just a year old, Scanlon’s father died, and as a boy growing up, he had no memories of him; even his older brother only had a vague sense of their father. Scanlon, along with fellow writers Jason Headley and Keith Bunin, translates his real-life experiences into a lively and emotionally rich story in the familiar milieu of The Lord of the Rings and Harry Potter.

A prologue explains that a world once teeming with mystical creatures and wondrous sorcery now looks a lot like the Spielbergian suburbs, complete with cul-de-sacs and awkward teenage boys, if inflected with fantasy flourishes here and there. Families have small dragons as pets, their houses look like toadstools, and stray unicorns rummage through garbage cans like scavenger pests. It’s in such a world that we meet Ian Lightfoot (Tom Holland), a shy and lanky elf of blue hair and skin who, upon his sixteenth birthday, begins wondering about his father. Ian’s older brother Barley (Chris Pratt, channeling Jack Black)—who’s obsessed with rock music and the film’s version of Dungeons & Dragons, the “historically accurate” Quests of Yore—has convinced Ian that he must celebrate his birthday with a “solemn quest” as a right of passage. Conveniently enough, their single-mother Laurel (Julia Louis-Dreyfus) has been holding onto a gift from their absent father, a wizard’s staff and magical gemstone. Using these, the boys learn they can bring their father back to life for 24 hours for a proper goodbye. It doesn’t quite work out that way. 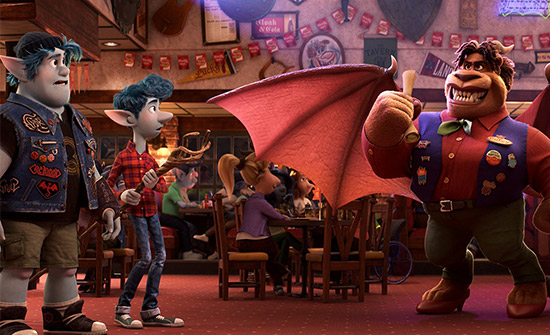 In a curious twist, the otherwise conventional screen story finds the boys accidentally bringing only half of their father back to life—the bottom half, visualized in a pair of lively khakis topped by a glowing blue hole where his torso should be. To materialize the rest of him, the brothers must set out on a journey to find a series of magical MacGuffins (a “phoenix gem,” a legendary sword, and a tank of gas), a familiar type of scenario for anyone versed in fantasy fiction or role-playing games. In the meantime, the boys plop a stuffed hoodie and vest on their father’s legs, which makes for some unstable Weekend at Bernie’s-brand humor, where the bottom half works, but the top portion flails about, yanked along by Ian on a retractable dog leash. It’s an idea that makes for some amusing physical comedy initially, though it’s surprising that the filmmakers resolved to keep the character as legs for as long as they do. Other, more practical matters emerge as well, such as Ian overcoming his fear of driving, or Ian’s eventual realization that his father-figure was the endearing goofball Barley all along. Any viewer even casually versed in Pixar films will anticipate many of these story beats, but that doesn’t make them any less beautifully realized or tempting to the flow of tears.

Onward often juxtaposes images from its clashing of worlds, offering a myriad of amusing and inventive particulars that keep the viewer amply diverted: A gang of tough, pink-skinned feminist fairies ride motorcycles and sparkle with every flap of their wings. Laurel’s boyfriend, a cop-centaur named Colt Bronco (Mel Rodriguez), has stopped using his horse legs in favor of his SUV. The climax’s fire-breathing dragon materializes out of concrete and rubble, its face rendered from a painting of the cartoonish school mascot—a smiling dragon no less. And as the imagery draws the best aspects from the old and new into visual terms, the story reveals a similar appreciation of valuing the past even as characters move forward—or onward, as it were. It’s an unsubtle theme encapsulated by Barley’s clunky rocker van, which he has named Gwenevere, and which must be put in “O” for “Onward” to drive forward. Scanlon seems to tell his audience that picking the best aspects of the past and treasuring them, while never forgetting to keep making progress, remains preferable to living in the past or dwelling on what one may have missed.

Scanlon has been working with Disney and Pixar for over two decades, usually on second-tier material and direct-to-video sequels. His first major project at Pixar was Monsters University (2013), a worthy follow-up, though doubtless, it remains overlooked by anyone assessing the studio’s pantheon of greats. Onward will probably be underestimated too, as it plays like a mid-level entry amid Pixar’s other offerings. Still, there’s plenty to appreciate here, from the fully realized world to the genuinely endearing brotherhood at the center. Scanlon and his writers also get a lot of mileage out of rethinking fantasy characters, such as Corey (Octavia Spencer), a manticore quest-giver who has since been overcome by bland business-speak and turned her mythic home into an Applebee’s look-alike. As ever, Pixar employs ironies and reference material that has a way of playing better with adults. Even though it doesn’t live up to the heights of, say, The Incredibles (2005) or WALL·E (2008), if Onward were released by another studio, it would be hailed as exceptional.