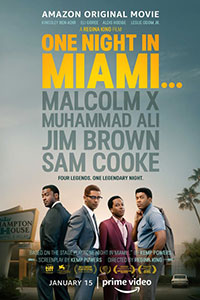 Whenever an actor becomes a director, there’s good reason to question whether they’re a genuine talent behind the camera or just stroking their ego. But for every William Shatner or Eddie Murphy at the helm of a disaster, there’s a Greta Gerwig or Paul Dano to blow away our expectations. Thankfully, Regina King falls into the latter category with One Night in Miami, her feature debut as a director. King has spent the last decade cutting her teeth on the small screen, making the occasional music video alongside episodes of Shameless, Scandal, and other shows—a fertile training ground for her adaptation of Kemp Powers’ 2013 play, which she also executive produced. After an Oscar for Best Supporting Actress in 2018’s If Beale Street Could Talk, she proves that her talent extends well beyond crafting a character of her own; she takes that ability and applies it to her cast, resulting in four finely calibrated performances. Best of all, King could have taken the easy route and created larger-than-live portraits of her film’s subjects, but instead, she delivers a thoughtfully considered drama that never feels like a stage-to-screen adaptation.

Powers, who recently impressed as co-writer and co-director of Soul, based One Night in Miami on an actual event, the details of which remain pure speculation. Fact: On the night of February 25th, 1964, the 22-year-old boxer then called Cassius Clay defeated the heavyweight champion, Sonny Liston. Afterward, rather than celebrate with a party, Clay (Eli Goree) headed to the Hampton House Motel with his friends: his Muslim spiritual mentor Malcolm X (Kingsley Ben-Adir), NFL champ Jim Brown (Aldis Hodge, from The Invisible Man), and singer-songwriter Sam Cooke (Leslie Odom Jr., Tony winner for Hamilton). What exactly the four discussed remains a secret; however, the next morning, Clay announced his transition into the Nation of Islam. Not long afterward, he became Muhammad Ali. Powers fictionalizes everything in-between, drawing from biographical concerns in the lives of these men, each of whom faces a particular tension between their personal and professional selves, their roles as entertainers—as Black “gladiators” for a white audience—or as Black men of considerable influence over how Americans view the Civil Rights Movement.

Freeing himself from the constraints of the stage, Powers’ script does not, as the play does, open immediately after the Liston title bout. Rather, each character receives an establishing scene set far away from Miami, lending some perspective to the world outside the dumpy hotel room where most of the picture unfolds. Unlike Ma Rainey’s Black Bottom, another cinematic stage adaptation, One Night in Miami offers more than a throwaway moment beyond the story’s otherwise isolated setting. These are full-fledged scenes that inform each man’s worldview, such as Clay almost losing to Henry Cooper in London or Cooke performing for a racist white audience at the Copacabana. The most pointed of these establishing scenes belongs to Jim Brown, who visits his former home on St. Simons Island, where he’s reminded that despite every yard he gains as an NFL star, powerful white people in Georgia still view him as someone who isn’t welcome in certain homes. In the most doomed storyline, Malcolm X returns home to his wife, Betty Shabazz (Joaquina Kalukango), and weighs the implications of separating from the Nation of Islam. 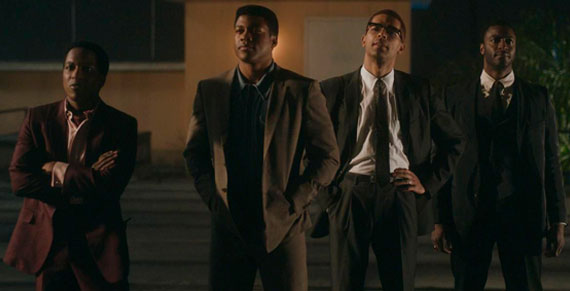 Each character exists in a state of flux. Cooke and Brown feel somewhat removed from the centerpiece of the film, which remains the relationship between Clay and Malcolm X. Although Malcolm arrives in Miami, along with an FBI escort that does little to hide its intimidating surveillance, to guide Clay into the Muslim religion, he also has an agenda, alluded to throughout the film without spelling it out. Clay worries that his newfound celebrity may cause friction with his new championship title—and he doesn’t want to ruin his chances of becoming a star. At the same time, Brown announces he will leave the NFL to work in Hollywood, a move the others interpret as shifting from one form of exploitation to another. Cooke, too, must confront his output of saccharine love songs in contrast to the messages of more outspoken voices like Bob Dylan, whose “Blowin’ in the Wind” captures a passionate argument for civil rights better than anything Cooke had released by that point. Only Malcolm, who’s accompanied by security from his organization (Lance Reddick), wants to spend the evening discussing these issues, whereas the others would be content with getting drunk and laid.

Watching the film, we cannot help but think of the other actors who have played these men. How could Ben-Adir hope to compete with Denzel Washington’s monumental turn in Malcolm X (1992)? Who played Muhammad Ali better, Goree or Will Smith in his Oscar-nominated performance from 2001? What becomes evident almost immediately is that King has cast her film so the actors would disappear into their roles, serving the character, not the performer’s celebrity. Each part is exquisitely acted, but not showy, despite the temptation for larger-than-life portrayals. Ben-Adir and Odom Jr. carry a weight to their performances that signal how, in Malcolm’s case, death will become an inevitability, whereas Cooke must reconsider his desire to perform for a white audience. By contrast, Brown and Clay have carved out a niche for themselves—Brown in a tenuous Hollywood career, Clay in his superstar role as the fast-talking champ. Each of them, save for Malcolm, seems to be compartmentalizing how, as Malcolm notes, “Black people are dying in the street every day.” Each of them seems to be unwilling to truly commit to using their power as a celebrity to push the movement forward.

The film’s ongoing debate about public and private selves, between the face these men put on for a white audience versus the reality of their situation, becomes a central theme and dramatic anchor to One Night in Miami. Kemp’s writing addresses such concerns without becoming soap-boxy or overt, without losing sight of these icons’ emotional toll and humanization. The lively performances, particularly from Ben-Adir and a fantastic Goree, allow the viewer to stop seeing the acting and focus on character, to the extent that the interpersonal relationships and ongoing dialectic become more significant than what their conversations represent. King’s direction is so effective because it’s invisible, noticed in the unflashy yet smartly considered blocking and capable shooting by Tami Reiker, who also delivers two stirring boxing matches. Guiding four excellent performances that compel the viewer to consider history, personal ambitions, biographical details, and social responsibility, King has achieved one of the best directorial debuts in recent memory.