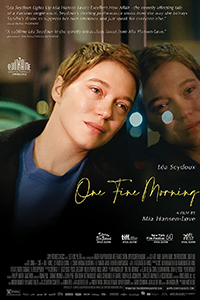 Mia Hansen-Løve’s One Fine Morning (Un beau matin) shares its title with a cyclical poem by Jacques Prévert, where a man finds himself haunted by the feeling that he saw someone, heard someone, or felt someone nearby. It’s about the connections and absences in our lives, and how life becomes a series of elusive pursuits and fleeting moments from one event to the next—a persistent theme in Hansen-Løve’s films. This includes her latest, whose title might suggest a sunny romantic comedy, though, in its nod to Prévert’s poem, it acknowledges the endless flow and complexity of life’s experiences. Cinema usually fails to grasp life’s irregular rhythms and impulses; screen stories often have a structure with a clear beginning and middle, and they end when the credits roll. Yet Hansen-Løve has a unique gift for capturing how people adapt in ways that, upon reflection, might seem tragic, though these maneuvers accurately reflect the unpredictable trajectories of life. In the case of One Fine Morning, she deals with loss and separation on the one hand but new love on the other. Although a seemingly simple story, the film recognizes that the chapters in your life overlap and rarely lead to closure, often with bittersweet results.

The full review is currently posted on Patreon. You can read the full review HERE. Join Deep Focus Review’s Patron community, and you’ll receive exclusive access to this review and many others writings published on Patreon first.