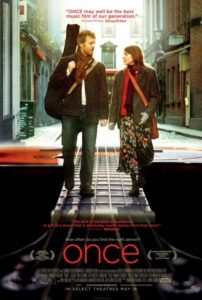 Irish filmmaker John Carney has made the best movie musical in the last thirty years, and he does it without drawing on a single traditional device of the musical genre. He avoids focusing on anything but music, almost as though the plot exists only to reinforce the songs. His two main characters, in fact, don’t even have names. They’re credited only as “Guy” and “Girl.” In a Hollywood musical sense, relying on music alone might seem awkward or forced when a song begins, except Carney establishes his characters so well early on through subtle nuances. Their environments and occupations show us who these people are. Every precious little detail alludes to something greater, so when songs do occur, they aren’t the type where characters sing about washing the dishes or whatever they happen to be doing just then. They’re emotive, poetic ballads that we as the audience have to read into. The songs do not blatantly describe or portray, they simply suggest and infer. We do most of the work.

Shot on digital in a documentary-style, Carney’s camera is a tool of naturalism, capturing pure moments between his two main characters. Its grainy, low-budget image adds to the film’s unpolished appeal. Songs develop without benefit of heavily choreographed dance numbers; instead, we simply see characters sing, watching as the expressions on their faces read like a book. Even the plot sewn to the songs is about the music, as opposed to Hairspray or Chicago where a story is told that just-so-happens to be sung. Like Yankee Doodle Dandy, the film follows performers as they carry out their musical work.

Guy (Glen Hansard) is a busker, or street performer, who strings his passionate songs on a ragged-looking acoustic guitar in the streets of Dublin. Girl (Markéta Irglová) is a Czech immigrant who sells flowers in a busy street. One day Girl notices Guy playing. She stops and drops him ten cents. They get to talking and she discovers this is only Guy’s night job; during the day he fixes vacuum cleaners with his father. And wouldn’t you know it, she’s got a broken vacuum. Girl dabbles on piano occasionally at a local instrument shop. Guy asks her to play something; she selects a delicate piece that Guy is taken with. Indeed, so are we. He asks if she’ll try one of his songs and she agrees. He walks her through the basic melodic structure, and the two play a song that is at once unrefined yet polished, unrehearsed yet almost pitch-perfect. The two seem made for each other.

Each has their own issues with past loves. Guy’s been writing poignant songs about an ex-girlfriend he’s still swooning over. Girl has a husband she left because she felt he was too old and too different from her. Both claim that their songs are odes to past lovers, though we begin to suspect that’s not the case. When singing, their faces emote, and whatever we feel may occur between the two from their musical connection, we know that they make beautiful music together, and certainly could make beautiful music together. One scene shows Guy and Girl standing over an impressive seashore view where Girl confesses she is still married to her husband. Guy asks how he would say “Do you still love him?” in her native Czech tongue. She tells him. Then she says something else in Czech. It sounds similar to “do you love him” but different by a word or two. Did she say “I love you” without him knowing it? I’d like to believe she did.

Carney and his two performers are actual musicians, which is clear upon viewing Once. Hansard and Irglová have voices we believe could be on a professional recording, but are not above singing on the street. They released an album together a few years back. And Carney was in The Frames, Hansard’s former band. Copies are available in stores and online; if for some reason you’re unconvinced by this review, I’m sure you can find a sample from the soundtrack somewhere online. You’ll be taken, I assure you.

What baffles me is the ‘R’ rating stamped unjustly onto this film. Save for the occasional four-letter-word, which kids probably hear at home anyway, the movie is devoid of unsavory content. Narrowing the film’s audience by an overly restrictive rating, the MPAA only proves once again that it has no concept of “appropriate”. If you feel love and the joys of music are unsuitable for children, don’t take them to Once. John Carney has reinvented the musical, making it into something uncharacteristically natural. And yet his invention will likely be a rarity, since I can’t see Hollywood dishing out carbon copies of Once from today’s Dream Factory. It’s one of the most satisfying movies I’ve seen all year, in equal levels of artistry and basic entertainment. And as it’s only in limited release, this is a movie you’ll have to seek out; word of mouth will hopefully spread, getting it into bigger theaters and to more audiences.