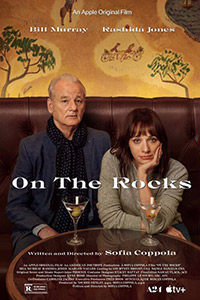 A quiet comedy about domestic anxiety and family hangups, On the Rocks finds Sofia Coppola easing into the particular energies of her stars, the down-to-earth Rashida Jones and deadpan Bill Murray. Jones plays Laura, daughter of Murray’s Felix. Laura suspects her spouse, Dean (Marlon Wayans), of having an affair. The movie unfolds with a pleasant, low-key curiosity, following father-daughter amateur sleuths around New York, investigating Dean’s possible infidelity while also dealing with their own uneasy family history. It feels like Coppola turned the volume down on Woody Allen’s Manhattan Murder Mystery (1993) to a modest hum. With its mainstream title and predictable casting, the result is a lighter bauble than Coppola’s other work. In fact, for much of the 90-minute runtime, her directorial presence seems rather anonymous and unpronounced, as though anyone could have made On the Rocks. But in the sense that Coppola often tells stories about prosperous-yet-disaffected women constrained by the men in their lives, the movie takes a familiar variation on a theme.

In the first scenes, Coppola introduces Laura and Dean at their wedding. They impulsively step away from the festivities to skinny dip in a pool—a moment of passionate spontaneity that disappears from their relationship after a sharp transition to several years later, as predicted by Chris Rock’s stand-up blaring on a television: “If you like fucking, marriage ain’t for you.” Laura and Dean now have two children, a toddler and a grade-schooler, and have settled into a familiar, apparently passionless routine. Laura spends her days catering to the children, trying to start work on a new writing project, though she’s blocked. Dean works on a vague business venture requiring him to travel and dine potential clients. The setup is a far cry from Coppola’s usual characters—at the court of Marie Antoinette, lazing around the Chateau Marmont, or occupying a Southern plantation—though no less privileged. Indeed, it’s tempting to dismiss On the Rocks entirely as “rich people problems,” and another example of Coppola’s siloed perspective from her seat among Hollywood royalty, but the movie has a grounded quality too.

When Laura wonders if Dean is having an affair with his coworker Fiona (Jessica Henwick), Felix, an art dealer and lifelong Cassanova, fuels her suspicions. Coppola plants the seed of doubt in the viewer as well, and Wayans’ careful performance leaves the question of his character’s infidelity uncertain. After all, Laura’s marriage fits like an old pair of sweat pants, the details of which Coppola observes with humor. At a work event, Dean greets Laura with a fist-bump, and her casual mom attire looks far more practical than Fiona’s cosmopolitan cocktail dress. Are these signs of trouble in paradise, or do they reflect Felix’s old-school worldview? Felix speaks like a father (“He should be worshipping the ground you walk on, and if he’s not, you need to know”), and alternatively, like a misogynist in pseudo-anthropological lectures that justify male promiscuity as a primal instinct to “keep the species alive.” No wonder he assumes the worst of Dean. Then again, when Laura finds Fiona’s body oil in Dean’s suitcase, it’s difficult not to question her husband’s loyalty. Maybe it’s just that Felix assumes all men are like him, and Laura assumes all men are like her father.

On the Rocks gives us another unassuming, effortlessly charming Murray performance. Felix propels the story, pushing Laura into an adventure that takes them on late-night stakeouts and an impromptu trip to Mexico. He’s the kind of incorrigible personality who can spot that his server is a ballet dancer, charm the pants off a cop who pulls him over for speeding, and talk around his wanton behavior. He’s also an attentive father, showering Laura with gifts and taking her out for her birthday since Dean misses the occasion for work. Murray is perfect in his carefree way, and watching him hang out with Jones—they have irresistible, easygoing chemistry—can’t help but bring a smile. Even so, Laura seems reluctant but helpless against her father’s soft skills, and their history remains compartmentalized, until it isn’t. Although it might be tempting to compare Felix to Murray’s Bob Harris from his earlier collaboration with Coppola, Lost in Translation (2003), the character has more in common with his role in Jim Jarmusch’s Broken Flowers (2005) as another flawed Don Juan. But Felix doesn’t show signs of existential crisis, aside from a pointed moment when he evades Laura’s question: “Was it worth it?”

Shot by cinematographer Philippe Le Sourd and scored by Phoenix in an unassuming aesthetic, the movie often isolates Laura, framing her as a passive participant in life, whether she’s standing next to her father, her chatty friend (Jenny Slate) at her child’s school, or in a reluctant conversation with Dean. Jones, though affable, recedes into each scene, especially those where Murray’s magnetic personality draws our attention. It’s tempting to see On the Rocks as semi-autobiographical for Coppola, whose famous father doubtless proved unreliable more than once in her life; he certainly continues to loom over her. (“Remember, don’t give your heart to any boys,” Felix tells Laura in the movie’s opening voiceover. “You’re mine until you get married, then you’re still mine.”) But the way she ends the story between Laura and Felix shows an emotional maturity and acceptance that sometimes the people in your life don’t occupy the roles you need them to. In that sense, even though the surface story resolves itself in a bow, there’s a fascinating unresolved tension to the conclusion that lingers well after it’s over.