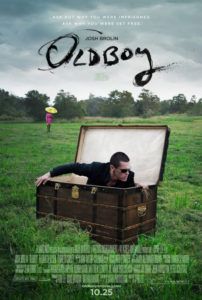 When considering Spike Lee’s remake Oldboy, one must remember that remakes aren’t inherently bad. They usually just turn out that way. After all, Martin Scorsese remade the Hong Kong thriller Infernal Affairs into his Best Picture and Best Director winner The Departed, surpassing the original; he also bested the 1962 Cape Fear with his 1991 version. Park Chan-wook’s original Oldboy was released in 2003, won the Cannes Film Festival’s Grand Prix in 2004, and went on to become a cult sensation in the United States. The South Korean director’s brilliant and disturbing picture is Americanized into “a Spike Lee joint” of lesser consequence, the effort wholly unnecessary. Lee’s not-inconsiderable talent makes a fine attempt to interpret the story with two or three unique touches, but he doesn’t make it vital or offer a fresh take. The result never captures the shocking whimsy of Park’s version, which balanced revenge, ultra-violence, surprising humor, torture, and incest into a deeply affecting and philosophical piece of visceral cinema.

The script for Lee’s version was written by Mark Protosevich (I Am Legend), who based his screenplay on Park’s film and not, as the original, on the Japanese manga Old Boy, by writer Garon Tsuchiya and illustrator Nobuaki Minegishi. Protosevich’s version follows the basic narrative threads of Park’s film. Josh Brolin plays Joe Doucett, a deplorable drunk who wakes up after a disastrous night in 1993 to find he’s been imprisoned in what appears to be a hotel room with no phone. On TV, news broadcasts inform him that his estranged wife has been raped and murdered, leaving his 3-year-old daughter parentless. Joe has been framed for the crime, but why? For 20 years, Joe is locked in his prison; he has no human contact and doesn’t know why he’s been held captive. He stops drinking alcohol, cleans up his mind, and watches Kung Fu movies and exercise programs—all to prepare himself for the day when he can escape and exact revenge on his captors. But before he can escape, he’s set free.

At first, Joe experiences a culture shock when he’s unleashed into a world of iPhones and web searches about which he knows nothing. Fortunately, his bartender friend Chucky (Michael Imperioli) and a Good Samaritan from a local charity clinic, the eventual romantic interest Marie (Elizabeth Olsen), take pity on this Rip Van Winkle and resolve to help him. It’s any wonder why they bother with Joe, since he’s unwaveringly dislikable, hard-faced, and never gives any reason beyond his mission of revenge and redemption to sympathize with him. Though he wants to reconnect with his now 23-year-old daughter—a cello player who, on a TV show called “Mysteries in Crime” has stated she’s willing to forgive her father’s alleged crimes—Joe’s ever-volatile mood doesn’t justify their convenient devotion. Sadly, Brolin’s performance consists of a chronic scowl; he’s downright hateful in the beginning and never shows the layers or tragic vulnerability of Choi Min-sik’s performance in the original.

In her book On Death and Dying, psychiatrist Elisabeth Kübler-Ross famously outlined the five stages of grief: denial, anger, bargaining, depression, and acceptance. She believed everyone should “accept the consequences of every deed, word, and thought throughout our lifetime.” These are the grim words repeated almost verbatim by Adrian Pryce (Sharlto Copley), the fussy British billionaire who’s imprisoned Joe and wants his captive to answer two questions, who kidnapped him and why. Brolin’s character spends far too much time in the anger phase, whereas Choi’s most human moments were in Kübler-Ross’ other stages and his occasional bout of utter madness. Brolin’s Joe seems impelled by cruelty alone, and Lee doesn’t shy away from the bloody stuff to illustrate this (the remake is far more aggressive than the original, which used its violence in a playful, metaphoric way). When Joe confronts the makeshift hotel-prison warden (Samuel L. Jackson, under a mohawk wig) in an unwatchable scene, he proceeds to cut chunks out of his victim’s neck and warns that he’s preparing to pull off his victim’s head with his bare hands.

Lee’s direction has just as few layers as Brolin’s performance, and what layers there are feel incompatible. This being his first Hollywood picture since 2006’s Inside Man, Lee serves as a director-for-hire and resorts to paying homage in ungainly ways, as opposed to making the narrative or even memorable scenes his own. Take the famous fight scene from Park’s film, which occurs in a hallway and pits Choi’s character, armed with just a hammer, against a gang of goons. Lee’s version of this scene is wonderfully executed in an unbroken take that shifts between three floors, but it’s an energetic and lively sequence that feels out of place in an otherwise dour film. Versed in jarring tonal shifts, Lee sometimes makes incongruousness an asset (see Bamboozed), and other times, it’s tragically confused (Miracle at St. Anna). With Oldboy, there’s a flatness to Lee’s approach that does the shocking subject matter a disservice.

Those familiar with the twists and turns in Park’s original will feel nothing toward Lee’s take on the jaw-dropping climax. Even unfamiliar viewers won’t feel the same degree of emotional trauma which Park delivered in 2003. There might be a gasp here or a “yuck” there, and the performers (namely Copley and Olsen) put in their best effort, but Lee’s Oldboy remains so completely unnecessary and impersonal that it’s mildly offensive. Had another filmmaker truly engaged the material to squeeze out every significant, complicated emotion felt or implied by Park’s original, the Americanization could have resulted in a worthwhile translation. Instead, the new Oldboy stands as a Hollywood product designed to cash in on a cult sensation, yet oddly does so by removing the elements which made it so powerful. Though remakes have an unfair reputation for being pointless and never superior to the original, here Spike Lee has done nothing to prove otherwise.