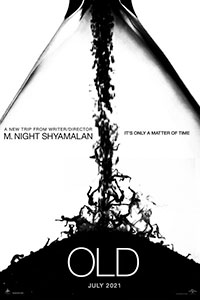 Old is about vacationers on a freaky secluded beach that causes them to age at a rate of one year for every thirty minutes that pass. M. Night Shyamalan’s take on body horror watches his characters go through a lifetime of physical changes on a compressed timeline, dramatizing not only the natural growth and decline of the human body but the uncanny effects of accelerated time as well. Shyamalan based his screenplay on the graphic novel Sandcastle by French author and filmmaker Pierre-Oscar Lévy. But given his mainstream Hollywood sensibilities and PG-13 rating, the writer-director takes a different path than his source. Lévy’s more introspective text mourns the brevity of life and spends more time with the children who suddenly become adolescents with newfound sex drives. Shyamalan prefers the gristlier aspects. In his hands, it’s a 108-minute episode of The Outer Limits, complete with a few gasp-inducing shocks, some neat-if-gross ideas, and a better takeoff than landing.

For a long while, Old doesn’t reveal what’s happening or why exactly, and the movie is best when it’s in discovery mode. Number-cruncher Guy (Gael Garciá Bernal) and museum curator Prisca (Vicky Krieps) take their 11-year-old daughter Maddox (Alexa Swinton) and six-year-old son Trent (Nolan River) to an idyllic resort that Prisca found online. On their second day, a friendly hotel manager suggests they visit a secluded beach that’s also a “natural anomaly.” They arrive with other guests: a narcissistic doctor (Rufus Sewell), his elderly mother (Kathleen Chalfant), his superficial wife (Abbey Lee Kershaw), and their very young daughter Kara; a nurse (Ken Leung) and epileptic therapist (Nikki Amuka-Bird) couple; and a rapper named “Mid-Size Sedan” (Aaron Pierre). Not long after their arrival, the kids start sprouting, and the adults start wrinkling. And when escape proves impossible, there’s a grim sense of panic about the inevitable.

The director is clearly having fun with the concept. Since time moves faster on the beach, he explores the possibilities of fast-healing flesh with a gripping knife attack, and he ponders its downfalls in an impromptu surgery scene. And what happens when someone gets pregnant? What if someone gets blood poisoning? It’s as though Shyamalan listed several Wouldn’t it be cool if-style ideas and injected them into the script. A particularly nasty sequence involves someone with brittle bones shattering their limbs, which almost immediately reset to disturbingly malformed positions. Of course, Old is the sort of movie that leaves you with questions. Shouldn’t Trent, who starts in the body of a six-year-old and ends up much older, have lost his baby teeth? Why did Maddox never experience her first menstruation? Here’s a film that prompts some fun discussion on the way home from the theater about what Shyamalan does and doesn’t do with the concept. 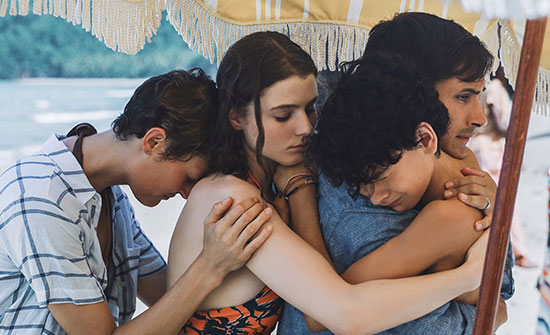 Elsewhere, the director’s penchant for heavy-handed symbolism (see Signs, 2002) emerges in his camera’s way of swinging like a pendulum, counting down the remaining hours of the characters’ lives. With restraint that calls attention to itself, cinematographer Mike Gioulakis’ fluid frame moves away from what another movie might underscore. After Trent and Maddox age dramatically, we see only glimpses of their bodies and their parents reacting to the children’s mature appearance before Shyamalan reveals the older actors (Alex Wolff, Thomasin McKenzie) now playing them. As characters decline, we experience their failing eyesight and hearing first-hand thanks to some fuzzy lenses and sound design. Old has no shortage of inventive solutions; however, they all feel overemphasized in hopes that viewers will recognize their cleverness.

After fourteen movies, Shyamalan’s audience tends to judge his movies by how well they end. It’s the unfortunate expectation set by The Sixth Sense (1999) and The Village (2004) that his output should come with a twist. (For those who wish to enjoy Old with the ending’s secrets intact, return to this review after you’ve watched the movie.) Old doesn’t so much have a twist as a reveal that remarks on the body’s commodification as a testing ground. Our characters have been ensnared in a wildlife lab by scientists testing advanced medicines on a beach where time moves faster than it should. They can see an entire life’s worth of results in just a day, allowing for medical advances in a fraction of the time. The only downfall is the human collateral. It’s an idea whose suspicion of science, especially now with so much anti-vaccine fervor, feels ill-timed. Still, it’s not the pulls-the-rug-from-beneath-your-feet conclusion you might expect.

Unfortunately, Old misses an opportunity to ask more profound questions about how people choose to live their lives. Shyamalan’s script ham-fistedly injects some topic sentences into the mix, but they feel manufactured to create meaning. “You’re always thinking about the future,” Prisca complains. “You’re always thinking about the past,” her husband responds. Later, the aged Kara (Eliza Scanlen) laments how she’ll never experience prom, which may resonate with younger viewers, the responsible ones anyway, who might find it all too painful after losing a year during the pandemic quarantine. Alas, these ideas never amount to much because Shyamalan remains more invested in setting the hook than reeling in his audience. For some, his superb treatment of the moment-by-moment progression might be enough to dismiss its missteps. Others may dwell on the oddly hopeful ending. How strange that Shyamalan ends Old with a tone of optimism instead of a funerary note.