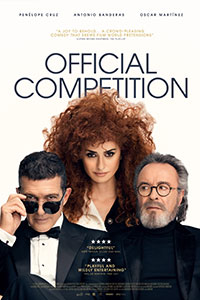 Official Competition looks at the film industry in a similar way to how Ruben Östlund’s The Square (2017) looks at the modern art scene. Both satires center on a few absurd, vainglorious characters in a takedown of their respective systems. Östlund focused on a curator in a Swedish museum to slam upper-class liberals with their faux activism and self-important projects. Official Competition’s co-directors Gastón Duprat and Mariano Cohn, who wrote their screenplay along with Andrés Duprat, portray a film production’s rehearsal process. An eccentric director, Lola (Penélope Cruz), concocts elaborate, possibly meaningless preparatory work on her new film with two famous performers: the superstar Félix (Antonio Banderas) and the method-acting Iván (Oscar Martínez). The Spanish comedy consists of increasingly outlandish sessions—contained vignettes that showcase how each of these three characters vies for artistic superiority and control. If the commentary isn’t as blistering or sweeping as Östlund’s and loses its cohesion by the end, its wild performances and comic situations prove more riotous.

The film opens with a super-rich pharmaceutical executive, Humberto Suárez (José Luis Gómez), who, on his eightieth birthday, wonders, “How do people see me?” Hoping to be remembered for “something that lasts,” he ponders building a bridge in his name. That, or making a movie. Never mind that few movies today penetrate the zeitgeist due to the fractured nature of media consumption and are bound to be forgotten anyway; he’s determined to write the checks in hopes of creating something great. Humberto justifies paying too much for the film rights to a novel entitled Rivalry, about two warring brothers, because the author is a Nobel Prize laureate. He also hires the best talent available. Lola has a Palme d’Or, Félix has a collection of statues, and even Iván, who doesn’t put stock in awards, nonetheless has a few trophies to accompany his prestigious reputation. Knowing nothing about the filmmaking process, and even less about the source material he purchased, Humberto gives Lola and her two leading men free reign to indulge themselves creatively.

What proceeds isn’t a film about an entire shoot. Official Competition doesn’t have the scope of François Truffaut’s Day for Night (1971) or even David Mamet’s State and Main (2000). The audience never even sees the cameras roll. Instead, Lola works with Félix and Iván over nine days of rehearsals. Each of them has a distinct way of approaching their art and the notoriety to reinforce their techniques, so, when forced to collaborate, they clash. The scenes could be a symbolic understanding of a film production—a director-mother contending with her two unruly actor-children and guiding them through their sibling rivalry, while the producer-father remains absent. After all, the themes of competition and rivalry are right there for the taking, part of the title and film-within-the-film’s title. But perhaps the film proper is more surface-level than symbolic, preferring to poke fun at the kooky creative processes and egos that thrive in the industry over making statements about it. Filmmaking requires an openness to collaboration and compromise, but ego and insecurity drive the film world. 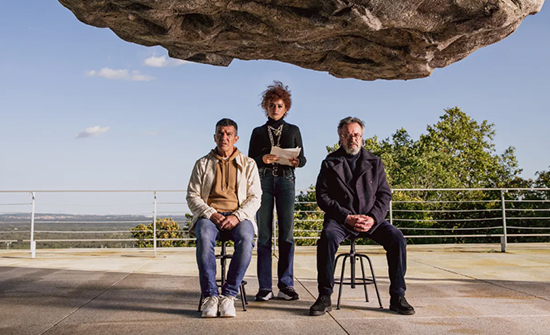 For her part, Lola is a nonconformist who dreams up bizarre scenarios to bring her actors together. Underneath a frizzy mess of curly rust-colored hair, she has an unrelenting temperament and artistic curiosity. Her version of the screenplay looks like a serial killer’s art project, complete with frantic scrawling, pasted objects, and random polaroids. The tensions rise on their initial table read when Lola insists that Iván repeat his simple first line, “Good evening,” again and again until it’s right. Her command, “Once more,” makes Iván balk at her insistence, wanting to get through the text and somewhat offended that anyone would question his acting choices. A similar scene involves Félix acting drunk. Lola wants him to try a 3 on a drunkenness scale from 1 to 10, then a 5, then a 6.5. In both instances, her demands may seem fussy and overly particular at the moment. Then again, she ekes out better performances than what the actors delivered on their first try.

Although part of what Lola attempts to achieve is trust between the two actors, and confidence in her directing, she also plays manipulative games that challenge faith in her tactics. In one of her more amusing stunts, Lola arranges for a five-ton rock to be suspended over the actors’ heads to heighten their performances, but the nerve-racking scene turns out to be an elaborate trick. Less funny is when she wraps the two actors together in plastic and proceeds to destroy their awards, including Goyas and Golden Globes, in a grinder while they watch. The actors have their peculiarities, too, such as their ongoing debate about what results in a better performance, Iván’s emotionally authentic method or Félix’s pretending. Iván’s acerbic pretentions emerge in curmudgeonly dismissals of “the entertainment industry for numbskulls,” whereas, in a scene of conviction-turned-hypocrisy, he secretly plans an Oscar speech where he rejects the award. Alternatively, Félix is proud of his fame and certain of his less labored skill, so much so that he plays a cruel if priceless joke. Like two children in a petty schoolyard game of one-upmanship, both constantly remind each other of their stated opinions about acting and try to literally out-perform one another. Banderas and Martínez both lend their roles a perfect balance between physical comedy and droll observation.

Duprat and Cohn structure Official Competition in isolated scenes, edited by Alberto del Campo into moments that gradually compile into a whole. Cinematographer Arnau Valls Colomer’s gorgeous lensing captures them in the cavernous rooms of Lola’s rehearsal space, a modernist structure of clean lines and symmetrical, tableau-style compositions. This makes any individual scene feel like a satellite, each with its own meaning but strung together by context. Elsewhere, Official Competition features hilariously random asides, such as when Lola attempts to dance the floss in the confines of her bedroom, or when she experiments with her hearing with a vacuum hose or in the presence of several leaf blowers. There’s a hilarious moment when Iván and his wife listen to experimental music and become convinced that their neighbor’s hammering is part of the art. For much of the film, the experience is delightfully repetitive and over-the-top, and when it breaks from that pattern, it becomes a thin assessment of the masturbatory talent making cinema.

Official Competition detours in the final section and peters out when the plot takes over. “Some films,” Lola reflects in the final scene, “may never end.” This one could have kept going in its cycle of sketchlike scenes, and it falters when trying to come up with an ending. Yet, for most of the runtime, the viewer enjoys the weird and idiosyncratic behaviors on display—made all the better because they’re brought to life by three incredible actors. It’s a pleasure to watch Cruz, Banderas, and Martínez act in such oddball roles, both within and outside the text. The filmmakers don’t have much to say about the film industry, the usual behind-the-scenes drama, or the rivalries between artists, beyond poking fun at temperamental egos and offbeat behaviors—not that the directors need to supply a commentary or an insider’s view into their subject. It’s enough that the actors appear to be having fun in their roles, and that Official Competition boasts some striking camerawork and production design. The pleasures may be modest, but they’re wryly satirical and entertaining.