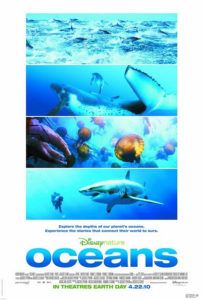 The greatest achievement of Oceans, the sea-themed documentary which debuted in theaters on Earth Day 2010, is that filmmakers Jacques Cluzaud and Jacques Perrin expose the viewer to sights in nature that we’ve never seen, some familiar and some new. The film demonstrates the incredible size of the sea, forcing us to regard the oceans as a world separate from our own. But it also emphasizes how our worlds, the human and the aquatic, remain severely linked. The marine creatures on display here defy imagination; they’re so odd that even the most inventive science-fiction writers haven’t conceived anything like them. And yet, the film makes more common underwater life, such as humpback whales and great white sharks, seem strange and new.

The documentary was distributed by The House of Mouse’s environmentalist appendage Disneynature, which last year, also on Earth Day, released Earth theatrically as a re-edit of the televised BBC/Discovery Channel miniseries Planet Earth. Their first film felt like a Disney safari for children, complete with three family-oriented stories to keep young viewers involved. The presentation of Oceans is not so much an ongoing chronicle of a particular animal group.  Nor does it shy away from the brutal reality of oceanic life, like Earth did. Rather it examines with awe the world-within-a-world that exists under the sea. Indeed, afterward you may feel like there’s another planet below the water’s surface, the population of which feels alien to us surface-dwellers. Still, the filmmakers take great care to make sure viewers understand how the life above and below the surface of the oceans are invariably connected.

Cluzaud and Perrin charmed the entire world in 2001 with Winged Migration, which exhibited an expansive scale and beauty, in turn making us feel pretty small in the grand scheme of the planet. But that film’s scope pales in comparison to the vastness of the waterworld explored by the documentarians. Inspired no doubt by the great accounts of underwater explorer Jacques Cousteau (whose poetic ruminations about ocean wildlife built upon the foundational influence of Jean Painlevé), the filmmakers consider the oceans another universe. Such is the overall theme of the film—astonishment over the blue cosmos that humans so disregard and exploit.

The film begins with children playing on a beach. One of them gazes out at the open waves, looking in equal parts awe and curiosity at the impressive seascape. And as viewers, we too feel like children gaping into the fantastical environment put on view. Shot in more than fifty locations around the globe over a period of four years, the expensive production feels massive. Narrator Pierce Brosnan conducts us through the lovely spectacles, from colorful reef life to the tragic ritual of newborn sea turtles being preyed upon by frigate birds. There’s a fascinating kung-fu battle between a mantis shrimp and a crab, an impressive cuttlefish light show, and some jaw-dropping footage of majestic blue whales. Though there’s a conspicuous lack of deep sea bioluminescent creatures, it’s an immense ocean, so maybe in the sequel. For now, consider that the film covers only a small selection of marine life, and suddenly the oceans seem as extensive as stars in the night’s sky.

Throughout we’re reminded, but not beaten over the head with the results of human influence on the oceans, the damage we’ve caused and the important role we play in their preservation. From a satellite view, we see startling images of freshwater rivers black with pollution draining out into the blue oceans. These scenes never feel preachy and the film never stands up on a soapbox, but Cluzaud and Perrin do remind the viewer that “human indifference is surely the ocean’s greatest threat.” It’s impossible to regard Nature anymore without reflecting on the troubling damage the human race has caused the environment. This documentary doesn’t take an overtly political stand, but it does force the viewer to question what role the human race plays in the global ecosystem, that of a participant, or an apathetic parasite?

Oceans places a valid argument underneath the stirring natural drama at the forefront, but it’s the splendor of the film that will stay with audiences. The filmmakers, who include backers from Participant Media (the production company behind socially-conscious films like Food, Inc. and The Informant!), care about the film’s subject, as evident in every gorgeous frame. This is especially true given the promotional expense Disneynature has invested into this documentary, by donating portions of the film’s opening weekend proceeds to save our coral reefs.

As a feature documentary, Oceans is a simple and captivating treat to behold, particularly on a large screen (Disneynature’s new annual tradition of a nature documentary on Earth Day is a welcome one, especially with African Cats coming this time next year). Audiences will be immersed for nearly two hours of underwater exploration, enough to wish this was only the first entry in an ongoing miniseries about ocean life. Despite leaving the audience craving more, it’s also the sign of a successful documentary if you find yourself looking for more on the subject at hand afterward. If you find yourself in this position, consider adding some Cousteau and Painlevé to your rental queue.