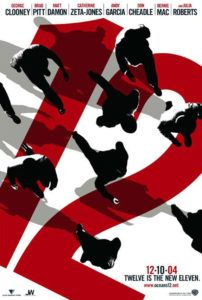 Repetitious sequels are one of Hollywood’s biggest problems. One successful film does not require a carbon copy of the first where lines are repeated, themes reintroduced, or story arcs reciprocated. Though they usually are. Perhaps that’s why I enjoyed Ocean’s Twelve so much; it doesn’t follow the same linear path as the first. It has a globular (pun intended) plot, circling around Benedict, several fancy heists and cons, a competitor thief, and a sexy Europol agent. There may be too much to sift through for some audiences, but it’s all in good fun.

Here, opening scenes show Benedict (Andy Garcia) knocking on the various doors of Ocean’s team, one by one refamiliarizing us with the crew. He advises all he wants his money back—$19 million with interest per member. Except, spending like the rich thieves they are, most of their booty is exhausted. They need $100 million to make up the difference. So off to Amsterdam they go, where their pronounced reputations in the U.S. are washed away, to raise back Terry Benedict’s stolen cash before, for Benedict, revenge becomes a sweeter scent than refund.

Once there, they realize all their leads to possible scores are useless, as a mysterious thief dubbed The Night Fox (Vincent Cassel) undercuts them at every turn. Furthermore, they’re watched like field mice by a predator hawk, Europol Agent Isabel Lahiri (Catherine Zeta-Jones), Rusty’s ex-girlfriend who has a particular dislike for thieves. With their Benedict deadline approaching, suddenly Ocean’s team is asked to indulge The Night Fox in a competition to label which of them is the better thief. If Ocean’s team wins, The Night Fox will pay their debt to Benedict.

Even with all this talk of thievery, numerous former and still active criminals, and so on, Ocean’s Twelve is not a caper movie. There are heist sequences to be sure, but we’re mostly concerned about watching the stellar cast, who’ve all returned, enjoy the spoils Europe has to offer. Soderbergh’s film contains all the glamour of 1950s and 1960s filmic Euro-ventures, such as Alfred Hitchcock’s To Catch a Thief—another film wherein the plot is useless when compared to the riches offered by its stars and setting.

We travel to the Netherlands, Italy, and France, watching as Clooney, Pitt, Damon and the rest indulge in Europe’s picturesque cityscapes. There’s a reason these stars were chosen initially: their prestige and good looks are enough to carry such a fun movie. Europe simply accentuates their already marked Hollywood razzle-dazzle. Given the wavering plot, it only helps that in-jokes continue among the stars. We’re preoccupied with the good time had by the cast, as opposed to the plot, which, in a way, is problematic. Hopefully the onslaught of eye-candy distracts you from the goofy plot as it did me.

And now to address the issue of realism: If you’re disappointed by Ocean’s Twelve’s lack of it, why the hell did you like Ocean’s Eleven? Critics have attacked the plot, some noting the lack of realism for the source of their disappointment in this sequel. Strange, considering the elaborate, unbelievable nature of the first (if anyone “believes” the absurdly complicated safe cracking scheme, shame on you). This time, we’re asked to swallow a house being raised at its foundation, hologram technology, and countless other illogicalities—the best of which is The Night Fox’s rhythmic dance through a moving laser sensor field to a moody beat by French rap group La Caution.

We’re bombarded with coolness once again, not only by the cast and the film’s nonchalant mind-set, but by Soderbergh’s expert direction. Allowed to unwind a little, he still maintains his artistry, bringing a well-constructed simplicity to every scene. In another director’s hands, this movie could have easily failed; yet Soderbergh is as big a star now as his cast. It shows onscreen.

As a reply to detractors fussing that Ocean’s Twelve doesn’t have the same magic Ocean’s Eleven did, I say you’re right. It has a wholly different type of magic, which is commendable. Too often with sequels do we see replicas of the first, where a foundation exists, and then is painted over to give the illusion of superficial differences. But that’s all they are: superficial. Ocean’s Twelve deals with heist movie motifs, yet the plot resolves to simply embrace the characters and the actors behind them, not some twisting and turning scheme. Charming performers are, after all, what made the first movie such a treat.