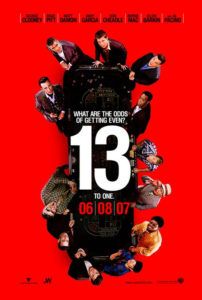 We were already impressed when Soderbergh assembled his cast for Ocean’s Eleven. We were charmed by their charming charmingness, and rightfully so—look at them. They’re all so damned beautiful. Soderbergh has now added a dash of Al Pacino and Ellen Barkin to sweeten the deal, making this film a big, fat celebrity pie. There are so many stars in this movie I was looking for constellations. Only when I thought I saw the Big Dipper did I realize I was being absurd. All the cast is back for Ocean’s Thirteen, except Julia Roberts and Catherine Zeta-Jones. Their characters’ absences are explained when Clooney and Pitt’s characters say, “it’s not their fight.” Yet an ongoing stream of dialogue pokes fun at how fussy they’ve become as wife or girlfriend. Such lines seem adlibbed, as if Clooney and Pitt wanted to poke innocent fun at Roberts and Zeta-Jones about not returning for what would have likely been only a few scenes.

You see, Las Vegas mogul Willie Bank (Pacino) double-crossed Ocean’s financier Reuben Tishkoff (Elliot Gould), bringing Reuben close to death with a heart attack. Opening a garish hotel-casino on the Strip called The Bank and directing it exclusively towards high rollers, Bank doesn’t care who he walks over, just as long as this hotel-casino earns the prestigious Five-Diamond Award. He’s won it several times before, each time earning a $50 million dollar diamond necklace as his prize.

The Bank opens soft, as opposed to grand. A hotel reviewer for the Five-Diamond Award (played by David Paymer) will be lodging there throughout the trial-run days of the soft open; several “whales” are expected to show, gambling their millions on blackjack and craps. Ocean and his crew intend to employ guerilla tactics, sabotaging the games, the hotel reviewer, and Banks’ hotel-casino via oddball disguise and a complicated ruse—all for dear old Reuben. Only their task is near impossible due to a never-before-used artificial-intelligence-based security system that can sense dishonesty by monitoring a player or dealer’s vitals. They go on anyway for Reuben, while the audience laughs off Ocean’s claims that the mission is unworkable.

We know better than that. The Ocean’s movies are all for setting up impossible situations and surprising us with whatever slippery way the crew avoids them. Realism is a forgotten factor when Ocean shows up in Las Vegas unnoticed by authorities. Forget that Bank should know all the faces from the Benedict job; forget that getting one of the drills that made the Chunnel between England and France seems about as easy as running to the grocery store for some eggs. To paraphrase a line from my Ocean’s Twelve review: If you’re disappointed by the lack of realism in Ocean’s Thirteen, why the hell did you like the previous two?

For the most part, we’re walked through this shakedown process, shown how slots are manipulated, blackjack players are fed cards, and how dice are controlled. (There’s a hilarious subplot with brothers Virgil and Turk (Casey Affleck and Scott Caan) leading a revolution at a Mexican dice factory.) Just like the first film, however, though we’re shown the entire process, we don’t know the complete plan. Ocean is so slick, even the viewers can’t see what he’s holding up his sleeves. It reminded me of Melville’s French classic Bob le flambeur, which was clearly the inspiration for the first, as there’s an elaborate plan to take down a casino, leading to innovation (or luck) getting them through the evening.

Al Pacino takes over the villain role while Terry Benedict becomes Ocean’s new financier. Pacino barely taps into those acting skills here; he doesn’t need to pull a Ricky Roma, just be a cruel version of himself and he’s appropriately menacing. Garcia remains ever the gangsterish Benedict, but only in the shadows. (However, he eventually shines in an ongoing Oprah gag.) I admit I was disappointed by the abbreviated Ellen Barkin role; she’s just there more as ornamentation to Pacino, running his errands and what-not. Seems like a waste for an actress with such obvious-yet-forgotten (by Hollywood anyway) talent. By the end, she has one notable scene where she’s entranced by Damon’s Linus; unfortunately, it’s not enough to make up for an otherwise wasted screen presence.

All the actors, we realize over three films, are playing versions of themselves. With in-jokes bouncing off Pitt about having another kid (Seriously, what are he an Angelina Jolie up to now? Five? Ten?) and the aforementioned Oprah cracks, their obvious delight and comfort with each other makes the film, once again, a joy for the viewer. We may not burst into a hearty laugh every few minutes, but we’re always smiling and chuckling because the cast is so likeable.

Soderbergh has met expectations by bringing class to the blockbuster, making it seem somehow diminutive and character-driven despite the high production value of this studio picture. He makes the color saturation (this time red tones) seem effortless, yet the look of Ocean’s Thirteen was clearly labored over. The film isn’t about intricate capers or brilliantly complex heists; this series was never about that. Such plot devices were only the MacGuffin to place us near Clooney, Pitt, Damon, Garcia, and the others—this is a star picture with enough self-respect and class to seem modest. Soderbergh’s status as a filmmaker set the tone back in 2001; now he closes out his trio of light entertainment with a worthy finale. Ocean’s Thirteen is a welcome addition and satisfying close to this undeniably enjoyable series.