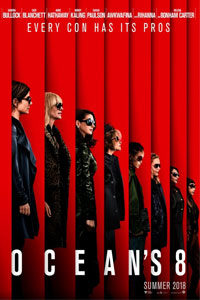 Each of the three earlier Ocean’s movies has essential components that make them work. They have a roster of Hollywood’s coolest performers at their prime (George Clooney, Brad Pitt, Matt Damon, Julia Roberts, Catherine Zeta-Jones, etc.). Their slick plotting combines a heist with a series of elaborate con games that keep the audience guessing. The con involves a personal element for someone, such as Clooney’s Danny Ocean using the heist to prove his love to Roberts’ Tess in Ocean’s Eleven (2001), which ensures our emotional investment. The intricate schemes in each entry remain a secret to the viewer until their stylish unveiling at the climax, adding to our engagement. The heist is also threatened by the presence of a domineering antagonist, creating a sense of danger and suspense. Finally, director Steven Soderbergh shot and edited the material in a mode both classical and stylishly modern, giving each movie an air of confidence that made them relaxed, enjoyable, yet also aesthetically accomplished fun.

Ocean’s 8 comes more than ten years after the last entry in Soderbergh’s trilogy, boasting an all-female roster of headlining stars. Sandra Bullock leads an impressive, diverse cast that includes Cate Blanchett, Mindy Kaling, Sarah Paulson, Rihanna, and Helena Bonham Carter, among many others. And while a women-led spinoff of the franchise remains a promising idea, if not a necessary one for this cultural moment, the new movie’s director and co-writer, Gary Ross (Seabiscuit, The Hunger Games), fails to adopt each of the above-listed components. Rather than innovate and improve upon the material, Ross and co-writer Olivia Milch take a less-is-more approach to the franchise’s formula, which leaves the caper feeling incomplete and less involving than its predecessors. It’s also worth questioning why, in the age of remaking films with a predominantly female cast, the production doesn’t also offer a woman the directing job.

Bullock plays Debbie Ocean, sister to Danny (he has apparently died in a detail that remains oddly elusive, and the viewer cannot help but think Danny is still alive and might show up at some point, but he never does). Much like the first shot of Ocean’s Eleven, the story opens with Debbie convincing a parole board to release her from prison. It doesn’t take long for her to begin making plans to carry out an intricate super-heist with her longtime partner Lou (Blanchett). Because they require several professional thieves, there’s a pleasant getting-the-team-together section early on, followed by the planning and execution of the central crime: Robbing celebrity Daphne Kluger (Anne Hathaway) of a $150 million diamond necklace at the fashion-centric Met Gala in New York City. At the same time, Debbie hopes to get vengeance on her ex-boyfriend, a shady art dealer (Richard Armitage) whose betrayal got her imprisoned.

The cast inhabits playful, mostly one-note roles. Bullock is the calm and clever leader. Blanchett is the team’s roguish go-getter (tell her what to go get). The others are more diversionary. They need Irish designer Rose Weil to design a dress for their mark, and Bonham Carter plays the role with comic nervous energy. Kaling is a jewelry maker experienced in forging expensive personal ornamentation. Sarah Paulson plays a domesticated suburban mother who moonlights as a crook. Awkwafina is a smack-talking pickpocket. And fitting oddly into the computer hacker role, Rihanna. (If you’re counting, you might begin to wonder when number eight comes along, making for a predictable twist.) After they complete the heist, James Corden shows up as a goofy insurance investigator, representing the only threat to Debbie’s team, and he’s about as intimidating as a Teddy Bear. Herein lies the central problem with Ocean’s 8—there’s no villain to threaten the livelihood of the crew, no ruthless baddie determined to catch and punish our heroes through unofficial channels. Ocean’s Eleven had Andy Garcia, Al Pacino served that purpose in Ocean’s Thirteen (2007), while a similar film like The Sting (1973) featured Robert Shaw as a mark capable of murder. Aside from hoping that Debbie and the rest get their payday, the stakes are low.

The other significant component missing from Ocean’s 8 is Soderbergh, who brought a dash of rhythmic editing, winking zooms, and sharply color-timed visuals to the proceedings. Ross and cinematographer Eigil Bryld try to approximate Soderbergh’s moves, his use of vintage 1960s transitions for example, but their attempts in this Zirconia-of-a-movie lack much of his distinct sparkle. (Soderbergh proved last year with Logan Lucky that he’s mastered this heist movie blueprint.) It’s unfortunate that Warner Bros. couldn’t convince Soderbergh to return to the helm, as most of the elements are in place to make an all-female version something to celebrate. Had Ocean’s 8 been at least as visually distinct as Soderbergh undoubtedly would have made it, the movie might be more than another of Hollywood’s forgettable reboot-sequel things. From his low-tension plot to the underwhelming formal presentation, Ross has given audiences an impassive, if mildly pleasant viewing experience thanks mainly to the cast.