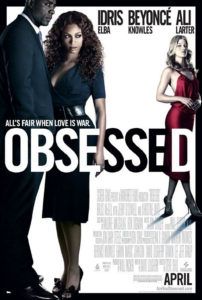 Whenever a movie husband cheats on his movie wife and then finds himself stalked by his adulterous movie partner, he becomes the story’s victim. He always has to protect his poor wife—who already has enough on her plate with mulling over the end of her marriage—from the now-psychotic homewrecker. This is the formula established by Fatal Attraction, which Hollywood follows time and time again. Obsessed diverts by presentng a husband who does not cheat, nor does the wife à la Unfaithful, but rather the story falls on a happy couple disrupted by an infatuated third party.

That the conflict is so cut-and-dry presents a problem, because there’s no dynamic or challenge for the audience. We know who is good. We know who is evil. There’s no moral dilemma or question of integrity with the protagonists, but we watch anyway as the predictable events unfold. Derek (Idris Elba) and Sharon (Beyoncé Knowles) are happily married. Derek has a new promotion. Sharon has a new baby and house to manage, and she dreams of going back to school. Trouble rears her head in the form of an enticing office temp, Lisa (Ali Larter), whose flirtations with Derek quickly go from awkward to out of control. Derek, surprisingly, does not succumb. He tells Lisa nothing can happen, that he’s married, but doesn’t confess what’s been happening to Sharon. Then, of course, Lisa goes really crazy really fast. She stalks Derek, putting him in a guilty-looking position with his job and wife. But eventually, Lisa’s delusional behavior is exposed, and Sharon is forced to defend her home by dropping the bitch’s “skinny ass” to her death. End of story.

Formerly titled Oh No She Didn’t according to imdb.com, the movie uses mild racial stereotypes to differentiate itself from the usual sexy thriller yarn. The implications are unspoken within the movie, but the themes linger in the subtext. Derek and Sharon are an African American family intruded upon by a white woman; even the movie poster wants you to acknowledge this fact with its black and white lettering, as if race somehow matters in this context. But race doesn’t alter the nature of these cliché characters. The husband is a powerless victim; the temp is a psycho. The victimized wife kills the psycho and empowers herself in the process.

Any sense of danger is almost nonexistent, because we’re already sure of how the movie will inevitably play out. The actors do little to misdirect our anticipation, though each gives a believable performance. Elba has towering presence as a male lead and evokes the necessary everyman quality required to generate sympathy. Beyoncé makes a fine strong-willed wife, but her casting also removes any fear that Derek might cheat on her character, because after all, what husband would cheat with Beyoncé waiting at home? And though Larter is no Glenn Close, the glint of madness in her eyes is effective.

Refreshingly rated PG-13, the movie presents no steamy sex scenes to speak of, which are usually standard and the thing to talk about from this brand of thriller. It’s the first feature by Steve Shill, whose experience is almost exclusively directing various episodes from top-notch cable programming like Deadwood and Rome and Dexter—the perfect breeding ground for quality directing. Handled rather plainly, however, the story is straightforward and well-told, if only mildly engaging. Serviceable for a matinee on a dreary day, you could do worse.