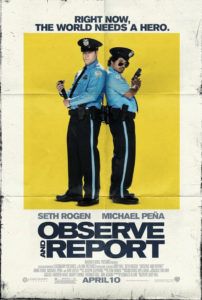 Ronnie Barnhardt takes pride in his work. He’s a mall cop. By most standards that means he’s a loser, but Ronnie has it even worse: he suffers from delusions of grandeur, keeps his bipolar depression in check with heavy narcotics, and enjoys shooting cardboard-human targets at the firing range. Lovely combo. When a flasher, the naked under the trench coat kind, disturbs his mall and his would-be sweetheart, suddenly it all comes together—Ronnie’s mission in life, the thing from which all his good luck with flow, will be catching this flasher. Of course, it doesn’t quite work out so smoothly.

Observe and Report stars Seth Rogen as Ronnie, in another one of those roles where the actor’s good-natured chuckle earns his otherwise despicable character points with the audience. The film follows Ronnie’s slow decline into madness and heroism, in that order, with Rogen keeping the character sympathetic throughout utter stupidity, mental divergence, underage beatings, and what is arguably date rape. Of all the comedies he’s made, this one seems to offer the only real Rogen performance, wherein he’s not merely playing a thinly veiled version of himself.

Opposite Rogen is Ray Liotta, who plays Detective Harrison, the investigator in charge of capturing the mall’s flasher through legitimate police work. Ronnie jealously despises Harrison for investigating his case in his mall, whereas Ronnie’s incompetence sends the detective into a rage. When Ronnie opts to apply for police officer training, Harrison takes him on a ride-along and leaves him in gangland, assuming Ronnie’s misplaced confidence will disappear when hoodlums deliver an inevitable thrashing. But to his surprise, Ronnie unleashes a cheer-worthy baton-wielded pounding on some drug dealers. From then on, Ronnie is convinced of his own awesomeness, and since life is going so well, he stops taking his meds. Bad idea.

And then there’s Anna Faris, who always manages to be the stupidest character onscreen, playing Brandi, the focus of Ronnie’s love (meaning loins), though she sleeps with him only after uncountable daiquiris and four shots of tequila. She’s an empty, loathsome damsel shaken after being flashed, and Ronnie vows to protect her. But, on the other end of the field, there’s the obligatory ‘good girl’ at the coffee shop who Ronnie never notices, because she’s too obviously the right choice. This is the temporarily wheelchair-bound Nell (Collette Wolfe), a born-again Christian teased by her pathetic boss (Patton Oswald) for having a broken leg.

The film’s tone is somewhere between Napoleon Dynamite and Taxi Driver, in an unexpected and clever way. Ronnie monologues about his godlike presence over his mall, leading to a violent climax which rivals that of Travis Bickle. Meanwhile, other characters are eccentric for the sake of unconventionality; except now that formula is very much conventional. Consider those like Ronnie’s fellow mall cops Dennis (Michael Peña), whose sole defining characteristic is a lisp, and the gun-crazy Asian twins (John and Matt Yuen). Or Ronnie’s alcoholic mother (Celia Weston), who exists in the story to propel the occasional drunk joke. These are throwaway characters present simply to fill space with transparently deliberate offbeatness.

About two-thirds of Observe and Report is easily forgotten, bogged down by unnecessary filler, making the almost 90-minute running time feel much, much longer. This abyss of non-laughter is periodically broken by spurts of the film’s bravado fight scenes, as well as its unabashed displays of male genitalia, if that’s your thing. Jody Hill wrote and directed this dark comedy, permeating the same unusual pitch that carried his only other directorial credit, The Foot Fist Way, into minor cult status (look for that film’s star, Danny McBride, in a brief cameo as a crack-dealing gangster). There’s no doubt that audiences will be quoting the film’s more nonsensical lines and laughing-off the many uncomfortable scenes purveyed. Indeed, most audiences will feel uncertain about Ronnie for the majority of the picture. But Hill ends the film in such a way that we’re cheering for the character’s closing triumph, even if him getting there was at times tedious.