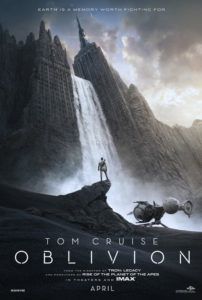 For Oblivion, the second feature by Joseph Kosinski, the director uses the same two-parts-style-and-one-part-substance recipe as in his previous feature, TRON: Legacy, but this time the concoction goes down easier. Based on Kosinski’s own unpublished graphic novel and written by screenwriters Karl Gajdusek and Michael Arndt, this gorgeous production seems more concerned with producing remarkable images than telling a remarkable story. But what images. Kosinski combines top-notch special FX with the same primordial, Icelandic scenery that Ridley Scott used for his comparable visualist’s rendering of Prometheus, and the result is a familiar post-apocalyptic alien invasion tale ripped from the pages of countless (and better) science-fiction stories. Fortunately, the original material has no expectations to meet, unlike Scott’s did, leaving the serviceable—but nothing more than that—story to maintain our interest as the director’s awe-inspiring visuals, exciting action sequences, and the ever-watchable star power of Tom Cruise keep the audience rapt.

Cruise stars as Jack Harper, a white-clad technician on Earth some 64 years after humanity’s devastating battle with invaders from outer space, who first attacked by detonating our Moon. The Earth was rocked with resultant natural disasters and soon irradiated by human nukes in retaliation, the landscape left almost unlivable. Survivors decided to migrate to Saturn’s habitable moon, Titan, and now leftover is a massive upside-down pyramid-shaped station called the Tet, which orbits the planet. Below on the surface, enormous engines collect water for Titan, and Harper repairs downed equipment and his team’s security drones on missions monitored by the other sole member of his so-called “mop-up crew”, his controller Victoria (Andrea Riseborough), with whom he shares a bed. Their orders come from a Tet “mission control” agent (Melissa Leo) who asks daily, “Are you an effective team?”—leaving us to ponder what happens when the answer is no. That moment comes in due time when Jack finds himself asking questions about his five-year mission, such as why a mandatory “memory wipe” was required. Or, why the few surviving alien Scavengers (called Scavs) are trying to trap him? The audience asks their own questions too, like why are Victoria’s pupils always dilated?

And then there are Jack’s visions—those vague impressions he gets at night of a woman he has perhaps never seen. What do they mean, and how do they relate to the now-dead prewar world to which Jack feels so close to yet could have never known?  His digging puts a strain on his and Victoria’s strict mission orders to keep within their designated borders and protect the vital water collectors, all targets for the lingering Scavs inside the perimeter, where beyond is a deadly “Radiation Zone.” Victoria’s conformity and insistent lack of curiosity remain unbending, while Jack’s romanticism keeps him going. And when a prewar shuttle containing five cryogenically frozen humans crash lands and is attacked by drones, Jack must also ask why drones would attack humans and why the sole survivor, Julia (Olga Kurylenko), looks exactly like the woman from his dreams. Her presence in the Jack-Victoria relationship becomes the final straw for Victoria, whose paranoia and jealousy reach their limit. Even more questions arise when he’s captured by an underground human presence dressed like the Sand People in Star Wars, led by Beech (Morgan Freeman). All the while, no one’s quick to fully illuminate Jack on what’s going on, such as when Beech simply tells Jack to check in the Radiation Zone for the truth.

Great effort is made to make Oblivion a mind-blowing experience on par with The Matrix. But with so many questions needing answers, some answers we guess on our own and others we do not. Some are satisfying developments; others, not so much. The twists and reveals along the way are aplenty, perhaps one too many, and only slightly do they distract us from Kosinski’s true achievement in the film—his visual precision. With production designer Darren Gilford and cinematographer Claudio Miranda (Oscar-winner for Life of Pi), Kosinski’s film looks detailed and immaculate, every shot rendered with almost computerized perfection from one to the next—an intentional choice, no doubt.

Costume designer Marlene Stewart dons the characters in symbolic (and therein deceptive) color assignments. Certainly, if Jack’s white leather flight suit is the orderly uniform of a hero, and the black Darth Vader-esque masks of the Scavs are meant to denote their presumed evil, then Victoria’s alternating gray-white wardrobe suggests her ambivalence toward the truth behind their mission. Foremost in the viewer’s eye are the designs for the gadgets, ships, colossal machines, and spacecraft on display, all conceived with geometric and futuristic applications of clean lines and elegant if emblematic shapes. Jack’s spaceship looks suspiciously like a sperm and the Tet a uterus, and so we anticipate their eventual if obvious union in the finale. Kosinski’s use of the expansive Icelandic locales provides a stark contrast to the cold machinery, and his frame often takes a panoramic view to stress the vastness of Nature and the fallen structures (mostly from New York City; the Empire State Building and Brooklyn Bridge have considerable “roles”) littering the surroundings, versus Jack’s comparably tiny flying sperm contraption and compact motorbike.

Oblivion’s characters do little more than service the puzzle-based plot, leaving the sometimes predictable dialogue to the actors to enhance. Fortunately, Cruise’s intensity dial is turned up, as usual, while Kurylenko, Leo, and Freeman provide a solid supporting cast. British actress Riseborough, who can be seen in everything from Welcome to the Punch and Disconnect as of late, brings an air of desperation needed for her role in what must be named as the film’s only standout performance. Nikolaj Coster-Waldau (Mama) and Zoe Bell (Death Proof) also have small supporting roles, although their presence feels underdeveloped or perhaps edited down in post-production. But it’s Kosinski’s visual character, the crispness of his production, and the energy of his laser-blasting action sequences that prove more diverting, enough to make Oblivion solid entertainment for sci-fi aficionados, even if Kosinski’s ambitious ideas and grandeur-laden tone feel underwhelming. Kosinski, whose upcoming projects are also in the sci-fi genre, seems one or two films away from making something truly unforgettable—a genre film that balances heady ideas, impressive visuals, and a sharp script (recent examples of this: Inception, Looper, District 9, Moon, and J.J. Abrams’ Star Trek) is nearly in Kosinski’s grasp, but not yet. Nevertheless, what he achieves here is an improvement over TRON: Legacy by being an always entertaining escape. In terms of revelatory narrative however, the viewer feels mildly unsatisfied; but it’s a minor complaint about a film meant to drop jaws and inspire awe over its visual scope, which it does—especially on an IMAX screen.