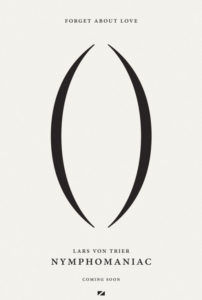 Danish provocateur Lars von Trier follows Antichrist (2009) and Melancholia (2011), the first two parts of his “depression trilogy”, with a third picture designed to shock and dispirit his audience. Nymphomaniac opened to Danish audiences in a five-and-a-half-hour marathon, which has been trimmed for its U.S. release into a four-hour, two-part showcase edited down by producer Louise Vesth and unapproved of by the director. Whether or not U.S. audiences will ever see the full film theatrically is unlikely but remains to be seen (surely von Trier’s uncut, director-approved version will become available on home video). At any rate, the resulting two-hour halves, separated into Vol. 1 and Vol. 2, detail the sexual history of its female protagonist, who suffers from acute hypersexuality. In effect, von Trier takes a dark, uncomfortable, and pointedly unsexy journey into the lows of her sexuality, and the result contains everything an audience expects from a von Trier film by way of strong performances, confronting subject matter, and uneven results.

While speaking to the press at the 2011 Cannes Film Festival (but before he was banned for saying “I’m a Nazi” in jest), von Trier announced plans to make a four-hour epic of sex and, catching them off guard, publicly volunteered his Melancholia stars Charlotte Gainsbourg and Kirsten Dunst for the job. Dunst didn’t go along with her director’s ploy, while Gainsbourg agreed and became the star of both Nymphomaniac Vol. 1 and Vol. 2. Ever since this announcement, the marketing department for the U.S. distributors at Magnolia have made a great effort to inject this unrated, sexually explicit motion picture into public awareness. Some of their efforts are less pronounced, such as the title appearing as Nymph( )maniac, where the “( )” represents a labia. Posters and ads feature von Trier’s impressive all-star cast against a white background, nude, from the shoulders up, and in the midst of achieving orgasm. After seeing the film, the viewer wonders why certain cast members appeared this way, given that their characters never have sex in either volume. But selling sex has been a centuries-old strategy since fine art patrons first commissioned nudes for their private collections, so why break precedent?

Such an audience is found in Seligman (Stellan Skarsgård), an older man who, at the beginning of Nymphomaniac Vol. 1, finds a woman battered and unconscious in an alley. This is Joe (Gainsbourg). After she refuses his offer to call an ambulance, Seligman invites her back to his apartment to recuperate. He engages in conversation, and she offers to recount her life story as a nymphomaniac, warning, “It will be long and moral.” But Seligman is game. Sipping tea, she begins with the eye-opening line, “I discovered my cunt at age 2,” and from here on out doesn’t romanticize her story. Every vagina is a “cunt” and every penis is a “cock”, while Joe’s relationship with her “cold bitch” mother (Connie Nielsen) is counteracted by her surprisingly healthy relationship with a loving father (Christian Slater). She’s a woman who judges herself in harsh terms, calling it “shameful” when she “lubricates” over the death of her father. Her story is told episodically in flashback, structured by von Trier’s oft-used chapters and titles, and intercut by scenes of Joe and Seligman talking in his apartment.

In the flashback scenes, the adolescent Joe is played by Stacy Martin, an inexperienced model-turned-actress whose inability to emote during her many sex scenes leaves the young character seemingly vacant. (That the more potent actress Gainsbourg wasn’t tasked with playing the younger version of her character is the film’s biggest misstep.) After an unceremonious loss of her virginity to her lifelong fixture Jerome (Shia LaBeouf), she forms an underground club of independent women who “combat the love-obsessed society” through meaningless acts of sex, picking up random men on trains and such. Before long, she’s the club’s only member and juggles several men throughout each day. In what’s arguably the film’s best scene, Mrs. H (Uma Thurman), the wife of one of her conquests, shows up at Joe’s apartment for a confrontation of extreme sarcasm and sensationalism, insisting her children sit on “the whoring bed” where their father has been spending his time (this may be Thurman’s finest few minutes onscreen in a decade). Elsewhere, scenes with Joe’s father, an intensely expressive Slater, coincide with her further decline and, ultimately, the loss of her ability to achieve orgasm altogether.

The scenes between Gainsbourg and Skarsgård in the apartment are excellent, and feature fine performances in an anecdotal, almost chamber drama style, as if Nymphomaniac was von Trier’s take on Ingmar Bergman’s Scenes from a Marriage, except, of course, not. We learn Seligman takes an interest because he’s lived an “asexual” life as a virgin (“There’s nothing sexual about me,” he confesses), and so he approaches Joe’s sordid tale from a truly objective viewpoint, judging her not on the performance of certain sex acts with “thousands” of men, but rather accepting her psychological state. Throughout, he interrupts her story to find a fascinating correlation between her sex life and the art of fly fishing (by way of Isaak Walton’s The Compleat Angler). To counteract Joe’s claims that “my actions exemplify that I’m a terrible human being,” Seligman observes and identifies why the Gainsbourg character is tragic and following her nature, and how her story relates to various cultural references, most prominently Christian symbolism. His remarks on her story give Joe perspective on her own life, but they also seem as if von Trier has written a film critic into his narrative to explain the higher purpose of everything in the film—a pretentious move by the director designed to convince viewers why his film is compelling.

Adorned with orchestral pieces from Bach and Fibonacci, the director’s treatment of Nymphomaniac Vol. 1 might be called elegant if von Trier’s cinematographer Manuel Alberto Claro wasn’t so often drawn to filling the screen with a focus on genitalia (Claro’s lensing is pristine otherwise). In most cases, the onscreen private parts are played by adult film stars, although LaBeouf’s erect member makes an appearance. Such shots test the audience, forcing us to see beyond the sordid nature of Joe’s existence to find the human drama underneath. But at the same time, von Trier is clearly enjoying his personal mission to see what he can get away with. He’s made a compelling first half with Vol. 1, the structure outlining a mystery of how Joe wound up bruised and beaten in an alley. And while the answer to that question isn’t revealed until Vol 2., we’re interested enough to keep watching, even though von Tier’s firebrand technique is transparent as can be.