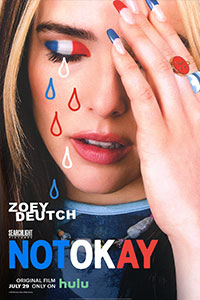 Not Okay opens with a sardonic content warning: “This film contains flashing lights, themes of trauma, and an unlikable female protagonist. Viewer discretion advised.” Writer-director Quinn Shephard sets her sights on the vast and hollow space that is social media, using her character Danni Sanders, played by Zoey Deutch, to expose the inauthentic hellscape of artificial personalities on social platforms. In the barrage of chatter and reaction videos about Danni’s behavior in the film, one commentator calls her worse than Hitler, and another gives out her home address and invites any serial killer to pay her a visit. These extreme and mean-spirited reactions, typical of online hyperbole, exaggerate Danni’s crimes depicted in the film to absurd levels. Granted, her behavior is detestable, but she’s also worth trying to understand. Shephard’s treatment reveals a complex character whose loneliness and desire to be loved mutate into appalling behavior. Indeed, the real antagonist of Not Okay is social media—how its influencers project false fronts, and how easily some people get caught in its trap of performative exhibition for likes and follows.

So what does Danni do that makes her so unlikable and apparently unforgivable? A low-level photo editor at a media outlet called “Depravity,” Danni yearns for acceptance, acknowledgment, and love. “Be careful what you fucking wish for,” she says to the camera, filling us with dread over what comes next. To begin with, she has no real friends, just a fair-weather mother (Embeth Davidtz) from whom she seeks approval and a loving but ineffectual father (Brennan Brown). Most of her coworkers find her inauthentic, and that’s true enough. Danni’s problem is that she tries too hard, replicating the way she thinks the in-crowd behaves in a way that comes off disingenuous and desperate, so people avoid her. For instance, she wants attention so badly that she claims to feel robbed of trauma because her family was out of town during 9/11. The tone-deafness of such a statement cannot be overstated.

After getting high from an unexpected encounter with her pot-smoking crush—Colin (Dylan O’Brien), a vapid influencer—Danni gets the harebrained idea to edit some photos and post them to Instagram, making it look like she took a lavish weekend holiday to a writer’s retreat in Paris. Media outlets and influencers regularly airbrush and replace backgrounds, so it’s hardly unprecedented behavior. But when she wakes up the next morning, Danni discovers that a terrorist bombed several landmarks in Paris. Because of her deceptive posts, her followers now believe she witnessed that trauma. And though she initially considers coming clean, a follow from Colin prompts her to perpetuate the lie and reap the benefits: Danni’s boss gives her a promotion and elevates her to a writer, her mother shows affection, Colin sees her sexually, and overall, she feels known—at least, in the sense that she’s trending. 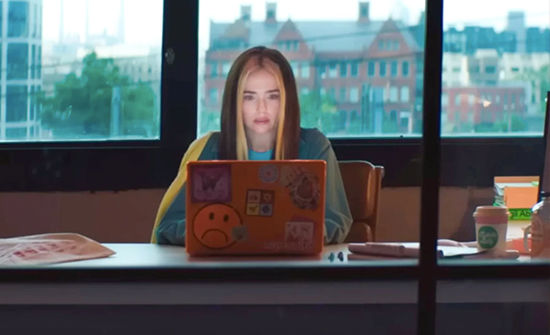 Deutch is perfectly cast as Danni, having played this kind of borderline personality before in Buffaloed (2019), a Goodfellas-esque take on the debt collection industry. The 27-year-old commits to a character who is constantly performing, and who might be intolerable save for some brief glimpses of her humanity. Shephard’s script implies almost sociopathic tendencies in the character, who remarks about feeling “numb” or seeing the world in grayscale. But if the hesitation and self-doubt Deutch gives the character is any indication, Danni is far from dead inside, just woefully misguided. Fortunately, the proceedings unfold in a playful structure of colorful chapters with names such as “The Lie” and “Oh Fuck” and “I Don’t Get a Redemption Arc.” Try as Shephard might to make Danni a monster, Deutch and the film’s energy earn the character our empathy by the finale, even if she doesn’t quite redeem herself.

Not Okay has the quality of watching a car wreck in slow motion. At the outset, Shephard tells us that Danni will be exposed and reviled, so we watch her story with a sunken stomach. Some will find that experience unpleasant, but it’s also a sign that Shephard has done a terrific job of making her “unlikable protagonist” just likable enough. The proceedings become effectively unbearable after Danni befriends Rowan (Mia Isaac, excellent), a school shooting survivor who has channeled her genuine trauma into becoming an inspirational voice of change. Rowan is also shaky and sensitive, making her susceptible to Danni’s worst behavior and potential decency. After all, the two meet when Danni attends a trauma support group, planning to mine other people’s stories for her own writing. Some part of Danni admires and envies Rowan, yet she cannot help but co-opt her newfound friend’s statement—“I am not okay”—and turn it into a hashtag. The friendship between these two is touching, thanks in part to Isaac’s passionate yet vulnerable performance, making the fallout even worse.

Shephard’s sophomore feature (following her 2017 debut Blame), Not Okay finds imaginative ways of exploring Danni’s conscience. Although the film doesn’t offer much detail about the Paris bombings, a news broadcast cites the primary suspect as a hooded figure. And so, Danni dreams of Paris in a series of intentionally bad Photoshopped clichés, where she’s haunted by a phantom of the suspect, stalking her like Jason Voorhees (complete with an aural nod to “ch ch ch, ah ah ah”). Even when she’s awake, the imposing character appears in advertisements and amid crowds, evidently representing repressed guilt that will catch up with her. If Danni were nothing more than a monster, she wouldn’t see this figure at all. Shephard may resist allowing Danni to redeem herself, but there’s enough here to prevent her from becoming a soulless monster like, say, Rosamund Pike’s remorseless, opportunistic character from I Care a Lot (2020).

Instead, Danni becomes relatable because she’s understandable. Anyone who has spent any time online knows how appealing and addictive it can be, even if those feelings prove virtual and often empty. Danni yearns for real connections, yet she lives in a world where fame and attention online are often mistranslated as personal validation of the most shallow kind. At times, Not Okay suggests Danni is beyond redemption for choosing virality over genuine behaviors and relationships. Certainly, the character makes horrible choices, but Deutch’s performance and Shephard’s script instill our empathy. Although it’s not as challenging about its subject as the opening’s mock warning suggests, the film’s condemning portrait of social media and influencer culture appears to come from Shephard’s deep resentment over their superficiality and insincerity. That sentiment is felt throughout thanks to the film’s dark humor, sharp perspective, and two memorable performances from Deutch and Isaac.