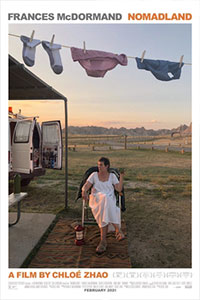 A festival favorite and critical darling, Chloé Zhao’s Nomadland is a film of divisions in form and content. Formally, it consists of observational documentary footage contained in a loose affiliation of fictional scenes, and the two modes often compete with one another. The documentary-style footage romanticizes the modern pioneering spirit, portraying a group of real-life “rubber tramps” who celebrate the freedoms of their lifestyle in the tradition of American frontierism. And yet, Zhao’s character study tells another story of one woman’s experiences living in a van, traveling around the country to wherever seasonal work is needed. Nomadland frames her as a protagonist who’s running away instead of setting out to discover something about the world. Instead of the two forms synthesizing into a uniform structure, the film’s intended message seems to be at odds with its drama. What is presented as a fulfilling alternative lifestyle embraced by people living on the fringes of society becomes a portrait of a broken person using the road to escape her past and shield herself from emotional ties.

As the opening titles inform, the impetus of Nomadland begins with the 2011 closing of U.S. Gypsum’s sheetrock facility in Empire, Nevada. Like a failed boom town during the gold rush, when the factory closed, the town dried up too. The film’s central character, Fern (Frances McDormand), remained behind with her husband, the late Bo. After he died, Fern wanted to remain in Empire, but the town’s zip code was dissolved—and with it, any hope of staying there. Fern resolves to learn the ways of nomadic living out of her van. She begins by working at a nearby Amazon shipping facility as part of its CamperForce program that supports the migratory worker community. When the season is up, she takes to the road, alone. How alone? Early in the film, she has the chance to adopt a dog left behind at the RV park. Rather than take it with her, she leaves the animal tied up in the winter cold. (Admittedly, I found it difficult to empathize with a person who abandons a dog.)

Zhao based her screenplay on Jessica Bruder’s 2017 non-fiction book, Nomadland: Surviving America in the Twenty-First Century, which considers a subsection of people who, after the 2008 recession, opted for a vagabond lifestyle, supported by the occasional bout of seasonal work. It’s a passion project for McDormand, who optioned the book for film and worked closely with Zhao to craft the screen story. Shot over four months and using mostly nonprofessional actors—real nomads found during the filmmaking process—to flesh out the screen story, Nomadland follows McDormand’s cagey interactions with the people she meets along the way, most of them standing in as versions of themselves. Take Linda May, a kindly older woman who instructs Fern to attend a class with Bob Wells, an actual instructor of the nomadic lifestyle. Another woman, credited as Swankie, offers words of wisdom about how the things she’s seen on the open road have filled her life. Scenes with these real people feel like Errol Morris’ interviews from Vernon, Florida (1981). 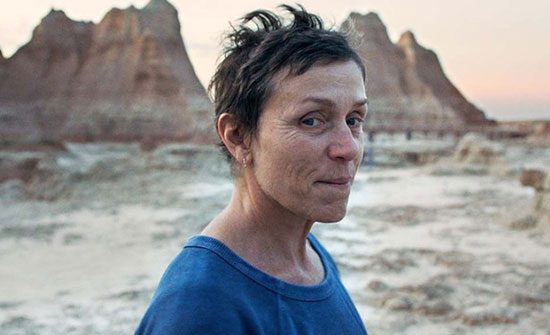 Most of these scenes are authentic and true, making their intrepid journeys on the open road without attachments seem like a worthy endeavor for “freedom, beauty, and connection to the earth.” But the function of these supporting characters is to offer commentary on Fern’s progress in her journey, providing insight in support of her life choices or none-too-subtle allusions to how the viewer should feel about Fern’s wandering. A fellow Amazon employee shares her tattoo of a Morrissey lyric, “Home, is it just a word? Or is it something you carry within you?” In a later scene, Fern’s sister Dolly (Melissa Smith) defends her lifestyle as “part of American tradition.” Zhao wants the viewer to see these nomads as unconventional yet glorious, rooted in a classical Human versus Nature conflict. When Fern isn’t working at Amazon, Wall Drug, or managing an RV camp, she’s contending with flat tires and bitter cold. It’s not quite the Oregon Trail, but it’s not devoid of danger either.

However, the story mixes the message, revealing how Fern uses the road as a method of running away from her pain. She remains in grief over Bo and reticent to commit anyone, whether it be her sister, who offers Fern a place to stay, or her frequent encounters with Dave (David Strathairn), who gives her a chance to start afresh. But Fern is a tough nut to crack; she isn’t interested in roots anymore. She’s consumed by grief and memories. Playing some version of herself (her CamperForce reservation is listed under “McD”), McDormand is wonderful and disappears into the role. Yet, her character’s fictional backstory keeps us at a remove, no doubt by design. Full of polite smiles and internalized emotion, she prefers the ironic choice of escaping society by working seasonal shifts at Amazon. Dolly describes Fern as “braver and more honest” than the average person, but Fern seems unable to recognize that she’s broken by loss and unwilling to heal herself, which makes her life on the road more of a sustained self-denial that she never overcomes. As a result, she doesn’t grow much as a character. Her major revelation is deciding she doesn’t want to die—in an overwrought cliffside scene set to Ludovico Einaudi’s keyed-up score. In the end, her treatment of Dave, an achingly good-natured character, feels almost cruel in a scene all but mirroring her response to the aforementioned dog.

Zhao, who reportedly received feedback from Terrence Malick on her initial cut, employs no end of golden hour imagery captured by Joshua James Richards’ beautiful cinematography. A scene shot in South Dakota’s Badlands looks dreamy and other-worldly, recalling a similar sequence in Malick’s 1973 debut. Nomadland even manages to make an RV camp look stunning. But serving as editor, Zhao becomes overly reliant on these shots and how they revel in Nature’s awesomeness. When in doubt, she cuts to a sunrise or sunset, and it becomes a repetitive device to signal Fern’s desire to keep moving down the road. There’s no denying the sheer splendor of the visuals here, but it’s as though Zhao inserts a gorgeous image to fill the space where emotions should go. Malick always finds ways to balance beauty and internal sadness, whereas Zhao and Fern never filled me with that same kind of balance. Fern remains stricken with solitude, self-medicating with Vitamin D through long, ponderous looks at the Sun. A postscript seems to encourage her choice.

After directing three acclaimed independents, including Songs My Brothers Taught Me (2015) and The Rider (2017), Zhao now belongs to a contingent of young filmmakers (Colin Trevorrow, Ryan Coogler, Taika Waititi, et al.) who have set aside their indie roots for a chance to direct a big-budget Hollywood tentpole. Zhao will bring Marvel’s Eternals to the screen later this year, and it remains to be seen whether her searching, quiet style will have a place in the blockbuster aesthetic of the MCU. Nomadland is impressive visual filmmaking that fills long, dialogue-less passages with incredible imagery—not to mention nuanced and inward performances by McDormand and Strathairn, two performers whose screen presence alone imbues the film with weight. And while other critics have described the film as a character study about transient life, I found the material to be sharply divided between documentary footage of nomads and a fictional account of a grief-stricken widow. The two never came together in a satisfying way since the film’s optimism about the open road was directly countered by the protagonist’s continued grief and emotional isolation. Zhao presents a film that celebrates how these marginalized people forge ahead on the open road; I saw a film about a character who uses that lifestyle to remain suspended in a state of heartache, moving ahead physically while remaining emotionally halted.