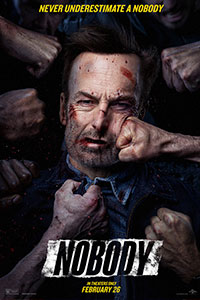 Nobody features a blend of action hero tropes. Some action heroes are the unstoppable type; usually, an elite soldier or mysterious hitman who trained with the best, has a mythical status, and keeps coming until the job’s done or because this time it’s personal. Think Arnold Schwarzenegger in Predator (1987), Keanu Reeves in John Wick (2014), or Charlize Theron in Atomic Blonde (2017)—heroes who dodge bullets by the thousands, rack up a body count in the dozens, and come away mostly unscathed. Alternatively, there’s the everyman typified by Bruce Willis in Die Hard (1988) or Harrison Ford in Raiders of the Lost Ark (1980). They’re in the wrong place at the wrong time, often in over their head, and usually trying to reclaim their masculinity—and in the end, they look bruised, banged up, and generally put through the meat grinder. Bob Odenkirk’s character in Nobody has elements of both the unstoppable and the emasculated everyman. The dynamic becomes a showcase for the Breaking Bad and Better Call Saul star, who has transformed from a comedian into an action hero in the last thirty years.

Odenkirk plays Hutch, a suburbanite whose soul has been thoroughly crushed by his humdrum routine. The snappy opening montage fragments Hutch’s life into repetitious, monotonous images—every day, the same morning coffee, the same commute, the same spreadsheets at his in-laws’ company, the same bed divider that perpetuates his sexless marriage to Rebecca (the refreshingly age-appropriate Connie Nielson). Then something breaks in Hutch’s routine. Two hapless intruders break into his home at night. His teenage son Brady (Gage Munroe) tackles one of them, but something prevents Hutch from braining the other with a golf club. And it’s just another reason for Hutch’s wife and son, and even the police who arrive at the scene, to pity him. Fortunately, his daughter is too young to recognize that her father is a disappointment. Not even Hutch’s military record inspires confidence; he was an auditor, not a “real soldier,” Rebecca explains to Brady.

The incident awakens something inside of Hutch and, for a short time, Nobody seems like it might play out similarly to Death Wish (1974), in which criminals messed with the wrong Average Joe, turning Dad into Rambo. Hutch visits his father (Christopher Lloyd), a retired FBI agent, takes his old badge, and sets out to find his daughter’s kitty-cat bracelet, which he thinks was stolen by the thieves. But then a crucial moment comes when it’s revealed that Hutch isn’t an everyman; rather, he’s an ex-killing machine who has tried to retire into a quiet life. What begins as a simple catharsis of beating up some nogoodniks on a city bus (set to the song “I’ve Gotta Be Me,” putting a fine point on the reclaimed masculine pride theme) escalates into a war with the Russian mob, headed by the merciless, karaoke-singing Yulan (Alexey Serebryakov). Backed by an endless supply of goons, Yulan sends his small army to Hutch’s home, starting a war that reaches a bloody, Home Alone-style climax in an industrial factory.

No wonder Derek Kolstad, architect of the John Wick franchise, wrote the screenplay. Hutch operates with the skill of Wick and, like Reeves’ character, is goaded into a face-off against a whole cadre of anonymous Russians. Except, where Wick distributes headshots with almost mechanical precision, Hutch has the physical vulnerability of Die Hard’s bare-footed John McClane, making the character feel more human. Odenkirk takes some painful-looking beatings (not to mention the occasional knife and bullet) in the movie’s energetic combat, choreographed to visceral perfection and captured with frenzied clarity by director Ilya Naishuller—particularly in the deliriously violent bus fight. The gunplay, too, resists the martial arts ballet of the John Wick movies and instead recalls something brutalist by Paul Verhoeven, where every punch and bullet looks like it hurts. Naishuller also made the disappointing Hardcore Henry (2016), a relentless shoot-em-up that nonetheless signaled his talent for orchestrating chaotic action and making it seem scrappy yet coherent.

The director’s knack for bravado action shines in part because Kolstad’s script makes us care about Hutch, but we only care because he is perfectly cast. Place another actor in the role—anyone from Liam Neeson to today’s inexpressive Bruce Willis—and suddenly Hutch doesn’t seem real or sympathetic. He is, after all, a rather vicious action junkie on a rampage, even though he performs a life-saving tracheotomy after breaking one thug’s windpipe. Odenkirk’s comic sensibilities lend his character appealing deadpan humor that turns otherwise macho lines (“Give me the fucking kitty-cat bracelet!” or “I’m gonna fuck you up!”) into ironic moments of Hutch’s aggressive humanity clawing its way to the surface. Alternatively, in a hilarious and aching pattern, Hutch monologues to the hired thugs, whom he’s just beaten to within an inch of their lives, and confesses his motivations for retiring as an auditor—named as such because he’s “the last guy anyone wants to see at their door.” But before he can finish his story, the thugs die, leaving his backstory incomplete and his existential crisis humorously unresolved. It’s a macabre joke for a darkly funny movie, yet it speaks to Hutch’s essential humanness and makes 92 minutes of extreme violence not without motivations rooted in its character.