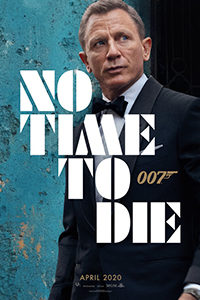 No Time to Die, the latest and last appearance of Daniel Craig as James Bond, is a lot of movie. It’s so much movie that one hardly knows where to begin. So let’s start with the runtime, which carries on for 165 minutes. Long movies don’t deter me, assuming the time is well spent, but this one felt overstuffed. Director Cary Joji Fukanaga, the first American director to helm an entry in the franchise’s 60-year history, gives the audience plenty to contemplate, and not all of it feels essential or necessary. Fukanaga and his posse of screenwriters—including Neal Purvis, Robert Wade, and Phoebe Waller-Bridge—concoct a script chock full of elaborate plotting, drearily murky characters, and weighty themes. These writers have much to do, crafting the final Craig entry. Their screenplay must weave together the narrative threads from the last four movies, starting with Casino Royale (2006). They must consider the series’ clandestine evil organizations and strained relationships, both personal and professional. At the same time, the audience expects rousing action sequences, death puns, and daring spycraft. Plus, unique to No Time to Die is a sense of closure and finality to the Craig run, ensuring that its star never has to return to the franchise he love-hates. As I mentioned, it’s a lot.

Devoted fans of the franchise will eat up this hardy helping of cinematic comfort food with a delirious smile, content that the filmmakers have planned a glorious final chapter for their hero. After nearly two years of delays due to the pandemic, the fact that we’re seeing the movie at all seems like something that might’ve never happened. But here we are, and boy howdy, is it a lot. It’s not merely the latest spy-actioner in the series; it’s a sprawling and contemplative movie about the baggage we carry. Early in No Time to Die, Bond and his new lover from Spectre (2015), Madeline Swann (Léa Seydoux), vacation in the Mediterranean. She wants him to say goodbye to his past, namely Vesper, the femme fatale who broke his heart in Casino Royale, and only then will Madeline share her past. This is a movie obsessed with the past. Its characters have been scarred and remain unable to move beyond their histories. Eventually, Bond comes to terms with Vesper and her betrayal, but in doing so, he finds reason to suspect that Madeline works for the super-secret villain club, Spectre. Since he can no longer trust her, Bond leaves Madeline and retires to a beach in Jamaica.

Five years pass, meaning the characters have stewed in their unresolved conflicts for half a decade. But their issues with the past go further back as well. In a pre-credits scene, a preadolescent Madeline finds her childhood home in Norway attacked by a masked man, Lyutsifer Safin (Rami Malek). To exact revenge for his family’s murder, Lyutsifer wants to kill Mr. White, who is Madeline’s father and the baddie from earlier movies, but he’ll take White’s wife and child instead. After killing the mother, Lyutsifer shows mercy on Madeline and saves her. He uses this life debt later in the movie when he needs Madeline to carry out an assassination—an ultimatum he delivers in Malek’s droning and daresay Jared Leto-esque mannerisms. “He’s weird,” remarks one of Madeline’s coworkers rudely, though she’s not wrong. Lyutsifer, whose name my spell checker wants to auto-correct to Lucifer, is an absurd villain with a shortsighted end-the-world scheme that feels concocted by screenwriters and not by ideology or emotion. He plans to sell engineerable nanobots to the highest bidder, giving the buyer the power to select their target according to a DNA profile. They can be used to kill one person in a crowded room, or they can be used to wipe out an entire race. 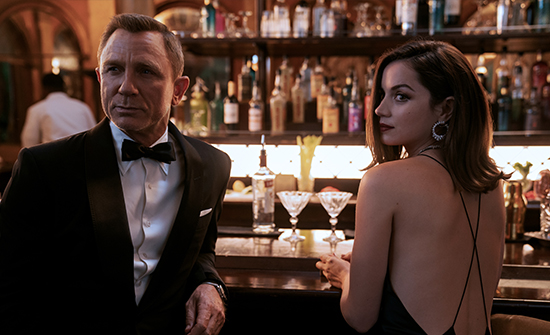 Stakes aside, No Time to Die forces its characters to make life-and-death decisions based on the past’s magnetic pull. Everyone has regrets and scars, some quite literal in Lyutsifer’s case (his face consists of milky flesh, occasionally covered by a cracked doll mask). Everyone’s plagued by their mistakes and need for redemption or revenge. You can feel this oppressive weight in nearly every scene. But there are two exceptions. The first comes in an effervescent sequence that takes Bond to Cuba and pairs him with Paloma (Ana de Armas), a sprightly young agent whose all-too-brief scenes might be the only time this movie evokes a smile or has fun. The other is Nomi (Lashana Lynch), the new 007 with something to prove. She’s around for much longer and supplies a constant reminder that Bond’s time has passed. Refreshingly, No Time to Die doesn’t call out how the new generation of superagents finally includes non-white men and women, and it avoids overemphasizing its inclusiveness. But unfortunately, the script gives them little to do besides aid Bond in his mission. The plot’s machinations send him from Cuba to Norway to a small Japanese island, where the story comes to a close in Lyutsifer’s secret lair, a former missile complex.

Fukanaga delivers a good-looking movie with a couple of fine action sequences, but No Time to Die doesn’t dazzle. In the wake of Skyfall (2011), it’s difficult to imagine another James Bond movie looking half as good, thereby making every subsequent entry a mild disappointment. Cinematographer Linus Sandgren uses a foggy Norwegian forest for a gorgeous shootout, and production designer Mark Tildesley creates some memorable sets, particularly the cell holding Blofeld (Christoph Waltz) and Lyutsifer’s aforementioned lair. There’s an impressive extended take, recalling the one in Atomic Blonde (2017), where Bond makes his way up some stairs and takes out a barrage of bad guys, and it’s edited together to look like a single shot. Somehow, all of this makes less of an impact than Lisa-Dorah Sonnet, the little girl who plays the daughter of Madeline and Bond. Her delicate presence and quiet French voice humanize our hero in a way not felt since Casino Royale. They remind us that beneath the surface of Craig’s Bond, his harsh expressions, clenched jaw, and alcohol dependency, lies someone wounded, melancholic, and in need of someone else to love and trust.

Trust is difficult to come by in the spy game. So are happy endings, apparently. Craig’s finale (which I will discuss in detail, so skip this paragraph if you must) feels wrong. Certainly, Bond was bound to lose his life sooner or later. You can only save the world from supervillains for so long before one of them gets the best of you. But the climactic scenes in No Time to Die feel undeserving. Malek’s scenery-chewing performance as Lyutsifer finds him pontificating about how he and Bond are both heroes marked by the past. There’s a scuffle, and Lyutsifer scratches Bond with a cracked vial of blood. He has been infected with nanobots that will infect Madeline and Mathilde if they come in contact with Bond. So he resolves to remain on the island, where British missiles will detonate Lyutsifer’s nanobot farm. There’s a teary goodbye via earpiece radio, and there endeth James Bond, leaving his lover and daughter to live with nothing more than a memory. It’s a fitting end in some respects. Bond had to go eventually, right? But couldn’t he just retire from service, the way Connery, Moore, and Brosnan did?

While contemplating how preferable a happily ever after ending might’ve been—with Bond and his newfound brood playing on an isolated beach somewhere in the Caribbean, perhaps—consider a plot hole that may have saved our hero. When Q (Ben Whishaw, delightful as ever) gives Bond a watch that can release an EMP, the 007 uses the pulse to detonate a bionic eye inside a henchman’s head. So why can’t Bond use the same pulse to neutralize nanobots? After all, they’re microscopic machines, right? And if that wouldn’t work, couldn’t Q cook something up in the lab? In any case, the movie’s rules concerning this EMP are wildly inconsistent. At one point, Bond opens several electronic locks with his EMP, but it somehow doesn’t affect his radio earpiece. Although quibbles of this nature are best left to fanboy forums, the point is that the ending feels unearned and sloppy. The writers are more interested in propelling Bond to his demise than crafting a situation that feels like Bond’s death is necessary.

What’s next, then? Perhaps it’s another origin story on par with Casino Royale. James Bond seems to be taking the path of Batman and Spider-Man, where every few years the studios will start over with a new actor. a new timeline. But more than that—and this is the banality of it—they will doubtlessly retell his origin story and create a new Bondverse. Of course, James Bonds have come and gone over the years, but they rarely had beginnings or endings—not to the extent of Craig’s version, anyway. Earlier films did not build a universe in the manner of the MCU. It was unclear if Moore’s Bond had experienced everything Connery’s had, and that never mattered before. But general audiences today may expect a more connected cinematic universe, which makes Bond somehow more temporary. No Time to Die certainly proves he’s mortal. Will the same be true of the franchise? It’s both rewarding to see Craig’s version receive some finality but also grating to think that we might be introduced to another new recruit in a few years. That feels like a minor betrayal of what Bond fans have come to expect over six decades of mantle passing.

(Note: This review was originally suggested and posted to Patreon on October 26, 2021.)