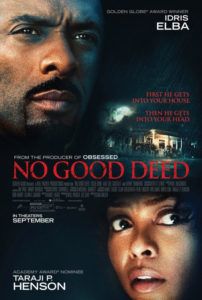 Idris Elba makes everything better, even a hackneyed home-invasion thriller modeled from Cape Fear. But not even Elba nor a talent like that of his co-star Taraji P. Henson can rescue No Good Deed from being a dull, poorly structured bore. British television director Sam Miller, who helmed episodes of Luther, brings little technical style to what might’ve been an exciting cat-and-mouse game. The result, co-produced by Elba and Henson, proves somewhat embarrassing for all involved. And not just because it’s formulaic and, at times, unintentionally funny; rather, because the film concerns Elba’s towering villain beating various women to a pulp, which isn’t a popular notion in the public eye right now.

Given the much-publicized security videos of the NFL’s Ray Rice beating his fiancé, and domestic violence against women a hot-button issue in the media, the film’s scenario is an ill-timed coincidence. Distributors at Sony Pictures canceled critic screenings on the week of its release, the official reason being they wanted to preserve a third-act plot twist for an unspoiled audience. Believe that if you will. Certainly, Rice’s activities and the film’s violence against women have inadvertent correlations; then again, Sony may have also canceled screening, as studios often do, after realizing they have a stinker on their hands. As for the top-secret twist, it will be discussed in detail within this review, so consider yourself forewarned.

Elba stars as Colin Evans, who, we learn from an expository newscast blurb, is a suspected serial killer of five women. Colin was eventually captured, but as prosecutors didn’t have evidence enough to convict this “malignant narcissist” for the murders, he served a short sentence for an unrelated barroom brawl manslaughter charge. After he’s denied for parole in the opening scenes, he escapes by killing two prison transport guards. Soon after, he pays a visit to his ex-girlfriend (Kate del Castillo), and let’s just say their reunion could’ve gone better. Later, on a dark and stormy night, Colin crashes his car near the suburban home of Terri (Henson). She’s a former state prosecutor-turned-housewife to inattentive husband Jeffrey (Henry Simmons) and two small children. With Jeffrey away for the weekend, Terri has planned a girls’ night with friend Meg (Leslie Bibb).

Being a former attorney, you’d think Terri would be smart enough not to let Colin in when he arrives on her doorstep, explains he’s been in an accident and asks to use the phone. But you’d be wrong. What’s even more unbelievable is that, as a prosecutor who specialized in domestic cases of violence against women, Terri never recognizes Colin’s face, despite his case (and no doubt his status as a fugitive) being national news. But Aimee Lagos’ script never addresses this. Anyway, Colin’s presence in Terri’s house is wrought with subtle flirtations between the two, and some no-so-subtle passes made by Meg. But once questions about Colin’s cover story prove unanswerable, things get violent, punctuated by the customary thunder and power outages at the most inopportune times.

The late-arriving twist that Jeffrey was having an affair with Colin’s late ex-girlfriend, and in fact, Colin’s seemingly random encounter with Terri is part of a larger master plan, falls completely flat. Since the material already borrows heavily from Cape Fear, the story would have benefited from the added suspense of knowing Colin’s plan early on, increasing the tension ten-fold. As Hitchcock once explained, suspense is built when you know there’s a bomb under the table, and yet the diners chat away, unaware that their table will soon explode. And while knowing that Colin himself is a ticking time bomb, No Good Deed could have increased our involvement if we had known just how much danger Terri had been in from the start.

At any rate, Elba and Henson both deliver serviceable performances, commanding the screen as effortlessly as they do. But Elba should have a serious discussion with his agent, because he’s much, much better than this. And yet, he seems to have a penchant for lousy scripts like Obsessed, Takers, and The Unborn. Henson’s character arc becomes a kind of “How Terri Got Her Groove Back” thing, whereby she kills the bad guy, gives her unfaithful hubby the boot, hires a nanny, and returns to the courthouse as the strong, independent woman she once was. However appealing the outcome of No Good Deed may be, the dullness that preceded it cannot be forgiven, especially when its brief runtime of 85 minutes seems to drag on and on.