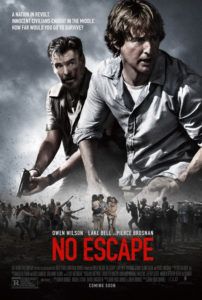 Western exceptionalism finds a new best friend in No Escape, a frantic R-rated thriller about an American family caught in a nightmarish Southeast Asian insurgency. It’s yet another film that concerns a culturally specific crisis through a white lens, though it would have been more effective, both politically and dramatically, had it focused on an Asian family trying escape their own country. Cast against type, stars Owen Wilson and Lake Bell carry a sweaty, frenzied intensity about them, bringing much to the overall film. But aside from Pierce Brosnan’s grizzled spy character showing up later and laying down the damnable sociopolitical and economic consequences of U.S. and U.K. imperialism, the film’s fast-paced presentation doesn’t allow the viewer to consider much else besides how nerve-racking the whole experience feels.

Originally titled The Coup, the film’s name was reportedly changed because test screening audiences didn’t know what “coup” meant. The lowbrow audience of director John Erick Dowdle, who wrote the script with his brother Drew, apparently hasn’t changed much since his earlier “found-footage” horror efforts, Quarantine (2008) and As Above, So Below (2014). With a larger budget and more talented stars than his earlier films, Dowdle delivers enough white-knuckle tension to secure him another job after this, even if the cultural implications will earn few approvals with critics. Nevertheless, audiences accustomed to watching people run away from mindless zombies will feel right at home watching Wilson and Bell scatter from a throng of bloodthirsty Asian rebels.

Set in an anonymous “fourth world” country, the film opens with a prologue where the country’s prime minister and a British businessman arrange a deal. A moment later, a group of rebels assassinates the prime minister (i.e. a coup). By the next morning, Jack Dwyer (Wilson), an American engineer who has just taken a thankless job with a water company under the naive belief that he’s going to help people, witnesses the insurgents taking to the streets in a violent demonstration. Along with his wife Annie (Bell), and their young daughters Lucy (Sterling Jerins) and Beeze (Claire Geare), Jack leads his family through a barrage of bullets, killings, and grisly violence to keep them safe.

Though it’s unclear exactly where the film is supposed to take place, my guess would be Thailand, where the production was shot. The director took a vacation there in 2006, just after the Royal Thai Army staged a coup d’état against Prime Minister Thaksin Shinawatra. Moreover, while shooting, rumblings of political unrest and protests eventually led to another military insurrection in 2014. To avoid pointing any fingers or causing an unwanted political conflict, the Brothers Dowdle have since removed all references to Thailand. In fact, they even drop hints that the story’s location might be Cambodia. Not that it matters. The film’s specifics have been so generalized and the story pared down to its basic elements that the country could be anywhere in Southeast Asia.

What matters most is that an American family is caught in the middle of a much larger conflict, and they need to find safety. In that sense, No Escape reminds one of Steven Spielberg’s War of the Worlds. Both films follow a sole family as they navigate a veritable war zone, ignore the countless dead around them, and keep moving only to witness further atrocities. In each film, the paterfamilias must regain the trust of his daughter, as well as beat a man to death for making too much noise. The only problem is, instead of aliens, the heroes in No Escape are running from faceless Asian bad guys. The association implies American lives are more significant than Asian ones, and in turn makes the Thailand (or wherever) population look monstrous, savage, and backward. Indeed, not one scene celebrates the beauty or cultural splendors of the location.

Although more than one heavy-handed slow-motion sequence proves overwrought, the director orchestrates high-tension moments with the shaky camerawork of Leo Hinstin and the cohesive editing by Elliot Greenberg. Consider the breathless sequence where Jack must toss his children to Annie from one building to the next—it’s such a gripping moment that I may have left hand-prints in my armrest. But elsewhere, No Escape resolves to ignore the hundreds of people that must die through the course of the story, not to mention any political commentary of substance and leaves us far more concerned that Beeze was forced to pee her pants rather than give away a hiding spot. Had the filmmakers told the same story in the middle of a zombie outbreak, this would be a raving review. As is, enjoying the film would have been easier if it wasn’t morally reprehensible for the message it sends.