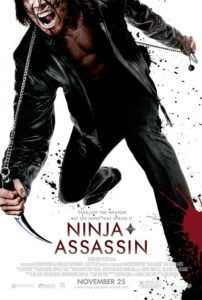 Ninja Assassin takes ultra-violence to an excessive extreme, even for ultra-violence. Within the first five minutes, someone’s head is diced in half. Arms and legs are chopped off like the dead limbs from a tree. Torsos are bisected diagonally and horizontally, sliding from their frame with gooey sound effects. Fingers are cut off so suddenly the guy reaching for his weapon has nothing to reach with. It’s all painted with cartooney, computer-generated blood, which makes for a quicker day of shooting when you don’t have to mop up gallons of fake blood.

Imagine a whole movie dedicated to the absurdist bloodletting seen in The House of Blue Leaves sequence in Kill Bill Vol. 1, where The Bride singlehandedly takes down the entire gang called the Crazy 88. In Tarantino’s film, it manages to be tongue-in-cheek and enjoyable for the ten or fifteen minutes it’s onscreen. In a 99-minute feature, however, the style is bogged down by its persistence. The violence starts off bloody as hell, and from there it has nowhere to go. The movie’s action plateaus in the first scene, saving nothing for what should have been the big finale. Instead, the final showdown is just more of the same.

Rain, the Korean pop star-cum-actor from Park Chan-wook’s I’m a Cyborg But That’s OK, stars as Raizo, a ninja who was taken as a child and raised by the dreaded Ozunu Clan. Instructed by Lord Ozunu (the effective Sho Kosugi), the clan’s students become deadly killers-for-hire, their rate of 100 pounds of gold per hit has remained constant throughout their hundreds of years in operation. In Berlin, plucky Europol agent Mika Coretti (Naomie Harris) stumbles upon the Ozunu Clan’s secret and begins an investigation into several governments hiring ninjas for political assassinations. When she’s targeted for her inquisitiveness, the band of ninjas sent to take her out meet with Raizo, who, we learn through flashbacks, has rebelled against his troupe because of Lord Ozunu’s callousness.

Packed to the brim with martial arts action, the movie alternates humdrum sequences of investigatory nonsense with long and gory fight sequences, enough to please the 13-year-old boy in all of us. The ninjas move so fast, sometimes they’re a computer-animated blur, disappearing into the shadows because of a special effect, not because they’re cleverly hidden. Throwing stars trailed by bullet-time streams flash across the screen into some poor sap’s body. Swords hack off limbs that pile up on the floor. But something called a Kyoketsu Shoge gets the most attention; it’s basically a knife on the end of a long chain that Raizo whips about to slice up his victims from afar. It makes for the sloppiest, most sudden attacks of unbridled carnage.

Director James McTeigue bragged that he wrote the script in 53 hours after the producers, the Wachowskis, called him and asked him to re-write the existing script and prepare for direction six weeks before shooting began. Given the result, that’s not something that he should be crowing about; he should be hiding it in shame. He based his script partly on those cheesy 1980s ninja action movies like American Ninja and Enter the Ninja, as well as several anime series, including Ninja Scroll and Samurai Champloo. The result feels like an amalgamation of corniness and highly stylized violence. McTeigue served as an assistant director on The Matrix Trilogy and Speed Racer, and the Wachowskis promoted him to helmsman on V for Vendetta, the result proving impressive. If only the script were given more consideration.

That being said, Ninja Assassin isn’t a bad movie; it’s just not very involving. The viewer watches from a safe distance as limbs are lopped off and blood erupts from the body like volcanic blasts, but the ninja rules of reality are ambiguous. For example, did you know that ninjas, who learn to control pain and their body’s physical processes, can heal severe wounds by force of will? One scene features Rain meditating until the gaping wounds in his stomach seal up. Neat trick, huh? Rain isn’t given much room to display his acting chops, because, you know, his character is an emotionless ninja, whereas Harris keeps the movie going as an affable leading lady. But nevermind the actors. Blood is the main character. For anime and videogame addicts accustomed to such carnage, the movie might be a fun diversion; but for the average moviegoer, the over-the-top violence will stimulate little more than a “Yuck” reaction.