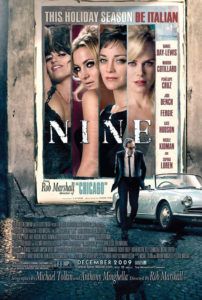 In 1963, Italian auteur Federico Fellini made his autobiographical masterpiece 8½, a film about a director struggling to pull together his thoughts for his latest film, a science fiction epic. Playwright Mario Fratti adapted the film into a play. From that play, the Tony Award-winning Broadway musical Nine was developed in 1982, at which time Arthur Kopit’s novelization of the same name was released. In recent years, writers Michael Tolkin (The Player) and the late Anthony Minghella (The English Patient) adapted the musical using these various sources, and Chicago director Rob Marshall has now brought it to the big screen.

Each new version of the story removes some of the brilliance of Fellini’s original, peeling away layers until what’s left is nothing but a simple account of a man-whorish Italian director. Fellini conceived 8½ after achieving international fame with La Dolce Vita in 1960, during a period wherein everyone was asking what his next project would be. With the pressure on, Fellini envisioned a film about a director with an artistic block, who then takes pieces of his life and incorporates them into the fantasy of his next picture. Of course, this is exactly what Fellini did to make his film, but strangely that flourish isn’t reused in Marshall’s Nine, an unsavory and jumbled musical that replaces the bravado of Fellini’s masterwork with cleavage, burlesque costume design, and the misuse of great actors, almost all of them Oscar-winners: Daniel Day-Lewis, Judi Dench, Penelope Cruz, Marion Cotillard, Kate Hudson, Nicole Kidman, and Sophia Loren.

Day-Lewis plays Guido Contini, a virtuoso director of 1960s Italian cinema whose next film isn’t coming to him. His producer and creative team want a script, but he hasn’t written a word; he confesses as much to his confidant makeup and costume lady (Dench), who dismisses Guido as an absurd genius. You’ll agree with the absurd part. Meanwhile, he’s cheating on his wife, Luisa (Cotillard, in another strong performance), with this and that trollop from his mistress, Carla (Cruz), to his leading lady, Claudia (Kidman, who can’t quite pull of Claudia Cardinale and Anita Ekberg). So Guido laments his creative and personal woes until the bottom drops, and after a hiatus, in the end, he resolves to continue making movies despite his flaws. (It should be noted that Fellini’s ending was nowhere near as sunny, but musicals have a way of needing to wrap things up with a big red bow.) 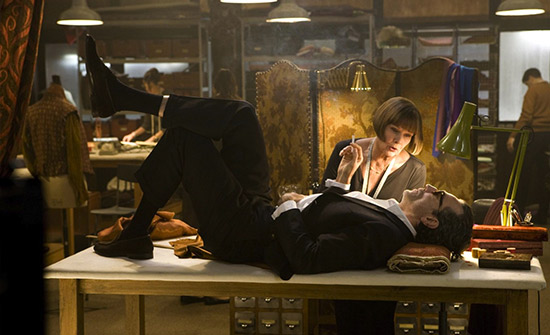 There was a special luster within Fellini’s film, in that the story he was telling was his own; his involvement on and off screen made the eccentric, whirling frenzy approach of the direction autobiographically linked to the power of the narrative. The images we see in 8½ exist as the filmmaker’s actual fantasies and anxieties transformed into that of his character, whereas through the filtering process from play to book to musical, the story is stripped of its potency and left with the basics. This musical reduces Fellini’s brilliant, complicated film into a rather repugnant story of an egomaniac who wants everyone to feel sorry for him because he’s in pain—an apparently dreadful condition where he’s compelled to have sex with beautiful actresses without consideration for his even more beautiful wife.

It doesn’t help that Day-Lewis doesn’t have the romantic (pointedly “Italian”) charms of 8½ star Marcello Mastroianni. He’s an incredible, incomparable actor to be sure, but somehow Mastroianni made the character of Guido seem comic and tragic, versus Day-Lewis’ sleazy and overly intense interpretation. Javier Bardem (of No Country for Old Men and Vicky Cristina Barcelona fame) was originally set to star, and one can’t help but think of how much Bardem’s charisma would’ve helped the role. Day-Lewis spends the film behind sunglasses, smoking and staring off into the distance to cue another song. He never becomes the tortured genius everyone in the film is talking about, just a pathetic philanderer, and we only learn anything about him through what other people say.

The onscreen persona of the lead actor notwithstanding, Nine is little more than a glorified peep show, with musical numbers awkwardly interrupting the story with their unvarying visual style. Each number appears on the same unfinished stage erected for Guido’s nonexistent movie, the songs sung in theatrical lighting by the various women in his life, and the background dancing completed by skinny female performers in various trashy costumes. And aside from Dench’s Parisian tune “Folies Bergere,” and “Be Italian” as sung by pop star Fergie (who surprisingly packed on a few extra pounds to resemble a real woman), the songs are forgettable and on a separate plane from the story, which goes nowhere beyond half-naked ladies singing eye-rolling lyrics about Guido to no end.

But you can’t blame the talent for being involved in this project. On paper it all sounds extravagant and sexy and audacious, the reputation of the material renowned. Then look at the cast, the writers, and the director, and you’re bound to find someone there whose work you respect. But there’s only so much machismo an audience can take. Even 8½ tests that boundary, and it’s redeemed of its narcissism and omnipresent male fantasy by being a singular metaphor of Fellini’s creative passion, therefore allowing for a deep human tenderness that doesn’t exist here. Nine serves the audience a musical striptease (almost every actress in the cast sings and strips), with some intermittent scenes about a character described only by what other people say about him. The potential for the film to connect with anyone in the audience is nil.