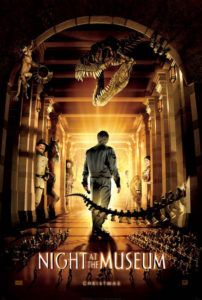 In the vein of better movies like Jumanji and Small Soldiers, which aren’t too great themselves, Night at the Museum is an entertaining but highly flawed movie. The special effects are impressive and about half the jokes are chuckle-worthy. Though, I expected more. I should have known to anticipate less from a Ben Stiller movie, as his track record in the last few years has been none-too-impressive. I didn’t expect to be treated like a child, however. (The film is rated PG. Maybe I should have expected as much?) Stiller plays Larry Daley, the new night watchman for New York City’s Natural History Museum. He takes over for three elderly guards: the lively Dick Van Dyke, Mickey Rooney, and Bill Cobbs, all of whom I wish were in the movie more. Unbeknownst to Daley, at night the museum’s exhibits come to life… Antics ensue.

Stiller’s character is a divorcee and has a general case of bad luck; he’s also anxious to impress his son, Nick (Jake Cherry), who’s losing faith in his father who can’t keep a job or an apartment. Daley’s ex-wife is remarrying and the new man is a successful stockbroker, played by Paul Rudd in a funny-but-pointlessly cameo. Desperate to stabilize his environment and relationship with his son, Daley reluctantly takes the night watchman position. These clichés are padded on so heavily, my leg bounced for the first fifteen minutes, hoping Daley would just get to the damned museum already so my boredom would die with the onslaught of CGI museum creatures. Stiller has played the neurotic guy who gets crapped-on more than once (see Meet the Parents, There’s Something About Mary, and nearly every other of his movies). For the last five years or so, he’s been coasting through roles. Save for The Royal Tenenbaums and his first neurotic guy performance in the hilarious Flirting with Disaster, his roles are simply variations of the same character. His performance in Night at the Museum bears obvious parallels to his previous work, including several moments when I could have sworn Stiller was using identical dialogue to his character Meet the Parents. It’s a sleepy, uninspired, and familiar performance.

The reanimated museum is like a day on a movie studio lot. It’s the real star of the movie. The spree of characters includes civil war soldiers, taxidermied animals, fossilized dinosaur bones, ancient relics, Huns, a bronze Christopher Columbus, and Teddy Roosevelt—nothing we haven’t seen before. But when we see the exhibits come to life, the movie doesn’t become any more than mildly amusing (I was most notably thrown off by the Easter Island moai head, voiced by Brad Garrett, as without explanation it repeated phrases like “Dumb-Dumb” and “Gum-Gum.” I truly can’t figure out why). This environment could be a CGI wonderland to teach audiences something about history, if only a fun fact here and there. You’d think coming from a movie that takes place inside of a museum that the audience might learn a little, but you’d be wrong.

Toward the end of the movie, Carla Gugino’s museum guide character, who just happens to be writing her dissertation on Sacajawea, finally meets Lewis and Clark’s famed guide in person (in wax sculpture form). Given the opportunity to reinspire her failing “900-page book” on Sacajawea by actually meeting the historic icon, Gugino’s character can say nothing more than “You rock!” I chuckled at first, but then realized the film’s producers missed a great opportunity to simultaneously educate and entertain audiences. I’m not expecting any scholarly history lesson embedded into a film like this, but something more than what I learned in 2nd-grade history would be nice.

The movie’s two redeeming qualities were the bit roles played by Steve Coogan and Owen Wilson, as miniatures of a Roman soldier and a cowboy named Octavius and Jedediah respectively. Coogan, wonderful in last year’s wonderful Tristram Shandy: A Cock and Bull Story, makes the film’s stupid humor sardonic. Whereas the peak of comedy for Stiller’s Frank Daley is being slapped by a monkey, Coogan and Wilson’s characters deal with the irony of their size versus their ambitious personalities. At one point late in the film, Octavius, Jedediah, and a group of other two-inch miniature Roman soldiers attempt to flatten a tire on a van, which to them is gigantic. They jamb a spear into the tire’s gauge, and as though they’re standing in the way of a great force of nature, the soldiers are blown away. The shot pulls back to show the whole van and we hear only a gentle hiss; back to the miniatures the roar of the slowly leaking tire means peril. These subtle gags follow Octavius and Jedediah throughout the movie and always point out the greatness of small things.

Night at the Museum has the opposite problem: it’s a huge looking movie, but it delivers very little. Like many Hollywood blockbusters, if you think about it too much, it’s terrible. If you ignore that the film is treating its audience like we’re seven-year-olds, if you ignore the endless character clichés and the film’s painful first fifteen minutes, if you ignore that Ben Stiller is just playing Ben Stiller (for about the twentieth time in his career), then you’ll be entertained by a gag here and there, particularly by the supporting characters. If you can’t look past these faults, there’s not much here to enjoy.