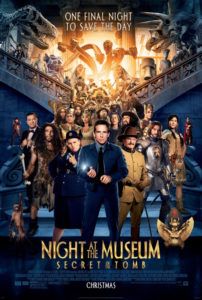 Night at the Museum: Secret of the Tomb forces one to consider how the filmmakers convinced so many talented people to agree to such a lackluster movie. Series star Ben Stiller was probably signed to multiple sequels after the first one became a box-office hit in 2006, so he gets a pass. Surely series regulars Robin Williams, Owen Wilson, Steve Coogan, and Ricky Gervais could get away with that excuse as well. But what about, Ben Kingsley, Dan Stevens, Alice Eve, and Hugh Jackman? Besides their no doubt hefty paychecks, what were their excuses for signing on to this dead-weight-of-a-movie? Perhaps no excuse beyond money is needed. But this critic would like to think their cameos and supporting roles were part of an elaborate blackmail scheme and the performers had no choice. At least this way, I can still respect them.

Stiller and company return for a third helping of the mind-numbingly dumb antics here, and it promises to be the last entry in the franchise that stars Stiller. That’s the good news. The bad news is that Rebel Wilson seems to be next in line to take the museum’s night watchman duties. But I’m getting ahead of myself. There’s an inane plot, cheap special FX, and lazy jokes to consider first. Stiller returns as Larry Daley, whose son Nick (Skyler Gisondo) wants to be a DJ in Spain. Larry wants Nick to attend college, because if Nick doesn’t go to college he’ll end up watching over wacky museum exhibits that come to life at night. And no one wants that. After all, despite working in a museum, he wouldn’t learn a damn thing. There’s an ongoing theme in Secret of the Tomb about letting go and saying goodbye, which Larry must do with his son, the New York Natural History Museum exhibits, and ultimately his job.

Anyway, the plot hinges on the magical Egyptian amulet that allows the museum exhibits to come alive—it’s corroding, you see, and if it crumbles away then the exhibits won’t be able to reanimate any longer. So Larry and Nick concoct a plan to head to the famed British Museum where Ahkmenrah’s (Rami Malek) father (Kingsley) can shed some light on how to restore the amulet’s power. Once there, Larry has to outwit a dimwitted night watchwoman (Rebel Wilson) and make his way through the newly alive museum to get answers. Joined by Teddy Roosevelt (Williams), the miniature Octavius (Coogan) and Jedidiah (Owen Wilson), Sacajawea (Mizuo Peck), Attila the Hun (Patrick Gallagher), the series’ slap-happy capuchin monkey, and a caveman (also Stiller) that believes Larry is his father, Larry and his son maneuver through the British Museum’s exhibits.

Turns out the British Museum is very much like New York’s Natural History Museum, complete with puppy-esque dinosaur skeletons and snarky exhibits oddly familiar with modern pop culture. Along the way, Larry and Co. meet Lancelot (Stevens, aptly heroic), who protects them from a number of threats and then himself becomes an obstacle. The gang needs only to get through the museum to Ahkmenrah’s father, and that setup somehow consumes the movie’s 97-minute runtime, with a good portion of the action involving a chase through London. The momentum ends when Lancelot arrives onstage next to Hugh Jackman and Alice Eve, playing themselves in a production of Camelot. Seeing Stevens and Jackman share a scene makes one realize how underused Stevens is here, and how much better he could be doing elsewhere. It all ends with everyone dancing to “Boogie Wonderland” for some reason. Who can say when these exhibits learned about Earth, Wind & Fire.

Rehashed jokes about the monkey urinating on people and the diminutive size of Octavius and Jedidiah wear thin, leaving just a mildly amusing gag about Lancelot’s wax nose melting to incite a chuckle among an otherwise laughless audience. Rebel Wilson performs her usual I’m-fat-and-awkward-and-I-know-it routine, which is painfully unfunny and has long since run its course. Nonetheless, if Secret of the Tomb performs well at the box office, you can expect a British-inflected sequel starring Wilson and her costars from across the pond. Audiences should prepare to once again learn absolutely nothing about history despite the museum setting, as series director Shawn Levy and writers David Guion and Michael Handelman pander to the lowest common denominator. But at least, for now, the museum seems to have closed its doors. At least something good came out of it.