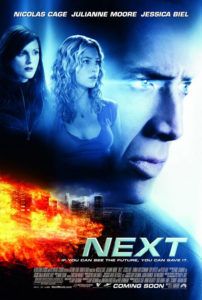 Nicolas Cage stars in and produces Next, a poorly-executed science fiction film based on Philip K. Dick’s short story The Golden Man, proving as Tom Hanks did in The Da Vinci Code that hair alone can ruin a performance. Not that Cage “performs” per se… more like acting not weird. From Wild at Heart to Ghost Rider, audiences have been subjected to Nicolas Cage’s love for overacting for years. With his last few performances, he’s been turning into a growing camp legend. What happened to the Nicolas Cage from Adaptation and Leaving Las Vegas? While unintentionally giving his performance in Next his signature “Nic Cage” ham and cheese, it’s his hair that I can’t swallow while munching on this filmic sandwich.

Cage plays Cris Johnson, a Las Vegas magician with precognitive abilities. His talent allows him to see two minutes into the future. As a performer, he predicts what people will say and do, combining his psychic talents with sleight-of-hand trickery. He believes in destiny, that everything has a meaning, so when for some reason he sees himself meeting a beautiful woman (Jessica Biel) at a diner several days into the future, he knows it’s something important. Every day he waits there for her until she finally shows up for a meal. Able to forecast in a split-second every possible outcome of a given situation, Cris can choose the behavior that will best suit him to win the woman’s heart.

One could argue that being able to predict the future and change it at will removes the possibility of fate or destiny in which Cris so heartily believes. (This plot hole is one of many reasons Gary Goldman, creator of the screen story, should have stuck to the flawless source material.) Julianne Moore plays a government agent obsessed with Cris. Always yelling and barking orders, Moore wastes her talents by including herself in such an inexplicably angry one-note role. When terrorists arrange to bring a nuclear weapon into the country, Moore’s character solicits her government superiors to attain Cris’ help, voluntary or not. Moore’s character believes all available resources should be spent on obtaining Cris so he can foresee where and when the terrorists’ bomb will go off.

The movie doesn’t explain why Moore’s character doesn’t just, you know, do some investigating, rather than relying on a precog that can see only two minutes into the future. If her plan worked but the bomb was a few hundred miles away, how did she expect the government to appropriately react? And who are these terrorists with unexplained origins and motives? They all speak with European accents, some French, some Slavic, and some Germanic—fueling unneeded anti-foreigner stereotypes all too prevalent in today’s cinema. The terrorist leader, played by German-born actor Thomas Kretschmann, wants Cris dead—but why? So he can get away with what? Why do these terrorists have a bomb? Do they have demands? Was anybody paying attention during the scriptwriting process? All of these questions remain annoyingly unanswered, and when the film ends, you’ll throw your arms up in amazement at how little happens in Next.

The plot makes no sense, but audiences shouldn’t blame Dick’s superb short story. I’m not sure why Dick’s name or story even receives credit; the text and film are completely unrelated narratives. The Golden Man tells of a precog relying on his abilities like an animal and, in the end, suggests that humans will eventually evolve back to predisposed intuition rather than logic or emotion. Dick’s version of Cris is a mutant in a world where mutants are a known phenomenon; the main characters are the government agents tracking him down, as Cris himself lacks any personality beyond that of genetically disposed instinct. About the only thing Next kept from Dick’s story was the h-less spelling of the protagonist’s name.

Next gets the one thing it has going for it—its high-concept—wrong. It takes place in a world depicted just like our own. It’s seemingly set in the present day; precognitives don’t appear to be commonplace, whereas the film could have benefited from a future world setting. And then there is Cris’ abilities, which waver—in one scene he can see only two minutes into the future; later he sees a whole day without explanation. This inconsistency left me without a clear grasp of his gift.

Given Philip K. Dick’s impressive book-to-film history—which includes Blade Runner, Total Recall, Minority Report, and A Scanner Darkly—you’d think Hollywood would see the potential in using his fantastic intellectual theories on contemporary and future societies to construct an intelligent and entertaining sci-fi picture. All the aforementioned films merge big ideas with undeniably entertaining presentations. Nonetheless, Next is one of the wanderers off the path. Alas, we can inscribe Next on the list with Paycheck and Impostor of dumbed-down Philip K. Dick adaptations that remove all subtext from his brilliantly complex storylines, concentrating on a bare bones abstraction of his original sci-fi foundation.