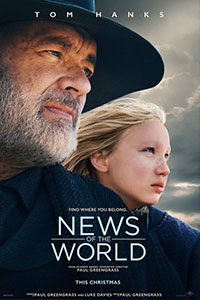 News of the World looks like a classical Western, but looks can be deceiving. Its classicism is contained in director Paul Greengrass’ uncomplicated presentation. The simple, unflashy look contains no pretense or pretension. It seems to demand little of the viewer, offering routine visuals that resist postmodern flourishes of form. And what could be more agreeable than a hero played by the beloved Tom Hanks? But then the story begins to confront matters of American history, asking that its characters inform their future with the past—something that, if the 1776 Commission is an indication, certain Americans continue to struggle with. The film takes place in the 1870s, and yet it achingly reflects today, and through its story, administers a condemnation of the ideals that guide classical Western storytelling. But no matter how applicable its themes prove to be, as a film, News of the World feels somewhat underwhelming and conventional, if also entirely watchable.

Based on Paulette Jiles’ novel (and not the Queen album), the film unfolds in the aftermath of the Civil War, a period during which many Texans felt disenchanted and angry about the Constitutional amendments that abolished slavery and gave former slaves voting rights. The story follows Captain Kidd (Hanks) as he travels from town to town through northern Texas, where he reports the news for anyone willing to pay—hunched over, reading from various newspapers through a small magnifying glass. When he discovers a young orphan named Johanna (Helena Zengel), who was recovered from the Kiowa tribe that killed her family, he begrudgingly agrees to return the girl to her relatives near San Antonio, which he once called home. What follows is a 400-mile journey with several stops and detours. Kidd and Johanna encounter a trio of bandits intent on buying the girl as a sex slave; later, they find themselves lost in a sandstorm. Along the way, of course, Kidd and Johanna, both loners without roots, form a bond—they teach each other their respective languages, and they come to rely on one another.

Beyond this basic, episodic setup, News of the World supplies a road movie appeal, as Kidd and Johanna mosey along the dusty trail. It’s pleasant enough just watching Hanks do his thing, talking to his ostensibly mute traveling companion in a mostly one-way conversion. Elsewhere, when he takes to the stage and calmly addresses his paying audience to help them “escape our troubles and hear the great changes that are happening,” he commands the screen, his nuanced and deeply human presence doing most of the work. However, the scenes of Western action feel flat by comparison to Hanks’ smaller, character-based moments. A shootout in the hills falls mostly flat, and an out-of-control wagon sequence, rendered with some iffy CGI, feels underwhelming. But this isn’t a film about gunfights and chases. It’s more ponderous than that, making the attempts at action feel out of place. 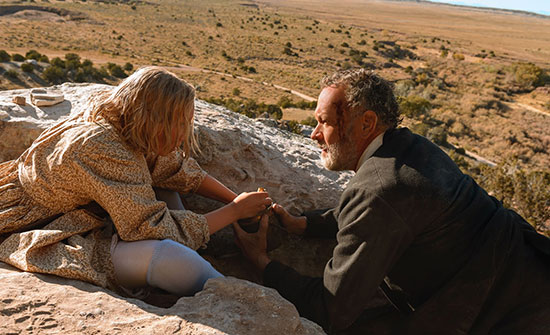 Given this emphasis on character over action, it’s surprising to find Greengrass at the helm. The director has carved out a niche for himself with a cinema vérité style that lends a gritty substance to three Jason Bourne movies and docudramas like United 93 (2006) and 22 July (2018). Although he teamed with Hanks once before on 2013’s superb Captain Phillips, featuring one of the actor’s finest performances, he sets aside the aesthetic that has defined him for twenty years to turn in a film devoid of much style at all. News of the World is so straightforward that it could have been made by anyone, which is to say the craft is mostly invisible. Greengrass relies on sweeping overhead shots of cattle, vast landscapes captured on location in New Mexico, intimate close-ups of his performers, and stable camerawork by cinematographer Dariusz Wolski (a regular collaborator with Ridley Scott). Greengrass’ name on the credits causes us to double-take, if only because he’s never made a film that looks like this before.

Had the film looked like other Greengrass pictures, it might have over-emphasized its remarks about contemporary sociopolitical issues. At one point in our hero’s journey, he comes upon a town run by one Mr. Farley (Thomas Francis Murphy), who oversees an entire county. Mr. Farley has organized his people to run Native Americans and people of color out of town, and he has authored a local newspaper that sings his own praises. Farley orders Kidd to read from his newspaper, but Kidd sees through Farley’s self-aggrandizing and asks the townsfolk to vote on it. The vote does not go as Farley plans. This subplot gives way to a commentary about what we might now recognize as Trumpism, even though it’s been happening for centuries. When you control information with propaganda, you control people. Give people a choice to learn, and you lose control over them. It’s a small interlude that lands in the middle of the film, but it feels like the sequence that attracted everyone involved to the material.

There’s a resonant debate between Captain Kidd and Johanna at the film’s center, questioning whether a person should progress in a straight line (as many Western characters do, driven by Manifest Destiny) or adopt a more holistic outlook on the world (as the Kiowa do). Ultimately, our heroes cannot grow by only looking forward; they heal by confronting the violence and tragedy of their pasts. Given the film’s time and place, its lessons extend to America’s need to heal after the Civil War. They extend further to the culture war of the last four years, which, in a myriad of ways, has been defined by a willingness, or lack thereof, to acknowledge the past and present sins of America. It’s a worthy commentary saddled by a rather plain, meandering entry in the Western genre with no more than two or three memorable scenes. But then, appreciating how News of the World is greater than the sum of its parts is sort of the point.