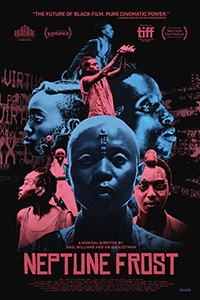 Note: Screened at the 2022 Minneapolis St. Paul International Film Festival in May 2022. Kino Lorber has distributed the film in limited release and on their streaming service, Kino Marquee.

Neptune Frost fashions an identity for itself, jettisoning conventional methods and narrative structures of Western filmmaking. An Afrofuturist rallying cry crafted by two multi-hyphenated artists, the film uses Saul Williams’ fifth album MartyrLoserKing as a launchpad, propelling the viewer into the cosmos with the help of Rwandan actor-playwright Anisia Uzeyman. Songs from the album are reworked and revisited, adapted into Kinyarwanda and Kirundi by the cast, and performed in new environments and contexts—specifically, the cyber-haven Digitaria. Placing a label on the result is difficult and decidedly against the point. Instead, co-directors Williams and Uzeyman explore the destructive forces of capitalism and colonialism through a direct discourse with the viewer, using elements of musicals, political statements, and rebellion from inside a digital dreamscape. Early on, an intersex hacker named Neptune (Elvis Ngabo, then later Cheryl Isheja) looks right into the camera, confronting their audience with the reality of our participation in the systems that exploit African people and resources, and calls out to anyone across the globe who doesn’t fit into a socially constructed box.

Of course, there’s a certain irony in renting Neptune Frost on a streaming service or paying for a movie ticket at a theater chain (even an independently owned theater chain), only to watch a film that decries the capitalist system in which we consume it. But that’s the nature of motion pictures and most other art forms; there’s a compromise between art and commerce, one relying on and often incriminating the other in service of acquiring and speaking to an audience. Williams acknowledges as much in his ongoing multimedia project, MartyrLoserKing—named after he heard an apt mispronunciation of “Martin Luther King”—a project that unfolds over music, graphic novels, and now cinema. Despite its roots in science fiction and musicals, the film doesn’t so much tell a story as represent an unflinching anti-establishment perspective that rarely occupies mainstream movies. It’s not about overcoming conflict or character growth; it’s about sending out a message that confronts social injustice and inequality. Williams and Uzeyman, married, explore the fluidity and interconnectedness of gender, community, time, and consciousness when not dominated by traditional cultural precepts.

Williams and Uzeyman tap into these ideas through a loose narrative about disparate cyber-punks, runaways, and rebels joining forces. Early in the film, Neptune escapes an oppressive church, a site of cultural colonization. Elsewhere, Matalusa (Bertrand “Kaya Free” Ninteretse), a Burundian coltan miner, flees an exploitative mine rooted in a capitalist system. Coltan is a pointed choice for Williams, who wrote a poem in 2015 called “Coltan is Cotton.” The metallic ore is used to make tantalum capacitors used in everything from smartphones to pacemakers, and it goes for top dollar to various capitalist superpowers (in China, for instance, often mentioned in the film), resulting in the manipulation of underdeveloped regions in Africa to mine this valuable natural resource. But before Neptune and Matalusa meet, the filmmakers imply their connection through the electronic tones that hum on the soundtrack, hinting at their mutual subjugation in an errant industry. The film underscores how something as simple as texting on your smart device necessitates a vast and often unseen network of human exploitation. 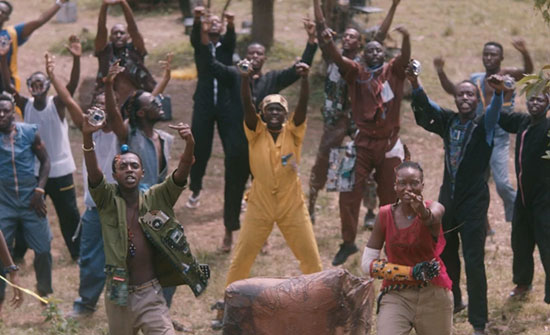 Later, Neptune and Matalusa connect, creating a community that will embrace each other in rebellion at the intersection of their physical, spiritual, and digital realms. Once the various parties join forces in Digitaria—a homemade digital dreamscape situated on a pastoral landscape—music and dance unify the collective. Together, they defy any labels except their own, dissolving into a simultaneously non-binary individualism and resistant collective determined to redistribute conventional power. But most of Neptune Frost functions in abstract, if not occasionally head-spinning scenes that demand audience interpretation. Characters go through rituals and speak in declarative statements—accented with a heavy reliance on confusing Afro-science technobabble—that sometimes feel preachy. However, it’s all in service of Williams’ desire to challenge the apathetic state of the system that drives inequality and economic disparity throughout the world.

If the moment-to-moment storytelling can prove challenging to follow, its visuals remain hypnotic. Neptune Frost looks entrancing and quite unlike anything else, thanks to Rwandan artist and designer Cedric Mizero. Digitaria has been assembled from an array of futuristic technologies and ramshackle bits of cords and monitors, incorporating them into a distinctly local vibe. The costumes sometimes have a traditional cultural look or might have circuit boards and gizmos woven into the fabric. Uzeyman, also the cinematographer, captures these designs with crisp digital photography. The most striking touches involve a glowing ultra-violet dreamscape of neon colors in sequences that boggle the eyes and mind. Following Williams’ message about outsiders and rebels joining their unique identities, the film’s visual agenda blends the analog and digital, the physical and technological, and gives everything a hands-on feel—save for the digitally rendered floating blue rocks that appear almost at random.

At a certain point, a rousing drone shot lifts into the air, and the citizens of Digitaria watch it rise, flashing their middle fingers and hurling insults in defiance. Although angry and frustrated, Neptune Frost claims a proud space for the outcast and tyrannized. Williams’ political and artistic statement calls for a stronger sense of community among those who don’t fit into normative societal definitions and want out of the capitalist rat race. Finding its way through song, statements, and expressive scenes, Neptune Frost is about people taking control away from their oppressors by using the technology that subjugates them and reformatting it to create something new. Members of the community remain vitally aware that their new nation of technology and spirituality has been repurposed and recontextualized, as opposed to built from the ground up, and therefore they remain dependent on colonialist and capitalist systems. But in the end, it’s less concerned with origins than people piecing together a place for themselves, away from controlling ideologies that attempt to enforce strict labels on modes of artistic expression, gender definition, or existence.