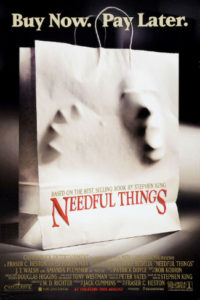 A helicopter shot races over a lighthouse in the opening of Needful Things, an adaptation of Stephen King’s 1991 novel. It’s the same lighthouse from the logo of the production company, Castle Rock Entertainment, which Rob Reiner formed when he adapted King’s story “The Body” into Stand by Me (1986). Reiner’s company would go on to make several more King works, some of them great (Misery, 1990) and others not so much (Dreamcatcher, 2003). Needful Things belongs somewhere in the middle; it’s far from essential, but it’s the sort of movie that fills the time on a lazy afternoon like a passable book by the famed horror author. The screenplay by W. D. Richter reduces King’s nearly 700-page novel, one of his most unchallenging but enjoyable, down to its most sensational characters and their most vile crimes, excising the inner psychology that makes his books so immersive. It’s a recurring problem with King adaptations, such as both versions of Pet Sematary (1989, 2019) and maybe a dozen others. Fortunately, it’s a well-acted and even entertaining movie whose sense of fun is predicated on watching small-town rubes succumb to the whispers of the devil.

The story is a variation on a King theme: A mysterious outsider drives into a quiet Maine hamlet, the sort where everyone knows everyone else’s business. The stranger buys an old building and transforms the space into an antique shop, peddling his wares to the locals. Not long after his arrival, however, the townsfolk begin to change. It’s a setup that recalls King’s second book, Salem’s Lot from 1975, which Tobe Hooper made into an atmospheric television miniseries in 1979. Except, instead of a nest of vampires, Satan operates the antique shop in Needful Things, and he’s played by an uncharacteristically tongue-in-cheek Max von Sydow. The devil, appearing in the shape of an older gentleman named Leland Gaunt, brings out the most selfish aspects of humanity by preying on their materialistic greed. He bamboozles the citizens of Castle Rock, convincing them to buy their most desired trinket in exchange for a series of random misdemeanors that naturally escalate into murder and chaos. Fictional Maine burgs often come apart in King’s novels, whether they’re brainwashed by a buried UFO or trapped under an invisible dome. It’s an idea that, like many others in King’s more than 60 books, seems to haunt him, causing him to return to the idea every few years on the page.

Ed Harris stars as King’s recurrent lawman, Sheriff Alan Pangborn, who remains a mystery to Gaunt. “I got everything I need,” he says, unequivocally. Not much Gaunt can say to that, except work his magic on Pangborn’s fiancée, Polly Chalmers (Bonnie Bedelia), whose debilitating arthritis presents Gaunt with a necessary angle. Everyone else in Castle Rock has comparatively petty needs, raising the question of why someone is willing to, say, murder a dog to acquire a jacket. He sells teen Brian Rusk (Shane Meier) a rare baseball card for a filthy prank. The victim of said prank, ill-tempered turkey farmer Wilma Jerzyck (Valri Bromfield), blames Nettie (Amanda Plummer), a former battered wife who’s now quite unhinged. Gaunt pits Wilma against Nettie, the local Catholic priest (W. Morgan Sheppard) against the resident Baptist minister (Don S. Davis), and several others against their fellow Castle Rockians. The best of the bunch is Danforth Keeton III (J.T. Walsh), nicknamed Buster, a local businessman, drinker, misogynist, and gambler—a heightened King type that ends up as a human powderkeg. ‘Round and ‘round it goes, with one character tormenting another, leading to a chaotic climax filled with grand speeches, complete with not one but two explosions, and townwide resolutions. 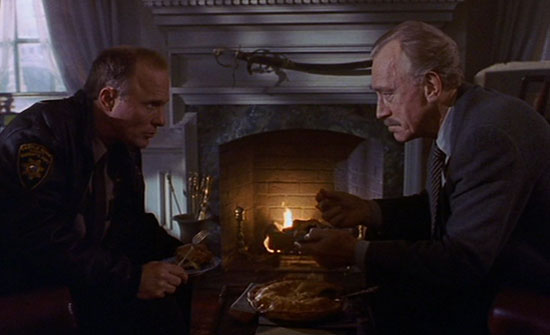 The movie was the first directorial effort by Fraser C. Heston, son of the former NRA president Charlton, who channels his father when Gaunt says, “Guns don’t kill people. People kill people.” The director also winks at von Sydow’s legacy in the movies. Hiring the knight who played chess with Death in Ingmar Bergman’s The Seventh Seal (1957) as the devil himself is a knowing bit of stunt casting. What’s more, Heston sets up a shot that resembles the iconic stairway from The Exorcist (1973), the film in which von Sydow played a priest who helped stop the devil, only to be tossed out the window and killed on those very stairs. It’s all capably shot by d.p. Tony Westman, who captures the autumnal appeal of New England, but Heston has turned Needful Things into the blackest of comedies, where movie references, spousal murder, and exploding churches stand in place of a punchline. When Keeton bashes his wife’s head in with a hammer—mercifully, an act that occurs between cuts—the moment plays him as comically incorrigible. “I killed my wife,” he confesses to Gaunt over the phone. “Is that wrong?” Of Walsh, it must be said that he steals every scene in which he appears.

Most of the conflict amid Castle Rock’s citizens has an element of humor to it, save for the attempted suicide of one character. When we see one of them manipulated by Gaunt, it’s not with a sense of dread for their immortal soul; it’s with the gleeful anticipation that Heston intends. King’s book reads differently, or at least the characters have the pages to become more than one-note personalities—devices to carry out a crime—as they are in this movie. Elsewhere, Gaunt is an incredible ham whose weapons of choice, besides Mephistophelian scheming, are the devilish puns in his arsenal. “You’re drenched to your soul,” he says, welcoming one shopper in from the rain. But later he warns, “I’m afraid I have a tendency to turn up the heat” (you know, in Hell). He wraps up goodies from his store in newspapers with headlines from mass murders and World War II, and in the evenings, he sits in front of the fire, listening to “Ave Maria” and allowing the camera to get a look at his yellow teeth and overlong fingernails. It’s all very cute if you’re in the mood for that sort of thing.

There are less obvious jokes too. I particularly liked the subtle detail of steam radiating from Gaunt in his shop as if he was still roasting from Hell. It’s the kind of detail that may not have shown up on a cable television screening from the 1990s, but it appears in high-definition quite well. With cable TV in mind, watching Needful Things today recalls a faint memory of a three-hour cut that played exclusively on television in the 1990s. It’s virtually impossible to find now, although if memory serves, it does clear up a few rogue lines of dialogue, some bad looping, and adds a few sizeable subplots, making it more faithful to King’s book. Still, the two-hour theatrical version contains some lively performances from Harris, von Sydow, and especially Walsh, even if the adaptation lacks psychological dimension. Reserved for casual viewing and macabre escapism, Needful Things manages to be watchable and forgettable all at once.