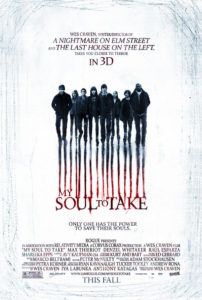 Wes Craven enters familiar territory with his latest body count movie, My Soul to Take, a shameful and thinly veiled offshoot of the director’s previous material. Nearly every plot point can be associated to former horror fare by the director, so the material feels vaguely familiar, though harebrained and clumsy in its execution. The scenario involves a masked maniac (Scream), the transmigration of a killer’s soul (Shocker), haunted dreams (A Nightmare on Elm Street), and plenty of small-town urban legends (all of the above) scrambled together into a choppily edited piece of hokum that barely runs 90 minutes. The result is one of the worst entries in Craven’s long career in the horror genre.

Sixteen years have passed since the death of the Riverton Ripper, a Connecticut killer presumed dead when authorities captured him and drove him into the river. He was a maniac with split personality disorder, whose wife, child, and unborn baby had no idea that their husband and father was the notorious murderer. On the night of his death, seven children were born, one for each of the killer’s seven personalities. And now, on their birthdays, these seven 16-year-olds gather from various high school cliques to propel the superstition that one day the Riverton Ripper with come back to claim their seven souls. If Craven bases his stories at all on his own experiences, his high school days must’ve been rough, as yet again, one of his movies features a clan of teens slain one by one by a masked madman.

The question is, who is killing the teens? Did the Riverton Ripper survive the ordeal years ago? The police never found his body, so it’s possible. Or perhaps it’s the Ripper’s ghost killing people? Or even better, maybe the Ripper has possessed someone to kill for him? Each of the seven teens (played by actors that could’ve been replaced by cardboard cutouts and we wouldn’t have noticed), comes from a cliché social group (the jock, the social butterfly, the outcast, etc.), leaving the movie with the vibe of The Breakfast Club—only where everyone dies. Max Thieriot plays the protagonist, named Bug, whose mysterious family past and probable mental problems lead to an underwhelming and predictable reveal in the finale.

This synopsis doesn’t mention other jumbled details, however, including one where Bug grows obsessed with California Condors because Native Americans believed they carried the souls of the dead. Nor does the synopsis include the jock’s sudden rapist-like desire for oral pleasure from the movie’s resident blonde bimbo, for which he chases her through the woods. Nor Bug’s ability to mimic his friends with almost precognitive detail. The only reason we’re privy to the idea of evil souls taking over others’ bodies is that, conveniently, there’s a knowing Haitian nurse in town whose mother practiced Voodoo (a topic covered in Craven’s The Serpent and the Rainbow). Most of the character developments occur in the school’s hallway passing time, whereas the kills are of the most eye-rollingly stupid kind. Take when the resident religious teen heads into the dark, damp pool storage room to track down a curious sound that calls to mind something like a knife being pulled from its sheath. Gee, think the killer’s in there?

Being the first movie where Craven takes sole writer and director credit since 1994’s Wes Craven’s New Nightmare, expectations were reasonably high—that film reinvented Freddy Krueger in a way that felt visceral and original for its franchise. And then Craven made Scream in 1996, from the clever, self-referential, formula-exposing script by Kevin Williamson. Both of those films worked within the boundaries of the slasher genre yet transcended them. But My Soul to Take feels like a grave step backward for the director, and it becomes apparent Craven has been working in this genre for far too long to remain pioneering.

Lately, Craven has been producing remakes of his own work, such as 2006’s The Hills Have Eyes, last year’s The Last House on the Left redo, and this year’s abysmal A Nightmare on Elm Street. And aside from the occasional standard thriller like Red Eye, his most landmark films come from the 1970s and 1980s. Perhaps the director has drunk the same Kool-Aid as the rest of Hollywood, which believes recycled ideas sell better than original ones. Rather than make anything new and engaging, it’s easier for Craven to make a mishmash of his own previously explored ideas like My Soul to Take or Scream 4 (now in production). This brand of storytelling, driven solely by marketability and convention, is taking its toll on modern cinema—but on no genre more than horror. As a mechanical, unsurprising, and quite awful experience, Craven should be ashamed for this movie and its contribution to a growing crisis within the industry.