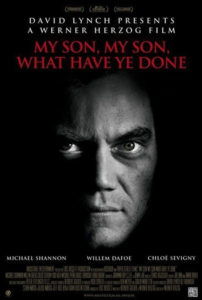 In regards to his behavior, Brad McCullum’s fiancée tells the detective, “Ever since he got back from Peru, he’s been strange.” This is an understatement. It seems Brad has been hearing an “inner voice” that’s coming from God. The voice told Brad not to go white water rafting on Peruvian rapids, so he didn’t; but when his friends did, they died. Now Brad believes that God lives in his mother’s kitchen inside containers of Quaker Oats. He also believes that his two pet pink flamingos, named McDougal and McNamara, are actually eagles in drag. Such mad theories and nonsense spew out of Brad lately, but when his batty logic is pointed out to him, he replies with a dead stare, “So what… So what… So what…”

In My Son, My Son, What Have Ye Done?, director Werner Herzog has found a story that allows him to defy standard modes of filmmaking in ways that moviegoers will not expect, nor possibly even understand. This is a polite way of saying that not many viewers with “like” or “get” this film. At first, his scenario seems like your typical hostage movie fare. Detective Hank Havenhurst (Willem Dafoe) attempts to talk armed loon Brad (Michael Shannon) into surrendering and releasing his two hostages from his suburban home in San Diego. The story was based on actual events, but there’s no doubt that Herzog and his co-writer Herbert Golder elaborated on the weird extremes of the character’s mental state. The result feels like Herzog handed his camera and script to Shannon’s character Brad and let him direct.

Who better to perform in such an enigmatic, madman role than Shannon, having played the embodiment of madness before in Bug, and madness by way of social deviation in Revolutionary Road? And who better to direct Shannon than Herzog, the maverick filmmaker sometimes described as mad himself? And if that wasn’t enough madness, who better to produce the picture than David Lynch, whose own elusive, bizarro films (Lost Highway, Mulholland Dr.) are bound to drive audiences mad when they try to decipher their meaning? This epic combination of talent and artistic eccentricity makes for one of the most remarkably odd films in recent memory, so even while the film may not make sense to many viewers, those who see it will not soon forget it.

Through a non-linear narrative, Herzog follows Brad’s gradual decline via on-the-scene statements from his fiancée (Chloë Sevigny) and theater director (Udo Kier) that pull the audience into flashbacks. They recount Brad’s curious behavior, which peaked when he slayed his mother (Grace Zabriskie) with a samurai sword, an object that had hypnotized him. Herzog makes occasional visits with Brad’s Uncle Ted (Brad Dourif), who proceeds to explain his plan for the world’s biggest rooster to chase a midget riding a miniature pony around the world’s largest tree. Uncle Ted also owns a farm of ostriches, which he calls “dinosaurs in drag”.  Meanwhile, Brad lives with his mother and harbors a nasty Oedipus complex. When his fiancée urges him to move out, he proposes buying a house on the same block to remain close to his mother. Through it all, Ernst Reijseger’s score employs echoing horror movie strings for a sense of unknowing dread and anticipation.

So why does he kill his mother? Is he acting out the Sophocles play which he has been rehearsing with his theater troupe? Or does the play merely bring him to a point where he snaps altogether? Who can answer any questions about this film with any certainty? Luckily, Herzog clearly had a sense of humor about his subject. There’s a level of bafflement that gives way to what must be assumed is an intentional, riotous hilarity; indeed, the German director has a wild sense of humor himself, evident in interviews and his willingness to play “The German” in The Grand, a character that mocks Herzog’s own intensity. No doubt Herzog found the real Brad McCullum’s story just as baffling, yet engaging and even humorous.

Perhaps Brad’s distorted, absurdist motivations are what attracted Herzog and Lynch to the atypical project. Whether it’s in the Peruvian jungle in Aguirre, The Wrath of God or Fitzcarraldo, or in the Alaskan wilderness watching bears in Grizzly Man, Herzog’s protagonists often spiral into insanity and obsession. But the nature of Brad’s obsession remains unclear, whereas traditionally Herzog’s protagonists have palpable goals. Therein resides the insanity of the director’s approach, trying to match his filmmaking style with the character’s skewed perceptions of his world.

The admittedly inexplicable purpose of My Son, My Son, What Have Ye Done? hardly seems symbolic, other than to suggest that the world is a peculiar place, and sometimes those peculiarities seep out into mildly coherent stories. How appropriate that Lynch’s name is attached to the project, as these characters, above all Brad, seem birthed from the disturbing view of suburbia present in Lynch’s works, especially Blue Velvet. Even much of the cast has worked with Lynch in the past; but several castmembers have also worked under Herzog. However more Lynchian than Herzogian the film may seem, coming off of last year’s Bad Lieutenant: Port of Call New Orleans, this film feels like a natural drift into the abstract for Herzog and comes highly recommended for admirers of his work.