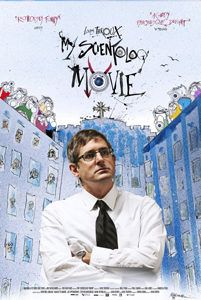 Aside from their bullyingly attained tax-exempt status with the U.S. government, Scientology’s validity as a religion, as opposed to a cult, has been the subject of countless written, televised, and documentary exposés. Each effort approaches their subject with extreme curiosity and a persistent inability to gain a clear view of the secretive behavior demonstrated by the elusive group, created in 1954 by science-fiction author L. Ron Hubbard. Interviews with former members hint at an elaborate scheme to brainwash and profit from its members, while interactions with active figures remain both litigious and belligerent to journalistic inquiries. Such is the case in My Scientology Movie, a documentary that shows how members of the church respond to a documentary about their church. Beyond capturing these unpredictable responses on film, the doc boasts no greater analysis into the church’s operations, though its irreverent comic stuntwork entertains.

Former journalist and BBC personality Louis Theroux charts his own investigation of Scientology by poking the bear and seeing what happens. A far cry from Alex Gibney’s investigative approach of the same subject with Going Clear, Theroux borrows from the Michael Moore method of stunt-driven documentaries. Accordingly, the number of startling facts imparted amount to less substance than the wealth of truth revealed by a few dicey encounters with Scientology foot-soldiers. Out to “defend” themselves, members of the church appear on the scene with cameras shoved in Theroux’s face, assuming their subject will recoil at being recorded (as most apparently do). However, Theroux’s typical response involves dry humor, patient questions (“Let’s talk… We don’t have to be silly about this”), and riotous standoffs in which he records his recorder.

The film consists of Theroux’s attempts to research and shoot a dramatic reenactment of the categorical brainwashing and treatment of Scientology members by current leader David Miscavige. Excommunicated member Marty Rathbun—the inspector general once in charge of ensuring technological adherence to the religion’s official precepts, as well as Miscavige’s right-hand enforcer—provides the substance of these reenactments. Theroux auditions actors to portray real-life figures (actor Andrew Perez, excellent, takes on the role of Miscavige), hoping to reconstruct events as Rathbun remembers them. Meanwhile, Rathbun remains a contradictory figure. He willingly attests to details about the religion’s practices and Miscavige’s volatile behavior, but when Theroux questions Rathbun’s former complicity in such behavior, he becomes antagonistic and defensive. (Theroux’s prodding of Rathbun eventually leads to the film’s quite inconclusive ending.)

Shot mostly in Los Angeles, the film’s detours to the property surrounding the church’s “Gold Base” in Riverside County, California, result in aggressive reactions from Scientology representatives—not to mention tense debates about the public or private status of certain roads, which are simultaneously funny and unnerving. Theroux’s apparent capacity to antagonize the church to the point of retreat results in a few comic victories, although the significance of these skirmishes remains elusive, despite their entertainment value. Theroux doesn’t reveal new secrets, but he explores well-tread material with a sense of humor, while director John Dower captures at least one scene of pure magic: a positively surreal moment when Boardwalk Empire’s star Paz de la Huerta suddenly appears at the window of Rathbun’s hotel room, and afterward Rathbun and Theroux wonder if she was planted.

Talk of Scientology’s more out-there ideas—such as the church’s foundation in the intergalactic traveler Xenu, and the thetans released from his use of hydrogen bombs in volcanoes—or any new information remains untapped in favor of capturing their behaviors on camera. Instead, My Scientology Movie facilitates several alarming moments that allow Theroux to react and perform for the camera, and at the same time expose the church’s tactics. Throughout, there’s a certain lack of commentary, aside from Theroux briefly acknowledging Scientology’s methods fulfillment are similar to most religious systems. Without new revelations or information, the film doesn’t amount to much but a good show. Though, perhaps that’s not enough if, according to accusations, members are being held against their will or threatened by this organization.