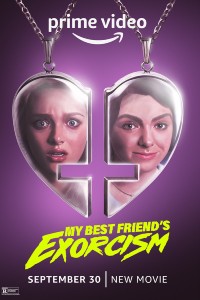 The power of twenty-first-century-brand ‘80s nostalgia compels My Best Friend’s Exorcism. From high-pants fashion to various Culture Club tunes on the soundtrack, the movie is the byproduct of a byproduct. It’s a high-school take on The Exorcist (1973) for a post-Stranger Things audience, lazily compiling pop-culture and genre tropes in a predictable post-post-modern package. Elsie Fisher is the movie’s saving grace, applying her talent demonstrated in Eighth Grade (2018) to another awkward girl role, only a little older this time and thus subject to the demonic torment of high-school bullying. Not particularly scary as a horror movie or relatable as a teen comedy, the scenario is a distempered version of R.L. Stine and John Hughes filtered through the Duffer brothers. While mostly diverting for the 97-minute runtime, it never feels like more than an approximation of the real thing.

Based on the YA novel series by Grady Hendrix, Jenna Lamia’s screenplay doesn’t successfully frame possession as a metaphor for the personality shifts and mood swings teens experience throughout adolescence. Regardless, the story centers on a four-girl friend group from diverse backgrounds and superficially developed feminist perspectives. Fisher plays Abby (nicked named “Abby Normal” by some of her classmates), the inward and awkward one from a working-class family. Abby’s BFF is Gretchen (Amiah Miller), who comes from an elitist family that disapproves of her inseparable friendship with Abby. Margaret (Rachel Ogechi Kanu) is the most sexually experienced one, obsessing over her appearance and flouting her horndog boyfriend Wallace (Clayton Royal Johnson). And Glee (Cathy Ang) quietly maintains a crush on Margaret.

When the four of them spend a night at Margaret’s family cabin for a girl’s sleepover, Wallace ruins the chill mood when he shows up with some light psychedelics and demands everyone go skinny dipping. Later, Abby and Gretchen explore the surrounding woods and find a creepy old abandoned building, rumored to be the site of a satanic ritual. Inside, they’re confronted by whispers, enveloping darkness, a bizarre eyeball creature, and a demonic voice that declares, “Mine!” Although the audience learns an entity has inhabited Gretchen’s body, Abby assumes her friend’s sudden antisocial behavior stems from an assault by Wallace. But that false assumption is quickly dismissed after Gretchen’s projectile vomiting and public displays of urination at school. Given that these incidents would be enough to humiliate any teen, it’s odd that her peers don’t tease her; instead, she arrives at school with a makeover and a man-eater look in her eye reminiscent of Meagan Fox in Jennifer’s Body (2009).

Set squarely in the Satanic Panic, the movie doesn’t do much with this detail beyond a few fleeting references. Helmer Damon Thomas—whose directorial work consists of various TV movies and series—brings a mostly superficial ‘80s-ness, including an overreliance on yogurt jokes. Ryland Blackinton’s synth score helps capture the era’s vibe without the production having to spend too much on its familiar needle drops. Unfortunately, production designer Bruce Curtis and costume designer Ariyela Wald-Cohain never convince us that we’ve been transported to another era, leaving the movie to feel like a back-to-the-’80s party. The peripheral CGI owls and raccoons don’t help, nor do the other spots of cheap special FX. However, the proceedings are at their best once Gretchen starts pitting her friends against each other in sometimes morbid ways, even if they rely on some underwhelming effects.

What works best is Fisher, whose ability to portray a vulnerable teen with sensitivity elevates this familiar supernatural teen horror yarn. When mean girls pick on Abby for her acne, Fisher’s wounded response feels genuine. Also entertaining are the Lemon Brothers, a Christ-loving trio of bodybuilders that performs at high schools and malls, enlisting kids along the way. Chris Lowell plays the weakest brother, Christopher, enlisted by Abby to exorcize Gretchen. While the actual exorcism sequence is rather dull and the least compelling part of the movie, Lowell brings his familiar comic energy, as seen in his role on Netflix’s Glow. Instead, the biggest shocker is that Abby reveals she’s Jewish, despite attending a Catholic school; however, barely any screen time is spent exploring her suppressed Jewish identity. Debuting on Amazon Prime Video, My Best Friend’s Exorcism is interesting enough to keep you watching. But it doesn’t amount to much beyond a clunky homage to other horror movies and some unconvincing ‘80s nostalgia.