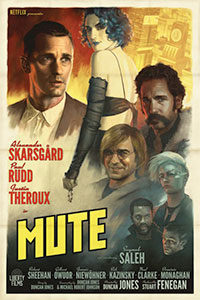 Duncan Jones borrows a familiar sci-fi noir aesthetic for his latest genre effort, Mute, saturating his film in the rain-drenched neon trappings of Blade Runner (1982) and its sequel Blade Runner 2049 (2017). Serving as co-writer and director, Jones offers a moody, wordless pseudo-detective who explores the future’s Berlin—a metropolis of flying cars, drone-delivered fast food, and kinky sex-bots—to find his missing girlfriend. Overly dependent on the gorgeous production design by Gavin Boquet, the project lacks a narrative throughline or sympathetic characters, and the script’s derivative ideas have been written with tonal deafness and heavy-handedness. Watching such an uneven experience is even worse because Jones has clearly focused his mourning over his father’s death into the film, which is dedicated to the late David Bowie and Jones’ nanny, his “second mother” Marion Skene. Sadly, Mute disappoints in the worst way, by evoking only bothersome indifference.

Debuting on Netflix with all the ceremony of garbage day, Mute marks the second Jones feature in a row that many consider an absolute failure. And while this critic will continue to defend and praise the silly delights of Warcraft (2016), Jones’ Source Code (2011) remains a logistical mess, whereas his latest commits the crime of being uninteresting. He conceived the idea for Mute years ago, having talked about the concept during the 2009 press tour for his debut, the masterful Sam Rockwell showpiece Moon. Since then, he’s struggled to secure financing and distribution for this “spiritual sequel” to Moon. Fortunately, Netflix will gladly pay anyone too much for projects that major theatrical distributors refuse to touch just to fill their content quota. But don’t confuse Mute with the usual Netflix fodder; there’s evidence of a grand vision here. The story just never grabs its audience.

Alexander Skarsgård lends his evocative eyes to the film’s techno-resistant Leo, a silent Amish hero and man out of time (given that he spends his time making wood carvings of dolphins, he belongs in the 1990s). As a boy, Leo’s voice box was damaged in a boating accident, and his mother refused him treatment due to their religion, leaving him unable to speak. Now a bartender at an underground club owned by the gangster Maksim (Gilbert Owuor), Leo pines after his blue-haired Iranian lover, Naadirah (Seyneb Saleh), who confesses that she has secrets. But as long as they have love “nothing else is important,” he writes in his notebook, his primary method of communication and doodling. All seems overly optimistic and ideal, with plenty I Love Yous between Leo and Naadirah before she disappears. To find her, Leo searches the seedy Berlin underworld of prostitution, pedophilia, and Aladdin Sane facepaint. 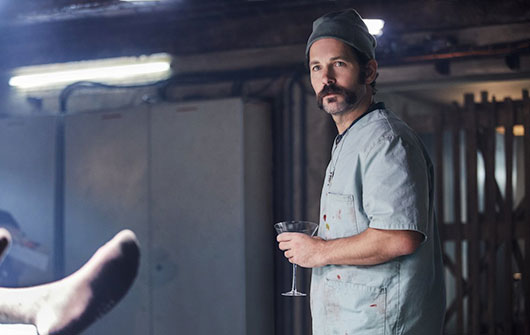 Meanwhile, Jones offers a concurrent strain following Cactus Bill (Paul Rudd) and Duck (Justin Theroux), two AWOL American military surgeons hiding out in Berlin and torturing people for the Russian mob. The former hopes to secure fake passports so he and his daughter can escape back to America, while the latter is content running a robotic prosthetic practice as an excuse to spy on little girls. Dressed in Hawaiin shirts and sporting a horseshoe mustache, Bill is an abrasive, hostile, and ever-gum-chewing character that uses Rudd’s natural charm for all the wrong reasons. Duck looks like a pedophile with his cardigan sweaters, flat hair, and perverse sense of humor. Jones writes these two characters as chummy pals, sometimes playing them for comic relief. For instance, Bill leaves his daughter at a brothel instead of hiring a babysitter, but ironically he instructs the prostitutes not to give her soda—because it’s bad for her. It’s a jarring misjudgment of character, humor, and tone that remains detrimental to the entire film.

Co-written by Michael Robert Johnson, the script eventually connects Leo’s search for Naadirah with Russian gangsters and then, predictably, leads him to both Bill and Duck. Along the way, there are detours involving the sassy sex-worker Luba (Robert Sheehan), a geisha-clad Dominic Monaghan, and even a passing appearance by Sam Rockwell as Sam Bell, his character from Moon. But early on, the viewer will notice a rampant obviousness that persists throughout Mute, both in terms of plot and theme. Jones juxtaposes his unspeaking hero with a chatterbox-of-a-villain, he contrasts Leo’s simple lifestyle with the oppressive technology of the future, and he resolves the conflict with that foreseeable moment when Leo finally speaks. It doesn’t help that Leo isn’t the brightest bulb. In one sequence, because he’s technologically limited, he spends days looking for a telephone number in a stack of phone books. It’s meant as a symbol of his doggedness to find Naadirah, but it’s about as interesting as, well, watching someone read a phone book.

Because the material remains so unengaging, my mind could not help but wander during the film, which is never a good sign. I found myself thinking about the narrative structure, and I could see the screenwriting at work. And Mute is the kind of film that treats its developments as revelatory, even though you figured them out an hour earlier. I wanted to love Mute, I really did. Regardless of his inconsistent output, Jones is a fascinating filmmaker. But the film’s inconsistent use of mood and plotting is evident within the first few minutes, and it only becomes worse in the ensuing two hours. Clint Mansell’s generic score doesn’t improve matters, as it belongs on a cheesy television drama, but then so does the dialogue. At least the film has plenty of neat sci-fi details and atmospheric visuals, and cinematographer Gary Shaw captures this futureworld with a lovely use of color, informed by countless cyberpunk and techno-centric genre sources. Of course, a setting isn’t a film, and Jones fails to create characters or situations that stir our emotions, leaving Mute feeling empty and transparent.