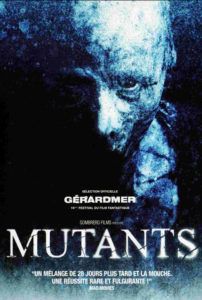 Almost every zombie movie contains a character who can’t accept that a loved one will turn into one of the undead. Lost in denial, they ignore the physical signs, the visible and no doubt odorous evidence of rot. And when the loved one eventually becomes a flesh-eater, our character either resolves to finally put the creature out of its misery, or they become lunch because they can’t pull the trigger. This scene usually occupies five minutes of screentime or less, acting as a twisted aside of zombie horror. Only recently, with last year’s Grace, have horror filmmakers realized the (twisted) dramatic potential for dragging out such a story.

In what’s being called ‘the French 28 Days Later,’ David Morley’s Mutants considers such a character as the protagonist of its story. The setting is in the aftermath of a deadly virus outbreak. Survivors are few and far between, as the virus, we assume, has wiped out most of the population. The action takes place in the mountains where the screams of the infected echo eerily through the woods. Sonia (Hélène de Fougerolles) and Marco (Francis Renaud) have taken an ambulance and search for an army base that supposedly has the answer to infection. And after an altercation with the infected that leaves Marco with a gunshot to the belly and infected blood spat in his mouth, they come upon an abandoned complex and take shelter to recuperate.

They suspect Marco may be infected, and their suspicions are confirmed when his wound completely heals overnight. Sonia is desperate to keep him alive, despite him obviously being infected and soon susceptible to the infection’s violent influence. But, because she didn’t turn after being bitten by an infected two weeks ago, she believes she’s immune. So she gives Marco blood transfusions and hopes her blood will help him. Meanwhile, she calls for help to the unresponsive army unit that exists somewhere in the mountains. All the time Marco is getting worse—he loses his hair, his skin color goes pale, his teeth fall out. And despite Marco’s pleas for Sonia to just put him out of his misery, she continues to care for him.

Back and forth, Marco goes from being himself, to a screaming and bloodthirsty infected. One scene features him naked and covered in blood, chasing Sonia down a hallway. Regardless, after Sonia has barricaded herself behind a strong door, Marco’s whimpers of normality convince her to trust him again. This happens several times throughout the story. By the end, after she’s mistakenly trusted her zombified husband over and over, it’s easy to label her the stupidest movie heroine ever. When viewing Mutants, much energy is wasted throwing your hands in the air, or, for home screenings via VOD, yelling at the television screen at Sonia’s dim behavior. When so many zombie movie characters in the films of George A. Romero (Night of the Living Dead, Dawn of the Dead) learn quickly not to cling onto those who’ve been bitten, often resulting in abrupt gunshots to the head, it’s hard to watch a character that time and again doesn’t learn her lesson. Perhaps if she was depicted as crazy, the audience might be able to accept her lack of common sense; but she’s represented as sane for the duration, making her behavior simply intolerable.

During the second half of the movie, the infected turn into hissing mutant-things with bloated black skin and sharp teeth, akin to the bat creatures from The Descent. They’re not zombies, but they serve the same function: they run in hordes, and they’re messy eaters of human flesh. One wonders where such a virus comes from, since the movie never explains. Has there ever been a virus that turns people into ferocious monsters? Anyway, when Marco begins to digress, Sonia locks him in a caged cell because she refuses to kill him. The crazy things that love will do, huh? Soon other survivors come into the picture, and you can bet that mutant-Marco doesn’t like them around his girl.

Morely shoots the picture in the Shaky Cam style that made Danny Boyle’s 28 Days Later stylized and involving. Here the effect is distractingly derivative and occasionally unintelligible. Furthermore, there’s no social commentary at work, which is usually the prerequisite for great zombie horror. Though Morely and his co-writer Louis-Paul Desanges incorporate a humorless, somber tone, their approach is a false way of creating substance. They take their scenario perhaps too seriously, and when there’s nothing being said through the film’s seriousness, it falls completely flat. Maybe if they had embraced either the macabre nature of the central relationship to more disturbing degrees, or had more fun with their zombie-esque plot, Mutants would have been the challenging horror movie that the filmmakers clearly hoped it would be. As is, the result is just another bland entry in a sub-genre that’s nearing the line of overexposure, if it hasn’t already crossed over.