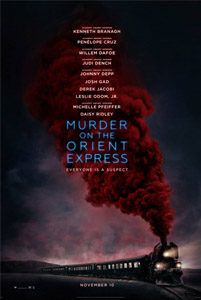 Agatha Christie’s Murder on the Orient Express was first published in 1934, and it touched a nerve among the era’s readers. Adaptations of the mystery—whose various stage and screen versions were never better than Sidney Lumet’s 1974 film starring Albert Finney, Sean Connery, Lauren Bacall, and Ingrid Bergman—depend largely on the treatment, its faithfulness (or not) to the novel, and how well it tackles the unconventional ending. With this in mind, consider yourself warned that plot details about director Kenneth Branagh’s new film of Murder on the Orient Express will be discussed throughout this review. After all, besides the quirky characters and Christie’s charming prose, the ending is what resonated so much with readers of the era, even if Christie herself believed it improbable, and for good reason. The story investigates the death of a passenger on the famed locomotive departing from Istanbul, and the victim was inspired by the kidnapper and murderer of Charles Lindbergh’s son. Given Lindbergh’s status at the time as an international hero, media coverage of the real-life kidnapping appeared in every newspaper across the globe in 1932, lasting until 1936, when the convicted Bruno Richard Hauptmann was executed for his crimes. Hauptmann became a detested villain in the media, despised the world over, wanted dead by everyone, and Christie tapped into that for her conclusion.

Following in the tradition of all-star ensembles to populate his version, Branagh enlists a roster of established icons and promising newcomers for his cast: Judi Dench, Michelle Pfeiffer, Derek Jacobi, Willem Dafoe, and Johnny Depp make up the former category; Daisy Ridley, Leslie Odom Jr., Tom Bateman, and Josh Gad make up the latter. Of course, Branagh reserves the juiciest role for himself: Christie’s world-famous Belgian gumshoe Hercule Poirot. The fastidious character first debuted in 1920’s The Mysterious Affair at Styles, followed by more than 80 subsequent appearances in novels and short stories. Played by over twenty of the finest actors in history (including Finney, Charles Laughton, Orson Welles, Peter Ustinov, Ian Holm, and Alfred Molina), Branagh’s take is playful and comic—with just the right amount of moral certainty to be tested. He performs the role from behind an ostentatious salt-and-pepper mustache that has a set of hilarious mustache wings. His thick accent, miraculous detection skills, and taste for the finer indulgences in life make him an almost absurd role in the best of ways, and Branagh gives the part his high-energy finesse, making his version among the best Poirots ever filmed.

Branagh’s use of visuals and approach to the story’s well-known finale are less successful. Shooting in 65mm celluloid, the film nonetheless looks like a digital concoction. Vast, cartoony-looking CGI landscapes render the opening shots of Istanbul in a wonderful preface that demonstrates Poirot’s expertise and showmanship. Then the famed Orient Express sets out onto a videogame arena, the mountains and skies painted in pastel brushstrokes meant to imitate magic hour lighting. Fortunately, production designer Jim Clay has overseen a splendid traincar set-piece and interiors, capturing the elegance and romanticism of the traingoing experience, but most of them have been augmented by animated backdrops. No matter, as the mystery at the film’s center draws our attention away from cinematographer Haris Zambarloukos’ sweeping-yet-CGI-heavy camerawork and places it on the ensemble inside the train. Depp plays Samuel Ratchett, an alias for Lanfranco Cassetti, the man known to have kidnapped and murdered the 3-year-old daughter of a famed American pilot and his heiress wife. When Ratchett is found dead, the train’s director Buoc (Tom Bateman, excellent as a permissive cad) urges Poirot to investigate. With the train conveniently stuck in snow in the mountains, Poirot has time to devote his attention to the case. 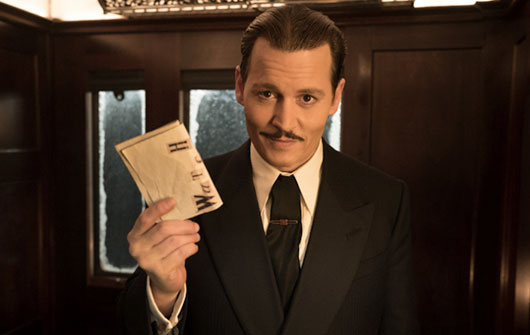 Despite the familiar faces playing suspects, much of the cast disappears into their relatively small roles, each defined by a few precise scenes—most culminating with a face-to-face interrogation opposite Poirot. Among the best, Pfeiffer inhabits the boozy flirt Mrs. Hubbard, always the loudest person in the room. Dench uses her status as acting royalty to inform the Russian Princess Dragomiroff, and Olivia Colman plays her servant. The modestly garbed religious zealot Pilar is an unlikely role for Penélope Cruz; just as unlikely is Gad as Hector MacQueen, Ratchett’s shifty accountant. Jacobi, having collaborated with the director a handful of times (beginning with his 1989 debut Henry V), serves as Ratchett’s imbittered attended. Going over the entire roster here is unnecessary, though, as Branagh remains center stage for the duration, rushing about the cramped locations on the train in perfect clarity thanks to Zambarloukos’ creative angles. By the finale, Branagh puts his entire cast on display in a shot modeled after Da Vinci’s The Last Supper, and it’s an image whose purpose in this context remains elusive.

Refreshingly and unexpectedly, the screenplay by Michael Green inserts plenty of relevant commentary about racial diversity. At one point, when interviewing Daisey Ridley’s Miss Mary Debenham, Poirot addresses her clandestine romance with Dr. Arbuthnot (Leslie Odom Jr.), a character of color. “This isn’t America,” he says, acknowledging her apprehension. “What you’re doing is not illegal.” And with that, American viewers shrink in their seats out of historical embarrassment. Elsewhere, Willem Dafoe’s Austrian lecturer Gerhard Hardman pronounces sentiments that echo Nazism, creating an element of racial conflict among the passengers, including Manuel Garcia-Rulfo’s latino car salesman. A cosmopolitan champion of marginalized groups here, Poirot’s defense of these characters on racial terms makes for an inspired undercurrent. Although, he hardly defends their moral indiscretions. In the famous ending, Poirot assembles his cast of suspects and offers two possible scenarios: 1) the killer was an unknown passenger that killed Cassetti and then slipped off the train, or 2) every passenger on the train had the motive to kill Cassetti and worked together to carry out his murder in a vast conspiracy. Branagh’s film engages in a teary, sensational response from the suspects, leading to an outright confession and certitude of their cumulative guilt. Lumet’s solution was more elegant: silence from the entire group.

Nevertheless, Branagh’s take on the ending remains truer to Christie’s novel than Lumet’s, and so perhaps complaints about the unambiguous ending are unfounded. The above-noted quibbles aside, what remains most pleasurable about Murder on the Orient Express is the stylish and classical quality of the storytelling; it’s an old-fashioned sort of murder mystery in more than the obvious ways. Watching Poirot navigate the train, interview his suspects, and grow more confounded with each interaction is a rare delight. Savor it, as today’s Hollywood seldom adapts these archetypal whodunits anymore; more commonly, such stories are relegated to masterpiece theater or underwhelming made-for-TV movies. Branagh infuses the material with a (sometimes misguided) majesty and grandiosity befitting the iconic material. When he isn’t acting against a CGI backdrop, it’s a joy to watch his Poirot fuss over his particular tastes regarding cuisine and social decorum—not to mention an obsessive-compulsive need for straightened neckties and balanced footing—and thrilling to watch the character deliberate over clues and personalities. And while the artificial visuals threaten to prevent the viewer’s immersion into Poirot’s nineteenth-century world, Branagh’s Murder on the Orient Express contains enough pleasures to recommend.